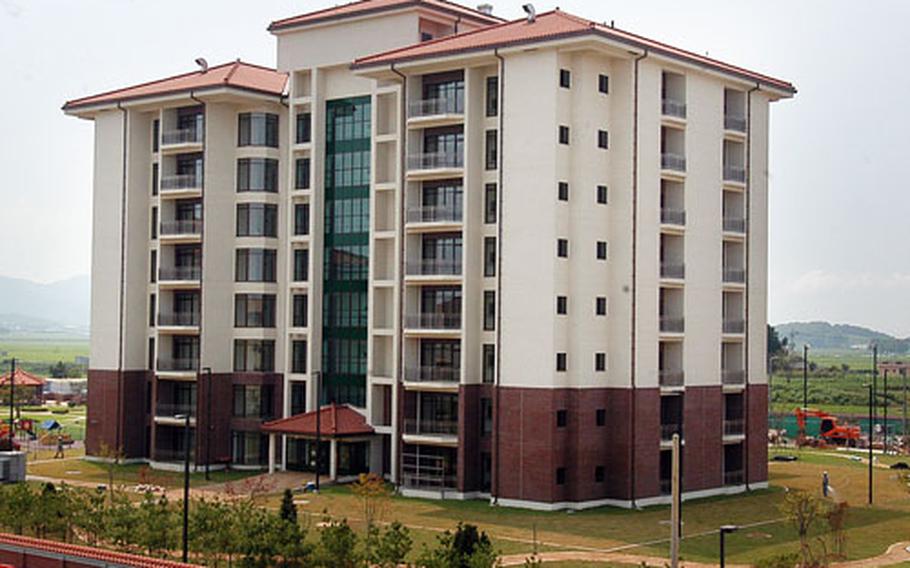 It will provide immediate on-post housing for about half of the 115 command-sponsored families that currently live off-post, officials said. Families will start moving in sometime this week.

The 48-apartment tower is the second building in what eventually will be a three-building, $40.7 million housing complex. The first building, a five-story, 52-apartment structure, opened in 2003. A third building set for completion in May 2007 is to have seven stories and 42 apartments.

Of people being moved on post, about one-third will live in the new building, said Furman Neeley, a spokesman for the Army&#8217;s Area III Support Activity at Camp Humphreys.

Also slated for residence in the new building are some families that have been housed temporarily on post in the Camp Humphreys Army Lodge, as well as some families of servicemembers who will eventually be assigned to duty at the post, he said.

The two-story garage has 220 parking spaces. Elevators in the second and third buildings will get residents to the parking garage. Residents of the first building will walk from their lobby to a street-level elevator to the garage.

Officials were to mark completion of the second tower and the garage with an 11 a.m. ribbon-cutting ceremony Monday at the building.

Also coming into service is a landscaped park at the complex that includes green space, barbecue areas, a multipurpose athletic court, a playground and a central utility plant that houses heating and cooling equipment for the apartment buildings, said Greg Reiff, resident engineer with the U.S. Army Corps of Engineers&#8217; Far East District resident office at Camp Humphreys.

All apartments in the complex have two bathrooms, a separate family room, laundry room and storage, he said. Master bedrooms have walk-in closets. Living rooms and hallways have hardwood floors.

The project is part of an ongoing effort to prepare Camp Humphreys to become the U.S. military&#8217;s main installation in South Korea, officials said. The 1,230-acre post is slated to triple in size by 2008 and see a big increase in its number of families.

The Pumyang Construction Company Ltd. of Seoul built the second tower and parking garage and is building the third, under contract with the U.S. Army Corps of Engineers.