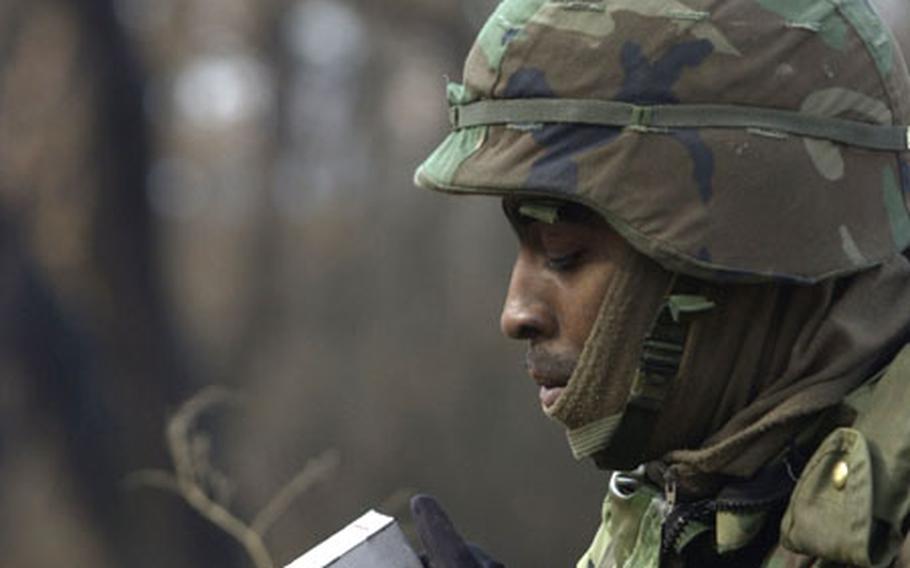 U.S. Army Corporal Wesley Ealim peers into a rodent trap that has been sprung to determine whether a field mouse is inside. (Greg L. Davis / S&S)

U.S. Army Corporal Wesley Ealim peers into a rodent trap that has been sprung to determine whether a field mouse is inside. (Greg L. Davis / S&S) A metal rodent trap is labeled in both English and Hongul to warn rice farmers from removing the important scientific tool, which is used to collect field mice for study. (Greg L. Davis / S&S)

Ealim, a preventive medicine specialist with the 5th Medical Detachment, peered inside and leaned back slightly when he spied the prize &#8212; a small, brown field mouse that roams the soggy rice paddies.

The unlucky rodent was tempted by the peanut butter and cracker meal stuck to a cotton ball inside the trap. The 5th Medical Detachment &#8212; in the field last week for training &#8212; catches the scurrying mammals to test them for Korean hemorrhagic fever.

Caused by the Hantaan virus, the fever can be passed by rodent urine and feces, said Maj. Jason Pike, commander of the 5th Medical Detachment. Soldiers from his unit are catching rodents to test them for the virus; a U.S. soldier in the field could contract the virus.

It can cause a variety of flu-like symptoms, leading to renal failure and shock, according to the U.S. Air Force School of Aerospace Medicine.

However, there have been no reported cases involving U.S. soldiers in South Korea in the last year, Pike said.

But years ago, the virus bloomed. During the Korean War, about 3,000 U.N. Command soldiers contracted it.

In 1994, eight cases among U.S. soldiers were reported with one fatality, according to the Army Medical Surveillance Activity, part of the U.S. Army Center for Health Promotion and Preventive Medicine. In 1995, three soldiers &#8212; two of whom participated in field exercises &#8212; contracted the fever. In 2001, the Korea National Institute of Health reported 323 cases of Korean hemorrhagic fever. Farmers in rural areas are more at risk, as they are more likely to kick up and inhale dirt with the disease, Pike said.

Some small rectangular metal traps are laid in a linear row along the edges of rice paddies where the rodents live. Others are randomly scattered in the thick matted brown grasses just beyond the fields.

After they take the bait, the rodents are shipped to Seoul. In the 5th Medical Detachment&#8217;s office, they are combed, Pike said. The collected matter is tested for the fever, he said.

The rodents then go to Korea University, Pike said, where a blood sample is drawn and tested for the virus.

More medical personnel would be sent to study the area and determine how to prevent the spread, such as putting down materials on the ground to stop kicking up dust, Pike said. Other safety measures include masks to prevent inhaling dirt, ensuring garbage is kept tidy and frequent hand washing.