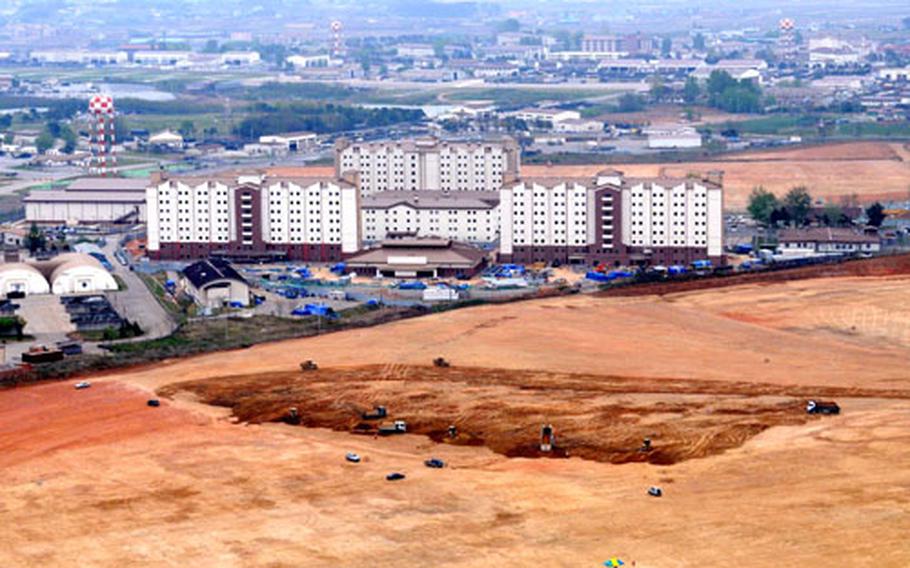 An aerial photograph taken Tuesday shows Camp Humphreys in South Korea and part of the new land onto which the post will expand by 2012. The first construction on the Parcel 1 of the new lands, seen in foreground, is to start in early June. In the background are new eight-story barracks and a dining hall in the post’s MP Hill area. (Bob McElroy / U.S. Army)

PYEONGTAEK, South Korea &#8212; The long-awaited work on the first buildings set for construction on Camp Humphreys&#8217; new lands will kick off in June.

Six eight-story barracks are the first of many structures that will go up under plans to transform Camp Humphreys by 2012 into the U.S. military&#8217;s flagship installation in South Korea.

The post is to triple in size by expanding onto a large tract set aside for the project under a South Korea-U.S. agreement.

Fred Davis, Army Relocation Program manager at Camp Humphreys with the U.S. Army Corps of Engineers&#8217; Far East District, said the first piles should go into the ground by early June for construction of four barracks. The Hanwha Engineering and Construction Co. Ltd. of Seoul will build those.

Sometime in mid- to late July, work should start on two additional barracks, to be built by Shinsung Engineering and Construction Co. Ltd. of Seoul.

All six will go up on a 205-acre tract planners call Parcel 1.

Each will house up to 302 servicemembers. Each suite will consist of two bedrooms with a shared common area that includes a kitchenette, Davis said.

Meanwhile, workers will begin readying another tract of new land, 110-acre Parcel K, for its first round of eventual construction, he said.

Workers this week will begin the first steps toward laying landfill on Parcel K and aim to have it ready for building by spring 2009, Davis said.

In spring 2009, work will begin on the first six family housing towers, an elementary school, a high school, a communications center, and three maintenance complexes with administrative space, variously on Parcels 1 and K, Davis said.

In addition, on a timetable still to be set, a hospital and dental clinic, as well as headquarters buildings, are planned for inside the existing installation, where major construction is also under way as part of the expansion.