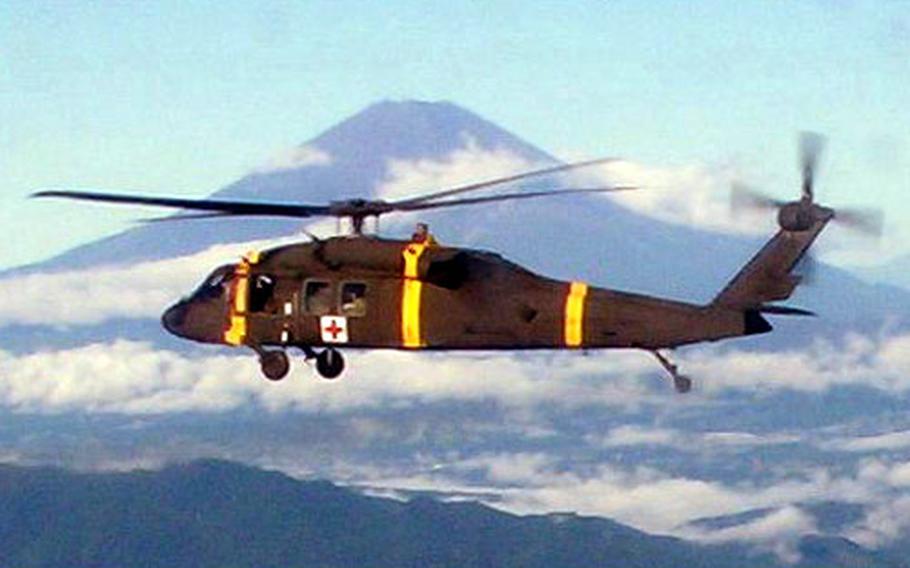 A South Korea-based U.S. Army dustoff helicopter passes Japan&#39;s Mount Fuji on Oct. 6 on its way back to Camp Humphreys in South Korea at the end of a training mission at Misawa Air Base, Japan. (Curtis Ross / Courtesy of U.S. Army)

A South Korea-based U.S. Army dustoff helicopter passes Japan&#39;s Mount Fuji on Oct. 6 on its way back to Camp Humphreys in South Korea at the end of a training mission at Misawa Air Base, Japan. (Curtis Ross / Courtesy of U.S. Army) Airmen from the hospital at Misawa Air Base in Japan rush a mock litter case from a South Korea-based Army dustoff helicopter Sept. 22 during joint training at Misawa. Three Black Hawk medevac helos of the Army’s 377th Medical Company (Air Ambulance) flew by stages from their Camp Humphreys base in central South Korea to Misawa to give airmen insights into Army helicopter medevac methods. (Curtis Ross / Courtesy of U.S. Army)

CAMP HUMPHREYS, South Korea &#8212; Army 1st Lt. Sascha Gerber remembers that a lot of fellow pilots had doubts when the word got around that some Army aviators might try a helicopter flight from this base in central South Korea all the way to northern Japan.

Not that anyone doubted the abilities of the 377th Medical Company (Air Ambulance), whose crews are trained in helicopter &#8220;dustoff&#8221; &#8212; picking up wounded troops off the battlefield and rushing them to a field hospital.

But the flight would entail enormous red tape &#8212; getting all sorts of advanced written clearances for international flights and for landing at this or that airfield; customs paperwork; plus the usual intricate mission planning &#8212; where to refuel, where to lodge and feed the crews, and so on.

But more than that, who&#8217;d heard of sending South Korea-based medium-lift UH-60 Black Hawk helicopters on a 1,200 mile flight that would take land-based Army aviators over the broad waters of the Sea of Japan? And do the whole thing on about three days&#8217; notice?

But on Sept. 19 &#8212; after three short days to get ready &#8212; three Black Hawks and 18 crew lifted off from Camp Humphreys on a training mission to Misawa Air Base in Japan.

Their job at Misawa would be to give several days of training to base hospital staff from Misawa&#8217;s 35th Medical Group.

But to give the fullest training benefit possible, the preparatory stages of the mission were assigned as a mock natural disaster mission.

It was a bright, sunny Sunday when they took off around 1:30 p.m. from Humphreys and went south to the Walker Army Heliport in Taegu, South Korea. They spent the night at the heliport.

The next morning at 7:30 they were again in the air, headed across the Sea of Japan for Fukuoka International Airport on the Japanese island of Kyushu.

&#8220;The biggest unusual other than the distance would be the over-water portion,&#8221; Humphrey said of the mission. The crews had to take special courses in ditching procedures &#8212; how to survive ditching at sea.

On Gerber&#8217;s Black Hawk, he noticed a change came over everyone as they headed out with nothing but the trackless sea below them.

Some 90 minutes later they landed at Fukuoka. It was around 9 a.m. They were there an hour, refueling and doing customs paperwork. Each of their next several stops was also about an hour, mainly for refueling: Fukuoka to Takamatsu, a Japanese military-civilian airport, arriving there at 11:30 a.m.; then on to an airport in Nagoya, arriving there at 2 p.m.; then to Camp Zama, arriving at 4:30 p.m.

Because of the time, they stayed the night. The next day, Sept. 21, one Black Hawk that was equipped to fly in low-visibility weather took off, made a fuel stop at Sendai, and flew on to Misawa. The next day the remaining Black Hawks flew to Sendai and then to Misawa.

&#8220;Basically &#8216;Medevac 101&#8217; for their personnel,&#8221; said Humphrey. Dentists, physicians, hygienists, some Army personnel and some Japanese military personnel were among those who turned out for training.

Dustoff crews showed them the aircraft and its key parts, including the swiveling &#8220;carousel&#8221; on which litter patients are placed. They got to practice calling in missions over a field radio.

They readied mock litter patients for flight, and practiced putting them aboard. Then they themselves got aboard and the pilots took off, giving the airmen a feel for what it&#8217;s like when a dustoff Black Hawk churns past the landscape at 220 mph or more to speed a victim to a hospital.

For Spc. Patrick Chapman, a flight medic who taught medical classes, getting to see how the Air Force and Navy operate was a useful part of the training.

Because of rough weather in Japan, including a typhoon that was eventually downgraded to a tropical storm, the crews were stuck for days beyond their original return date.

But on Oct. 6 they left Misawa and, repeating the same refueling stops in reverse, they flew out over the sea and were soon again in sight of the rugged mountains and green rice fields of the Korean peninsula. After a night&#8217;s stay in Taegu they landed back at Humphreys on Oct. 7.

The company has searched records and believes they&#8217;re the first helicopter unit to &#8220;self-deploy&#8221; from South Korea to another country for a training mission.