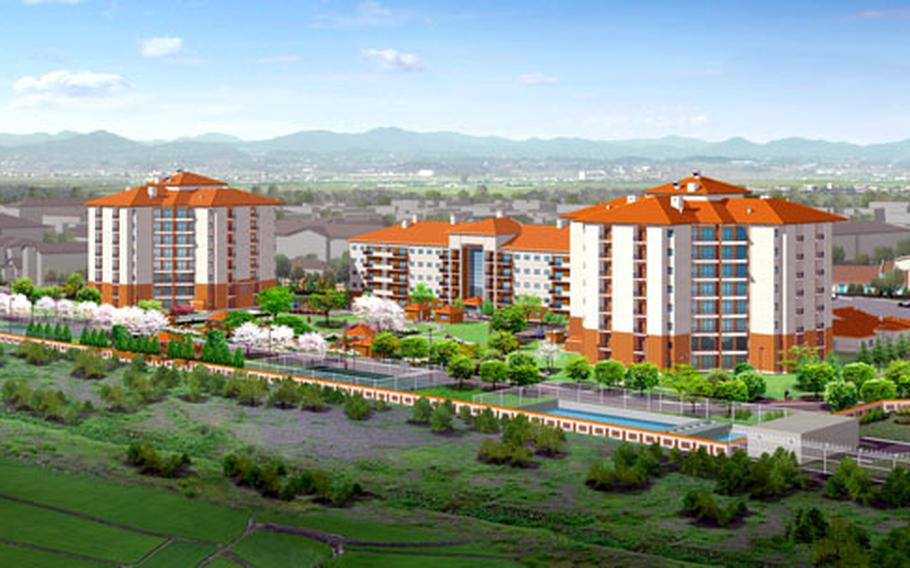 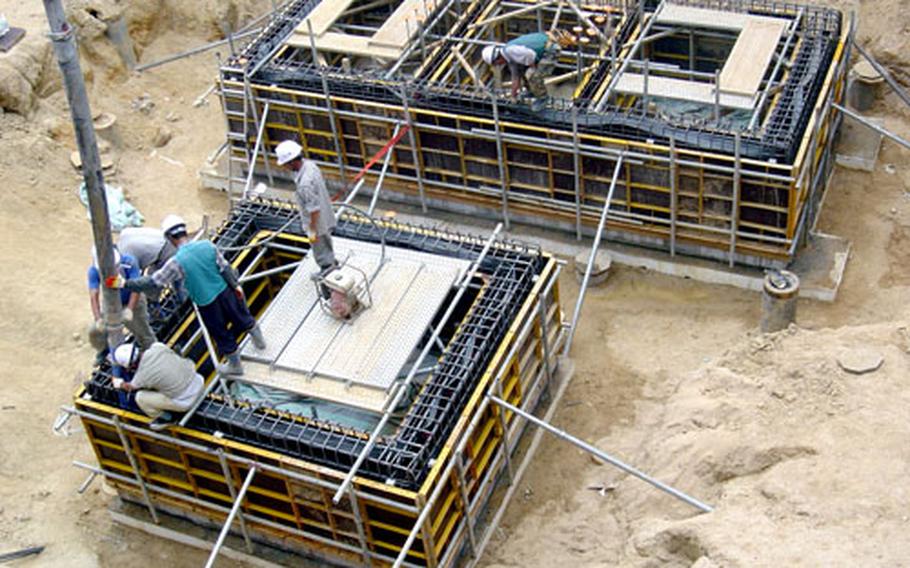 At Camp Humphreys, South Korea, in June 2004, workers pour concrete in what will become elevator shafts of an eight-story family housing tower, one of two slated for construction at the site. Snags have put completion of the project months behind. (Nick Konovodoff / U.S. Army)

PYONGTAEK, South Korea &#8212; Construction will be finished later than expected on a family housing complex at Camp Humphreys in South Korea, planners say.

Plans call for a three-building housing complex with an underground garage, picnic areas and playgrounds at a projected cost of $40.7 million. The first building, five stories tall, was finished in September 2003.

An April 2006 completion date for one of the two towers is about four months beyond the original plan. And the other tower now is set for a May 2007 completion, about five months later than planned.

Causing the delays were several factors, including complications that arose in laying foundation piles, the need to relocate sewer and communication lines and a building that housed AM/FM antennas, Dennis-Pe&#241;a said. Also, land on which the central utilities plant for apartment towers is to be built currently is the site of another building still in use. Base officials first must relocate occupants so the building can be demolished, she said.

&#8220;For the central utility plant, essentially, we could finish the structure of the building for the tower,&#8221; she said. &#8220;However, we would not be able to run, say, the mechanical, which would encompass water, electrical.&#8221;

She said she was told at a meeting Tuesday that the occupants in the building to be razed might be relocated &#8220;quite soon.&#8221;

The two towers will be identical, each with 48 apartments and three elevators running to the below-ground garage. Residents of the existing five-story building will walk from their lobby to a street-level elevator to the garage.

The complex is one of numerous projects for expanding Camp Humphreys into its future role as the U.S. military&#8217;s largest installation in South Korea.

Under plans worked out between South Korea and the United States, U.S. forces in and north of Seoul would relocate to the installation. By 2008 it is to serve as headquarters for U.S. Forces Korea and other commands.