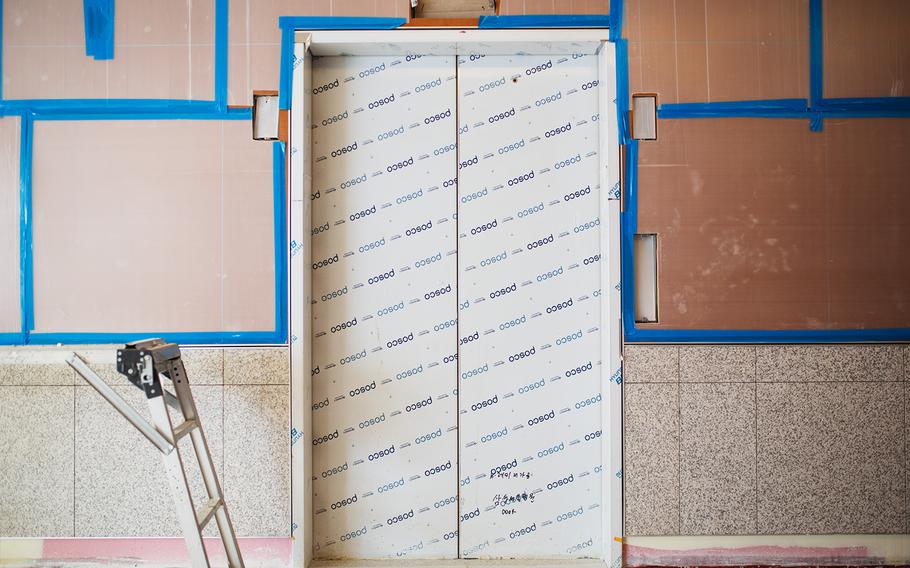 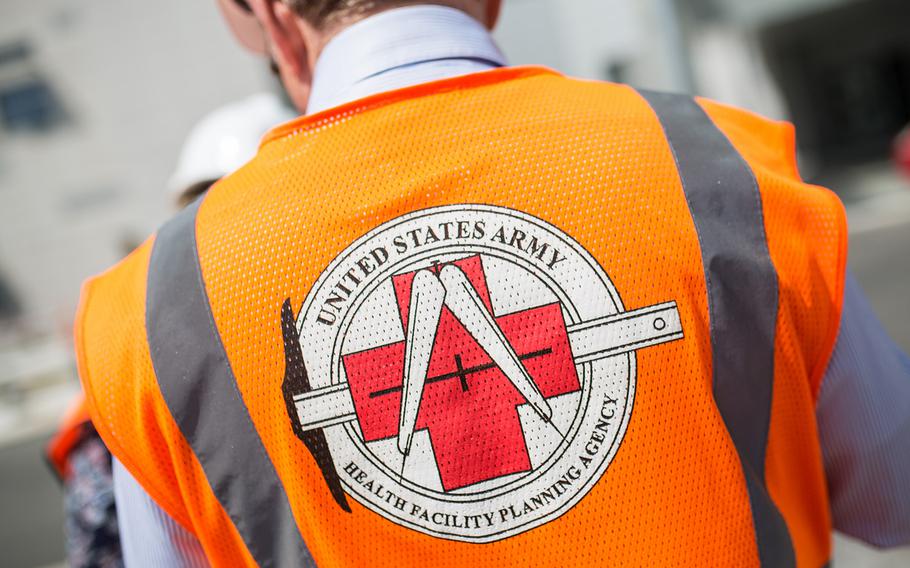 The back of a reflective vest is seen at the hospital under construction at Camp Humphreys, South Korea, Wednesday, April 18, 2018. (Marcus Fichtl/Stars and Stripes) 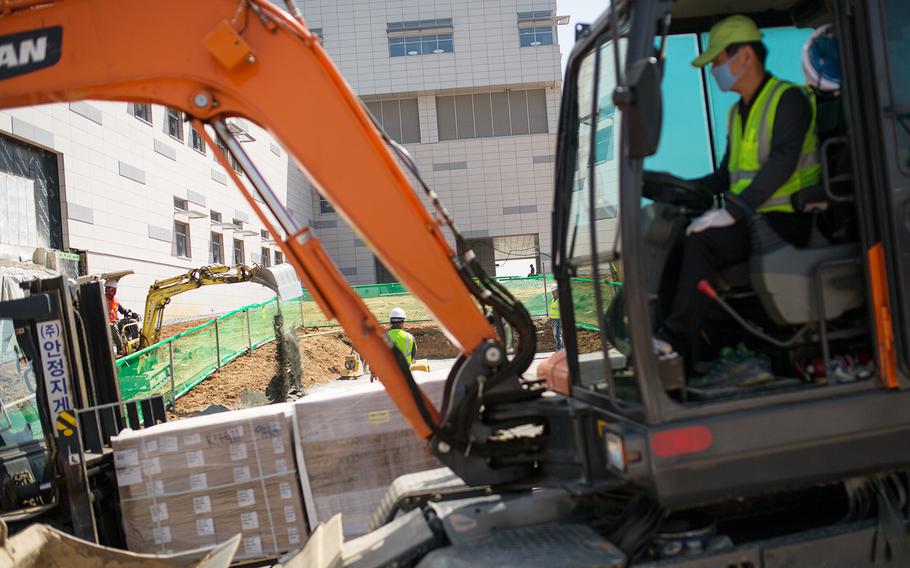 Workers develop the exteriors to the hospital under construction at Camp Humphreys, South Korea, Wednesday, April 18, 2018. (Marcus Fichtl/Stars and Stripes) 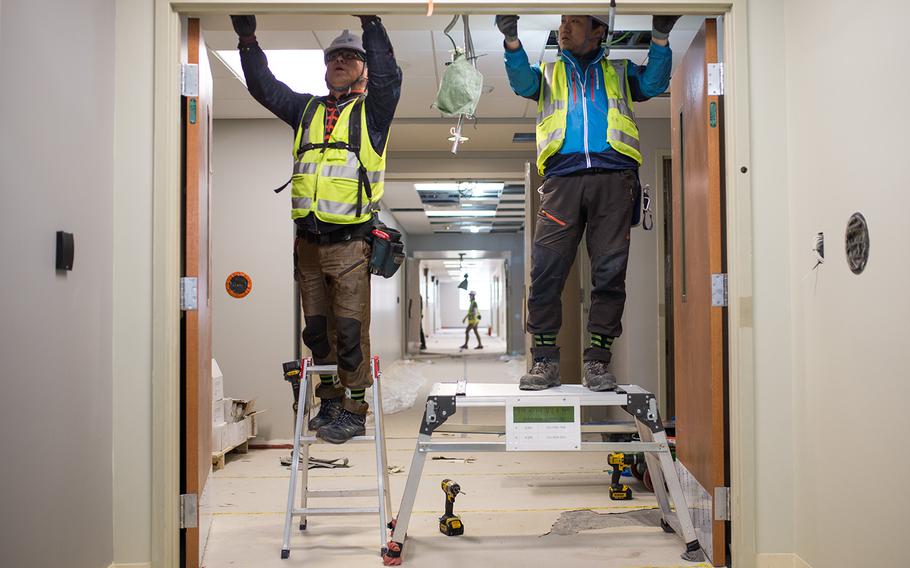 Workers build a doorframe at the hospital under construction at Camp Humphreys, South Korea, Wednesday, April 18, 2018. (Marcus Fichtl/Stars and Stripes) 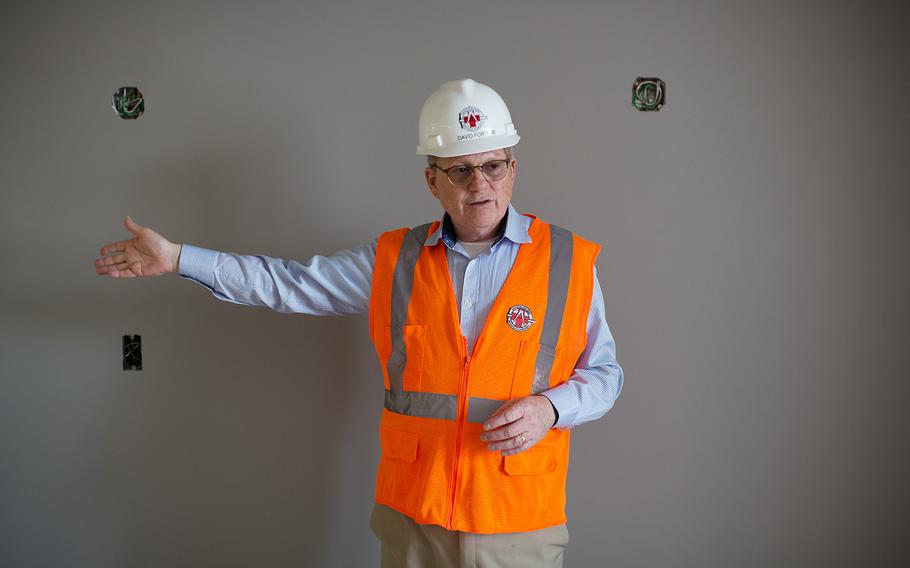 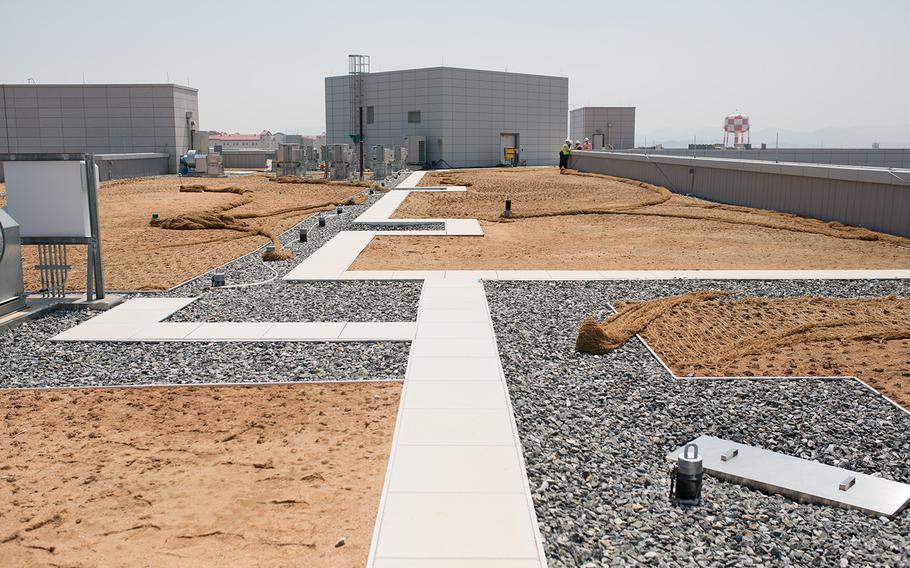 The rooftop of the new hospital under construction at Camp Humphreys, South Korea, is seen on Wednesday, April 18, 2018. (Marcus Fichtl/Stars and Stripes) 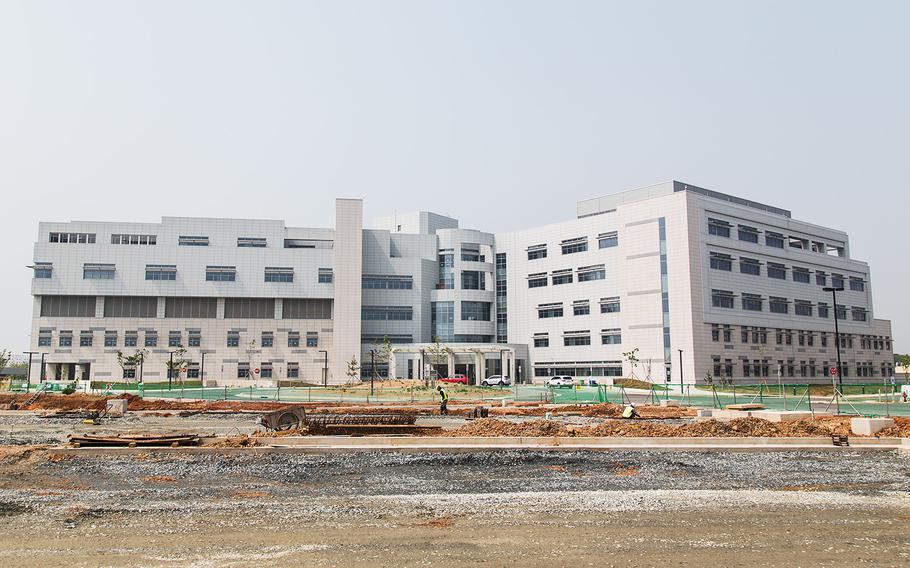 A new hospital under construction at Camp Humphreys, South Korea, is seen on Monday, May 14, 2018. (Marcus Fichtl/Stars and Stripes) 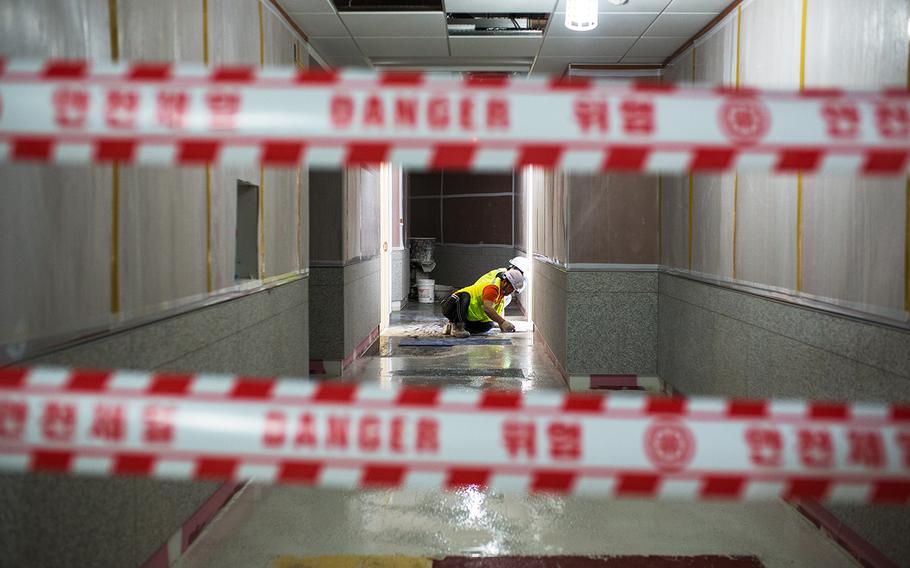 CAMP HUMPHREYS, South Korea — No building epitomizes the problems that have plagued the expansion of this Army garrison south of Seoul more than its new hospital.

The U.S. military broke ground for the Brian Allgood Army Community Hospital and Ambulatory Care Center in November 2012 on land that had been used for helicopter hangars. But numerous quality control issues and delays filled the years that followed, as the South Korean contractor struggled to meet rigid U.S. standards.

The South Korean-funded construction of the five-story, 68-bed complex is slated to be largely finished and accepted by U.S. authorities by the end of June, nearly three years past the original deadline and $67 million over budget.

Americans will then begin furnishing and equipping the facility, which is due to open for patients on Nov. 15, 2019.

That will mark a major milestone in the much-delayed relocation of most U.S. forces south of Seoul since it will allow the hospital at Yongsan Garrison to close and trigger the movement of the last major unit to Humphreys, planners say.

The final product will offer improvements over its namesake at Yongsan, including a room for cesarean sections in the maternity unit, a new MRI, and more comfortable and secure surroundings with improved energy efficiency.

“The truth is, it hasn’t all been rosy, but the truth is, the end state really is world class. It’s on par with anything we’re building anyplace,” said David Fortune, deputy regional program manager for the Army’s health facility planning agency. “It is worth waiting for.”

The hospital at Yongsan will remain open in the meantime, and Humphreys has two new primary care clinics to prevent a vacuum in care, although officials acknowledge that Humphreys’ rapidly growing population will still face inconveniences during the transition.

Pregnant women, for example, must go to Yongsan or a local hospital for delivery, raising safety concerns because of the commute.

Officials have developed a “stork’s nest” program to allow families to stay at Yongsan in the days before the baby is due, with reduced rates at the on-post Dragon Hill Lodge and at four vacant houses near the hospital.

“Then you won’t have to worry about trying to deliver in traffic,” deputy commander for medical services Lt. Col. Jeremy Johnson said last month during a town hall meeting. “By the way, no one has delivered in traffic.”

What went wrong? The United States and South Korea agreed in 2004 to relocate the bulk of the 28,500 U.S. servicemembers, their families and civilian contractors south of the capital.

Seoul provided the labor and funded most of the nearly $11 billion expansion of Humphreys, a former remote outpost in the rural area of Pyeongtaek, 40 miles south of Seoul.

The move was supposed to take place in 2008, but was repeatedly delayed because of construction problems, corruption and political concerns.

In 2015, police linked two South Korean suicides to the Humphreys expansion, including an employee overseeing the hospital’s construction who reportedly hanged himself after being demoted for failing to meet building deadlines.

The relocation has gained momentum since the Eighth Army moved its headquarters last summer, and the base now resembles an American suburb, with a population that has more than doubled to 26,000 and will eventually reach 40,000.

The hospital — known by its acronym, BAACH — will be one of the last major facilities to open.

Fortune pointed to scratches on walls and sharp edges that need to be removed from fixtures in rooms in the behavioral unit, as he walked through a part of the hospital considered finished during a tour last month.

“We still have some things to correct,” he said, adding that the contractor will be responsible for repairs under a two-year warranty that takes effect when the facility is accepted onto the garrison.

Bulldozers worked outside near a drainage pond surrounded by a walking path as workers rush to finish the project by June 30, with the sound of drills and the smell of burnt metal on the lower floors.

The South Korean contractor, Samsung C&T Corp., blames the delay on differences in construction codes and language and cultural issues that “had to be successfully overcome to reach the point we are at today, having completely remediated all of our U.S. partner’s quality concerns and nearing the completion of the hospital construction.”

The hospital has taken so long to build that new U.S. standards and practices for handling hazardous drugs have forced revisions to the design of the six-window pharmacy.

Work will continue on the pharmacy and a biological containment laboratory through the end of the summer, but that is “not expected to impact transition to patient care activities,” Samsung C&T said in responses to questions by the 65th Medical Brigade public affairs office.

The company declined a request by Stars and Stripes for a separate interview.

Turning point The problems of the past are over, Fortune said, with improved communication and stepped-up oversight.

A turning point was a 2015 letter by the Army Corps of Engineers Far East District outlining nine quality issues that were subsequently fixed.

The most significant challenges were the lack of skirting on the roof, and the need to cut out and replace most of the piping because of poor welding craftsmanship, Fortune said.

The Americans had to channel requests and complaints through the South Korean government instead of directly with the contractor. The U.S. also came under criticism for failing to conduct standard inspections.

“No one was blameless,” said Fortune, who started at Humphreys in March 2015 and has been involved with the construction of six other Army hospitals.

The Army Surgeon General’s Office and Congress intervened, and Fortune took the South Koreans to see military hospitals in the United States.

“The U.S. government replaced about 65 percent of the folks that were working with the Corps of Engineers on this project. And the construction contractor replaced all of his key players on the top line of his organization,” Fortune said. “There was a cleaning house and it was more than just personnel. It was also practices.”

The contractor increased its on-site workforce to about 250 employees and began working nearly every day.

“The important point is we’re moving forward now. Patients don’t have to worry,” he said. “The facility is going to be the same level of quality as anything where they would receive care” in the United States.

World-class facility The Yongsan hospital, formerly known as the 121st General Hospital, underwent multimillion-dollar renovations more than a decade ago and was renamed in 2008 in honor of Col. Brian Allgood, a former hospital commander who was killed in Iraq.

The new BAACH, which will support 65,000 beneficiaries and 5,000 patient admissions annually, has been meticulously designed to comply with U.S. standards and to earn the designation “world-class facility,” Fortune said.

It also has an energy efficient green roof, which was one of the first features finished because the contractor is working from the top down.

The fifth floor includes the women and infant care unit, with two delivery rooms and six recovery rooms with remote controls to adjust lighting and temperature.

The location in the older part of Camp Humphreys ensures it’s built on bedrock and puts it near the medevac operation to allow quick transport of trauma patients and others who need treatment elsewhere, Fortune said. The windows are reinforced and soundproof so patients and others can see but not hear the helicopters, he said.

The in-patient behavioral health unit has 14 rooms with furniture bolted to the floors and gym mats doubling as bathroom doors. The high-security ward includes an outdoor patio and has controlled access with video surveillance and interlocking doors.

“Every effort was made to make this a fairly nice space as well. It’s not supposed to be antiseptic,” Fortune said.

South Korea’s cost for the BAACH construction is expected to be about $224 million – 40 percent more than the original estimate of $157 million, Fortune said. The U.S. will pay about $50 million to furnish and equip the facility.

Fortune stressed that the finished facility will comply with all U.S. standards, including a 120-volt electrical system with hospital-grade receptacles and emergency power systems.

It also has room for growth.

“We expect to operate this building for 50 years and we can’t project what kind of medical equipment will go into this facility even 10 years down the road,” he said.

Scott Lawrence, project manager with U.S.-based BTF Solutions, which is handling the outfitting phase, said most of the 18,000 pieces of equipment will be new. Only about 4 percent of equipment from Yongsan will be eligible for reuse.

“It’ll be fully equipped by the end of September 2019,” he said. “Then we’ll start our transition process … so that we can hit the opening date of early to mid-November 2019.”