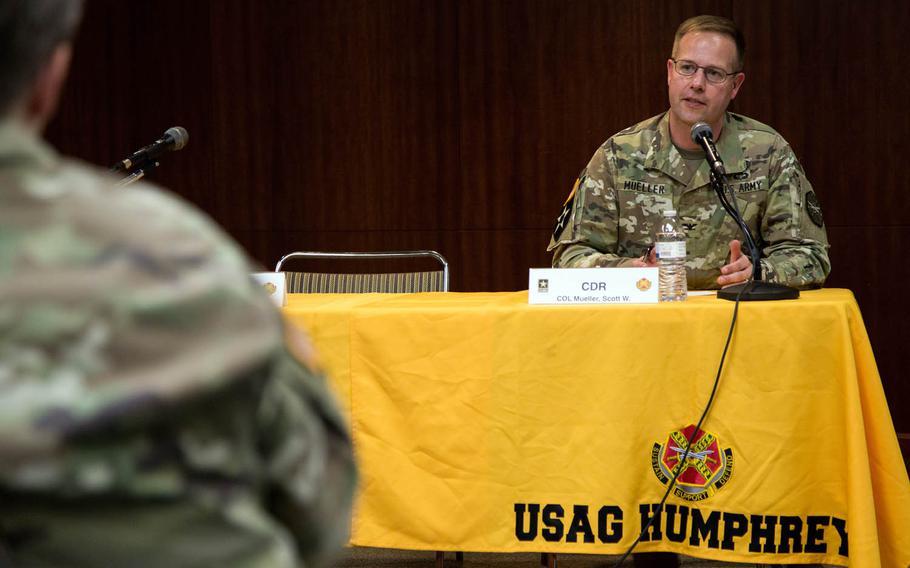 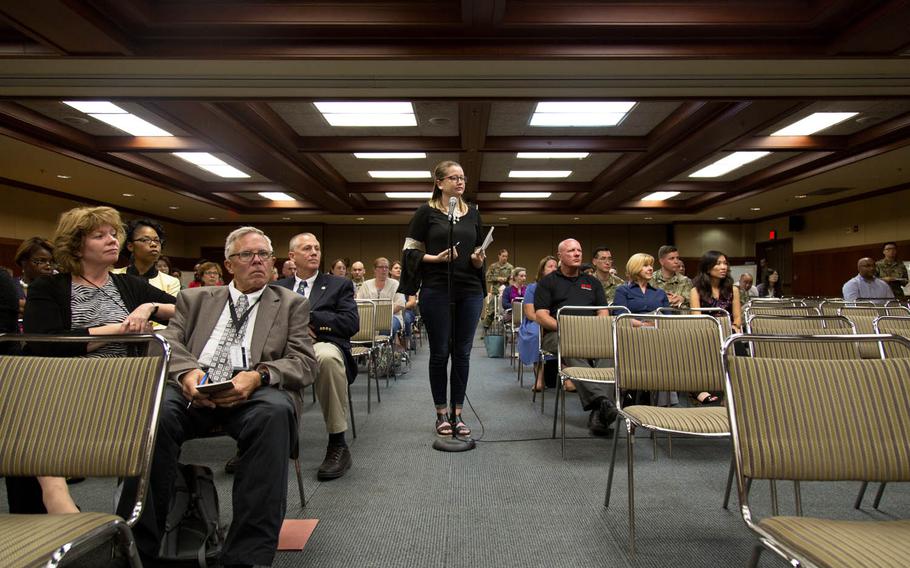 Buy Photo
A resident of Camp Humphreys, South Korea, asks a question about the passport office during a town hall meeting at the base, Thursday, Sept. 7, 2017. (Marcus Fichtl/Stars and Stripes) 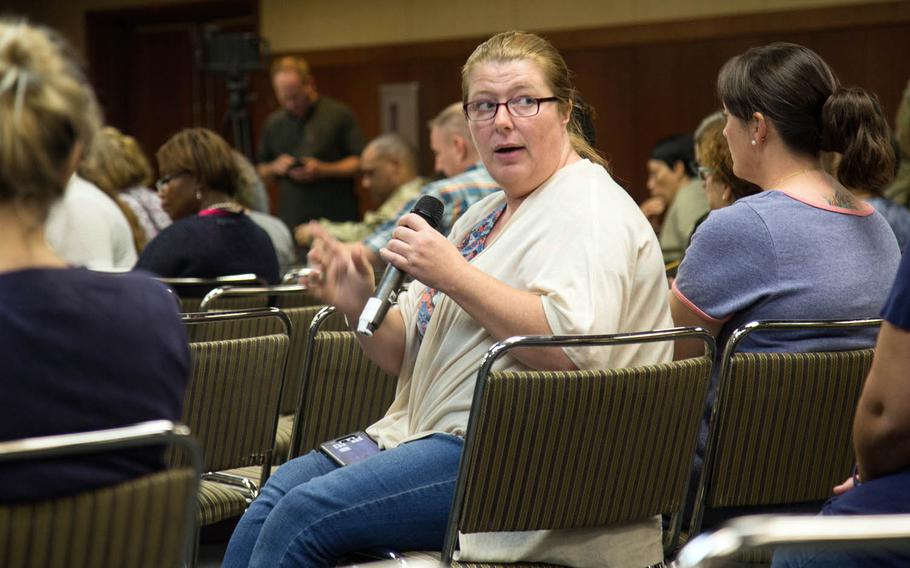 CAMP HUMPHREYS, South Korea — Camp Humphreys had good news and bad news for its growing population as it announced plans to open several new facilities. A larger post exchange will open in November, but the troubled hospital won’t be ready for patients until the end of 2019 at the earliest.

The timelines were presented as attendees at a town hall meeting Thursday voiced frustration about overcrowding and problems with services on the expanded Army garrison, which is the focus of a much-delayed relocation of the bulk of U.S. forces south from Seoul and surrounding areas.

Officials said they were struggling with contractor and funding issues and were doing their best to balance the need to maintain military readiness against the threat from North Korea with comfortable accommodations for servicemembers and their families.

“Bear with us,” said Col. Scott Mueller, Humphreys’ commander. “We’re growing, and we’re trying to make this as painless as we can.”

Mueller, who assumed command in June, said the new PX would have its grand opening on Nov. 20 “just in time for the holiday season.” He added its accompanying food court will open a few weeks prior on Oct. 30.

Deputy commander for medical services Lt. Col. Jeremy Johnson told the crowd the first day for patients at the new hospital will be in December 2019, although he later elaborated to Stars and Stripes the date is based on current projections and may change.

Mueller blamed the delays on quality control issues, noting the contractor has doubled its work force to complete the facility according to American standards. Meanwhile, the main hospital on Yongsan Garrison in Seoul will remain open and residents have access to South Korean hospitals in the local community, he said.

Officials also said the new library, an 18-hole golf course and two gas stations will open next year. They cited a delay in the installation of anti-vehicle barriers for why some of the new gates weren’t open yet.

Education officials also said 200 more students than anticipated had registered for the current school year, raising the student population to 1,200, and they were working on getting more teachers and resources to accommodate them.

Much of the reason for the outgrowing of amenities comes from the massive growth at Humphreys as part of a 2004 agreement to transform what was a small military outpost into a megabase that will eventually be the new headquarters for U.S. Forces Korea.

The $10.7 billion expansion project, which is mainly funded by the South Korean government, has been plagued by construction problems and quality concerns that forced some buildings to be torn down and rebuilt.

The relocation was originally set to take place in 2008, then 2012 and 2016 before gaining momentum this year. The population has grown to 25,000 with the recent relocation of the 8th Army Headquarters from Yongsan and will eventually reach more than 40,000, officials said.

Many residents in the audience and watching the town hall streamed live on Facebook complained about a lack of selection and space at the commissary, which was designed for 9,000 people.

Officials gave no clear answer on when the new and larger commissary will be open, but said employees at the current facility are working hard to keep shelves stocked and more options are available at the commissaries at nearby Osan Air Base as well as Yongsan.

Some of the biggest complaints were about the gym, where people requested expanded hours of operation.

Mueller stressed hours are limited by funding, but promised to look into the issue. He said installation management command doesn’t take into account unique characteristics like South Korean soldiers being able to use the facility, so more money was being requested.

A lack of shuttle transportation was also a concern on the post where most soldiers are not allowed a vehicle and families are limited to one.

Officials said military regulations have prevented them from directly servicing certain locations and getting soldiers to work is a priority, but solutions are in progress, including a possible bus that would charge a fare.

Mueller told the crowd he shared many of their frustrations in the delays, but most of the construction is run and funded by the South Korean government and he has little say on the projects.

“I want the new library to open; I want the access points open,” Mueller said. “We are working with 8th Army, USFK and the FED – the engineers – to get these things going and to pressure these contractors to get things done.”

Mueller urged residents to continue to voice their concerns and suggestions via the interactive customer evaluation program, or ICE, and promised to respond if contact information is provided.

Another town hall meeting specifically about the base transition also will be hosted by 8th Army commander Lt. Gen. Thomas Vandal next month.