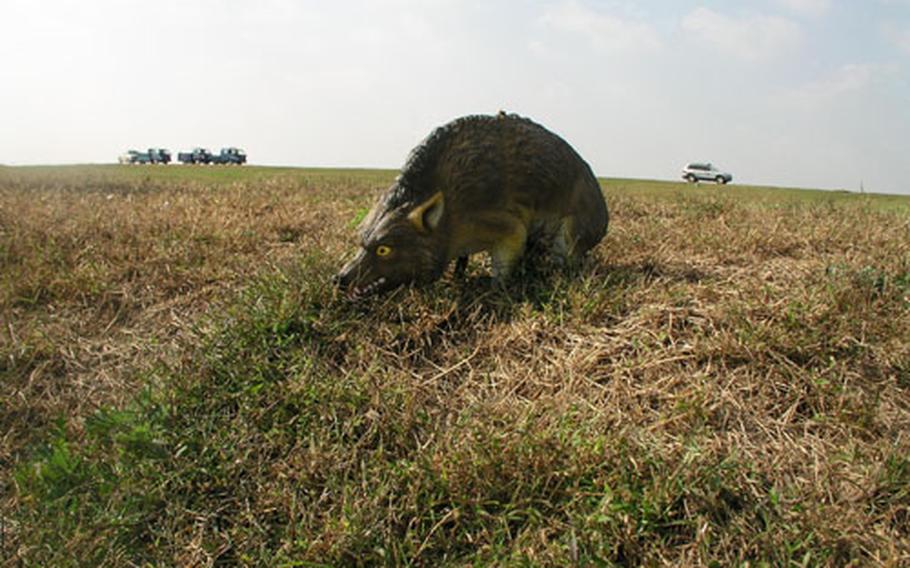 At Camp Humphreys in South Korea, safety officials at Desiderio Army Airfield make use of plastic coyote decoys like this one in an effort to scare off ducks and other birds that are drawn to the airfield’s several ponds, posing a hazard to air traffic. (Franklin Fisher / S&S)

At Camp Humphreys in South Korea, safety officials at Desiderio Army Airfield make use of plastic coyote decoys like this one in an effort to scare off ducks and other birds that are drawn to the airfield’s several ponds, posing a hazard to air traffic. (Franklin Fisher / S&S) At Camp Humphreys in South Korea, safety officials at Desiderio Army Airfield maintain portable propane “bird cannons” at points along the flightline and elsewhere to scare off the pheasants, ducks, deer, stray dogs and other creatures that pose hazard to air traffic. Desiderio is the U.S. Army’s busiest overseas airfield. When the control tower activates a cannon, its arm begins rotating and fires loud blasts not unlike those of a shotgun while its loudspeaker blares a 90-second recording of shrill predatory animal sounds. (Franklin Fisher / S&S)

CAMP HUMPHREYS, South Korea &#8212; Al Stilley&#8217;s got nothing against the ducks and other wildlife that nature brings in season to the ponds and grasses of Camp Humphreys in South Korea.

But because those creatures &#8212; everything from ducks and doves to deer and dogs &#8212; can make their way onto the post&#8217;s Desiderio Army Airfield, Stilley, a retired Apache helicopter pilot and safety officer there, has to deploy a shrewd arsenal of &#8220;animal mitigation&#8221; tricks to scare them off.

Airfield officials don&#8217;t want the creatures getting in the way of the aircraft that loom in and out of Desiderio, the U.S. Army&#8217;s busiest overseas airfield. Helicopters and prop-driven fixed-wing aircraft fly out of Humphreys.

But so do many birds: white egrets, pheasants, ducks, doves and blue-white-and-black magpies. And then there are the four-legged creatures: Korean water deer, stray dogs and cats, and an animal called the &#8220;raccoon dog.&#8221; In Japan it&#8217;s known as the tanuki.

Officials are now gearing up for the ducks that start showing up in the late fall. They bask and otherwise loiter at the airfield&#8217;s drainage culvert and three ponds.

Stilley and staff will use the same ploys on the ducks that they use to fake out most of the other animals year-round.

Their favorite is the portable propane &#8220;bird cannon&#8221; equipped with a loudspeaker that blares a 90-second audiotape of shrill, menacing predatory animal and hunting sounds. It&#8217;s mainly a metal tube mounted on a gray metal box. When the control tower activates the machine by remote control, the tube starts rotating slowly in a full circle and fires intermittent loud blasts of air.

&#8220;What we found works best is when an aircraft is three minutes away from landing, he&#8217;ll call the tower; tower will initiate; the bird cannon starts firing&#8230;.the birds fly away, the aircraft lands without any problems,&#8221; he said.

Stilley also uses six life-size brown plastic coyotes&#8211; fierce-eyed decoys molded in a predatory crouch, as if ready to go for the jugular of the nearest duck or deer.

And he&#8217;s got four canvas and plastic owls that can be mounted on sticks and whose four-foot wingspans flap in the wind. He also uses lengths of shimmering metallic tape that birds shy away from and an environmentally safe bird repellent that&#8217;s spread on the grass about every three months.

Workers check the traps daily and any catches are turned over to Pyeongtaek City animal control officials, who free them elsewhere. Camp Humphreys is in Pyeongtaek, about an hour&#8217;s drive south of Seoul.

But in coming weeks the main effort will be against ducks. Late next month Stilley will move three cannon from the runway to the two ponds closest by.

Fully 99 percent of the bird strikes have involved fixed-wing aircraft. Helicopters have the ability to hover and move around more, Stilley said.

Getting aggressive with pheasants

&#8220;In the dead of winter when the temperatures are extremely cold, the doves will hug onto the runway,&#8221; he said.

So safety officials have to make a special effort to roust the doves just before a plane takes off. They&#8217;ll drive a vehicle down the runway with the plane taxiing behind them, then they stop near the doves.

When the birds have flown, the aircraft can proceed with takeoff.

But the pheasants are in a category by themselves.

&#8220;It&#8217;s strange because all the other birds, the egrets, the magpies, the ducks, are fast enough to get away as the aircraft comes down the runway, all that noise,&#8221; said Stilley.

So from here out the pheasants have a date with death.