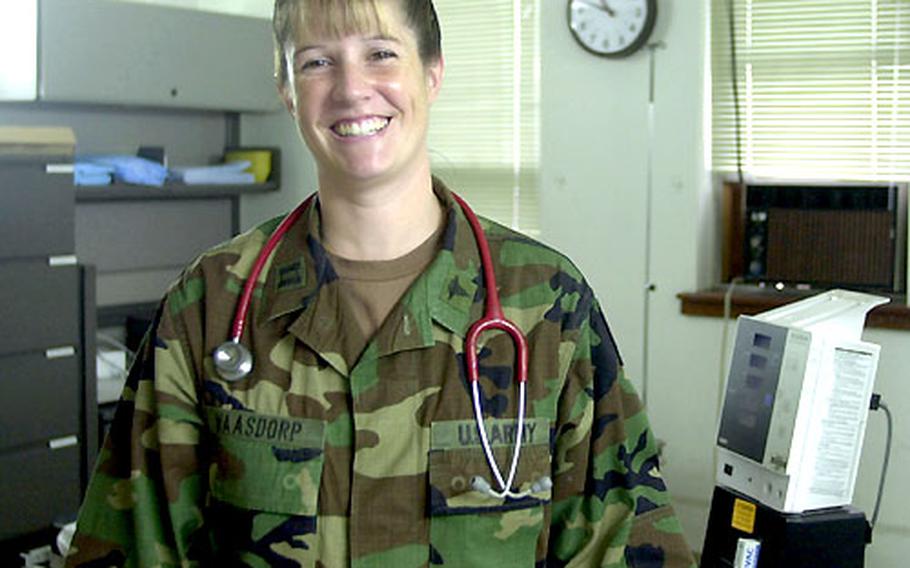 But military medical officials decided it was time to have a permanent pediatric presence south of Seoul.

With a small but growing population of children &#8212; and the possibility that hundreds more families will move south in a reorganization of U.S. forces on the peninsula &#8212; the timing seemed right, officials said.

&#8220;Nobody here had pediatric training and most of the doctors are flight surgeons. So if children were brought in, they would assess them, see if they could help, then send them up to Seoul,&#8221; Waasdorp said while sitting in her office in the drab, concrete clinic. &#8220;It was really a burden on the families.&#8221;

Waasdrop said Area III has 300-600 pediatric patients, about half of whom are children of active-duty servicemembers.

Appointments at the new pediatric clinic already are booked weeks in advance, but Waasdorp says she should be able to handle the caseload. Generally, one full-time pediatrician can handle 600-1,000 patients.

With the slated influx of several new commands from other area installations, the pediatric clinic is one among several Camp Humphreys changes.

And next month, work should be completed on an on-base, 52-unit housing tower, Humphreys spokeswoman Susan Barkley said.

By 2011, the military hopes to close camps Long and Eagle, and add to the population at Humphreys.

&#8220;The biggest challenges are going to be training the medics and the nurses, who aren&#8217;t used to treating young patients or assessing their health &#8230; and getting the word out that the clinic is here,&#8221; Waasdorp said.

Another challenge is one common to military medical facilities, especially in South Korea:

With the high turnover of both medical personnel and patients, it&#8217;s hard to develop a patient-doctor relationship.