Soldiers of Army&#39;s 176th Finance Battalion at work in a newly-renovated building on Camp Humphreys in South Korea. Base officials will use the three-story former barracks to house a one-stop in- and out-processing center for troops, and for other key "quality-of-life" services that soldiers need. (Courtesy of U.S. Army)

Soldiers of Army&#39;s 176th Finance Battalion at work in a newly-renovated building on Camp Humphreys in South Korea. Base officials will use the three-story former barracks to house a one-stop in- and out-processing center for troops, and for other key "quality-of-life" services that soldiers need. (Courtesy of U.S. Army) 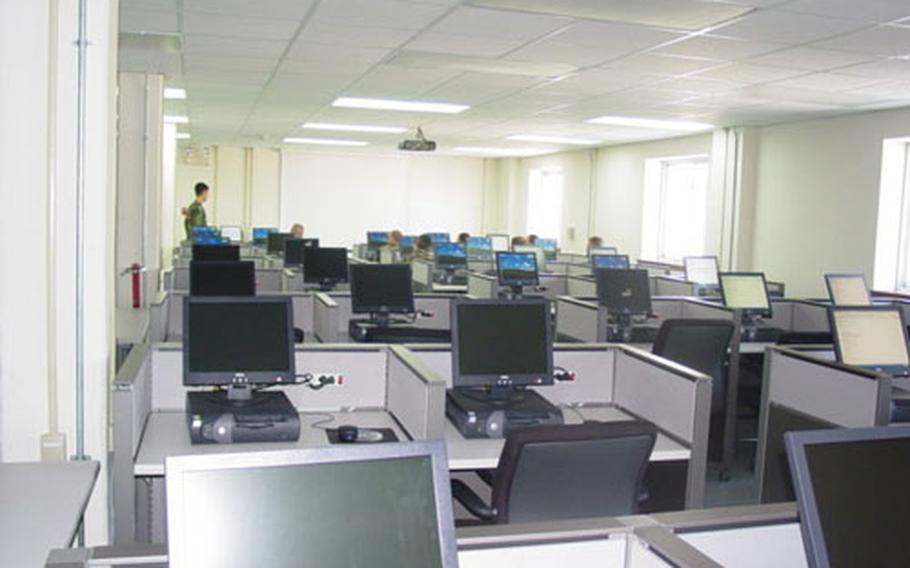 The new "one-stop" in- and out-processing center inside a newly renovated building at Camp Humphreys in South Korea. The center is equipped with 35 computer work stations. (Courtesy of U.S. Army)

The U.S. Army at Camp Humphreys is making life easier for soldiers processing in or out of an assignment at the big helicopter base. Instead of troops having to visit a dozen or more agencies around base, the base brings the agencies to them.

Camp Humphreys has opened what it calls a &#8220;one-stop&#8221; in- and out-processing center, in a newly renovated one-time barracks, centrally located in the base&#8217;s bustling downtown section.

During the one day soldiers spend at the &#8220;one stop,&#8221; a succession of briefers from a dozen on-base agencies present needed information and walk them through required paperwork.

The center, which opened Sept. 1, can process up to 35 troops a day and is rigged with computer workstations troops can use. Soon, troops out-processing at the end of a tour also will sail through a streamlined process, Gordon said.

Under the old way, out-processing soldiers had to visit myriad offices and get their paperwork stamped to show they&#8217;d stopped in &#8212; regardless of whether they&#8217;d ever had dealings with those agencies, Gordon said.

For in-processing troops, the &#8220;one stop&#8221; day starts at 8:30 a.m. and ends at 4:30 p.m. Representatives on hand include those from the base medical and dental clinics, Army Community Services, education center and the offices of personnel, finance, transportation, driver&#8217;s testing and base housing.

The center is on the first floor of Building S-544, a three-story structure that&#8217;s been under renovation since March. Workers gave the building a stem-to-stern, $388,000 overhaul, said Wayne Tharrington, chief of construction inspection at the Area III public works department.

They first gutted the structure, then put in new ceilings, floor, walls, windows and doors and upgraded the electrical system, equipping the building for computer use. They also added a big parking lot in the back, Tharrington said.

Base officials want the new building to serve as a central spot not only for processing but for other &#8220;quality of life&#8221; services troops often need in their first several weeks at a new duty station, said Susan Barkley, public affairs chief for the Area III Support Activity at Camp Humphreys.

&#8220;The renovation was designed to incorporate the one-stop concept,&#8221; Barkley said. The building also houses commercial phone and Internet services, a re-enlistment office, finance, pass and ID, and other offices, officials said.

&#8220;And I believe there are plans in the future to look to relocate even more things that the soldier would need to either know about or be able to touch soon after their arrival in Area III,&#8221; Barkley said.