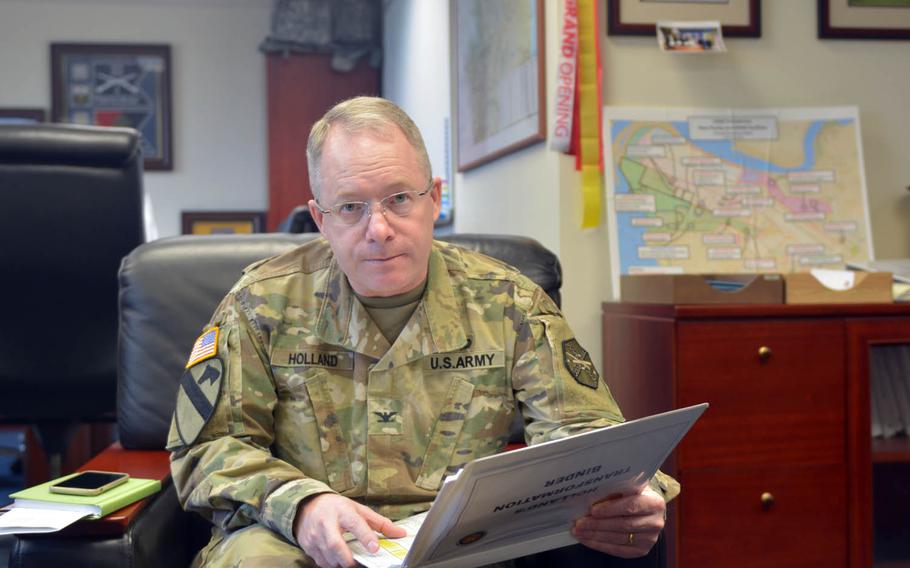 CAMP HUMPHREYS, South Korea — The Trump administration's hiring freeze has left key jobs vacant and could jeopardize readiness at this U.S. base, the commander said Wednesday.

“The hiring freeze that we’re under right now … is having a big impact on us in Korea writ large,” Col. Joseph Holland, commander of U.S. Army Garrison Humphreys, said in an interview in his office.

Holland said it was helpful that the base was able to recruit and fill critical positions up to eight months ahead of the incumbent employee’s departure in a bid to soften the blow.

But he said many positions, including important support roles for soldiers and their families, remained vulnerable because of bureaucratic delays and confusion.

“Even though we’ve seen it codified from the Department of Defense that ‘you should be able to do this,’ the orders have not yet filtered down to be able to affect that direction that we’re seeing at the strategic level,” he told Stars and Stripes.

“I think there are a lot of people who are very timid about not allowing us the latitude to do things at the tactical level,” he added.

Camp Humphreys is in the midst of a long-delayed expansion to make it the U.S. military’s new flagship installation on the divided peninsula, as the bulk of forces here are due to relocate south of Seoul over the next two years.

Holland said officials are trying to keep things running smoothly by diverting soldiers and civilian employees to fill in the gaps.

“We’re mitigating it right now, but if we’ve got to continue this for another 60 to 90 days — especially with the amount of soldiers that are coming here — we’re going to have to get help from people coming from the states,” he said. “That’s just going to cost a lot of money.”

While uniformed servicemembers are exempt, Holland said a long-term impact on community services could prove distracting to soldiers as they have to worry more about their families and other issues.

“So, yes, there is a direct correlation to an impact on readiness if this goes on for much longer,” he said.

The hiring freeze, which is to remain in place for three months, was one of Trump’s first actions as president. The executive order calls for the Office of Personnel Management and the Office of Management and Budget to develop and implement a long-term plan to shrink the federal workforce.

There was initial confusion over whether the military personnel excluded would include some 755,000 DOD civilian employees.

The Pentagon specified earlier this month that it will exempt 16 categories of civilian jobs with direct national-security and public-safety responsibilities from the hiring freeze.

It also said additional positions can be exempted if officials can demonstrate “compelling reasons” to do so.

As garrison commander, Holland has overseen the U.S. military’s largest construction project since the Panama Canal for nearly two years.

He pointed out that many units already have transferred to the base, 55 miles south of the capital, making it increasingly important to strengthen support.

For example, the air field, which is active around-the-clock, is relying on an acting manager because officials were unable to push through a final offer to fill the role on a permanent basis before the Feb. 22 cutoff date, Holland said.

“We have a final offer given to a gentleman coming from the United States, but he can’t come here because of the hiring freeze. He fell outside of the window,” he added.

Holland said other vacancies stranded by the hiring freeze included directors for the Army’s substance-abuse program and the community service program, as well as the garrison sexual-assault response coordinator and victim advocate.

“We are especially vulnerable when it comes to supporting the soldiers and the community in those areas,” he said.