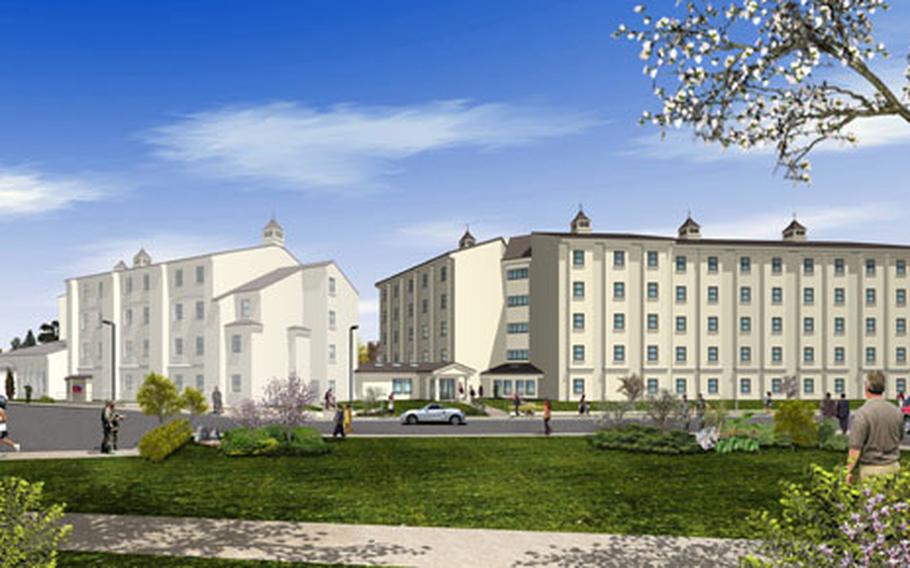 An artist’s rendering shows the Camp Humphreys’ Army Lodge with a new wing to open in January 2008. Groundbreaking for the $12.6 million project was Tuesday. (Courtesy of U.S. Army)

PYEONGTAEK, South Korea &#8212; Camp Humphreys&#8217; Army Lodge will almost double in size once workers finish building a new wing that is expected to open in January 2008.

Work was to start this week on the structure, which will bring to 156 the lodge&#8217;s total number of rooms, they said.

Officials kicked off the $12.6 million project Tuesday morning with a groundbreaking ceremony at the construction site, about 50 yards from the existing lodge, in Camp Humphreys&#8217; commercial heart near the Community Activities Center.

A covered walkway will connect the buildings, he said.

Daily rates at the lodge now are $52 for a standard room; suites are $56 and $58. No decision had been made yet on room rates in the new building, Gennaccaro said.

Yojin Industrial Company Ltd. of Seoul will carry out the work under contract with the U.S. Army Corps of Engineers. Designer for the project is Thomas J. Davis/Jung-Il Associated, Architects, Engineers, Planners.

Under a U.S.-South Korean agreement, Camp Humphreys is to triple in size by 2008 and become the U.S. military&#8217;s main installation on the peninsula. The post&#8217;s population also will increase, including its number of officially sponsored military families, officials have said.

&#8220;And we&#8217;ll be able to accommodate them and the children in these suites, as opposed to them having to struggle in one room with maybe connecting doors but no cooking facility,&#8221; Gennaccaro said.

The new lodging also will help accommodate other guests, including groups such as the one at an official conference at Camp Humphreys this week, he said. The lodge had room for about 90 of the group but another 45 were referred to off-post hotels, he said.