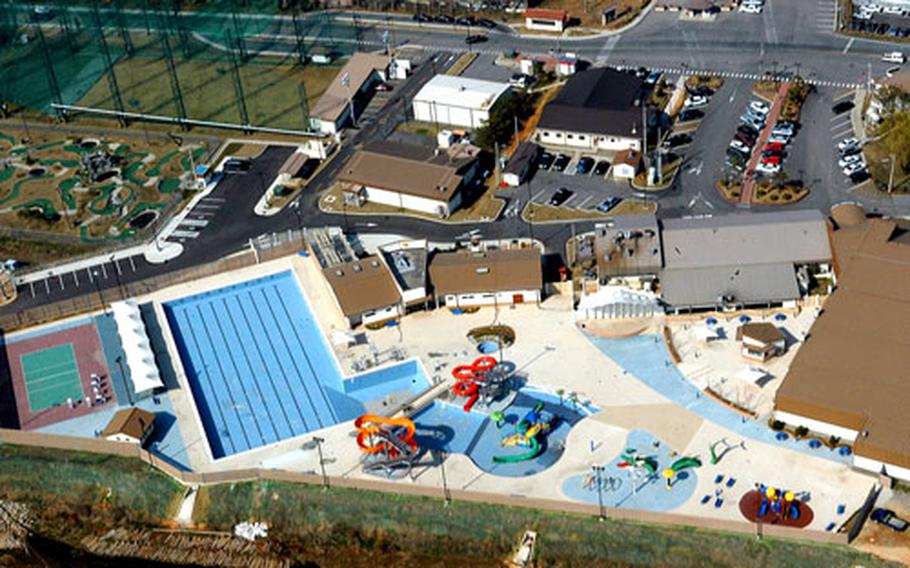 The Family Aquatic Center at Camp Humphreys opens Thursday, just in time for the Memorial Day weekend, the traditional start of summer.

The $7 million center affords community members of all ranks and ages not only a chance at fresh air and sunshine but access to several pools, a hot tub that seats 10, a sports area and a snack bar.

The main pool is Olympic-sized, and there&#8217;s also a diving pool with two one-meter diving boards and one three-meter board.

Along with those is a &#8220;splash pool&#8221; with tube slides and a separate water play area with a slide and a children&#8217;s play area with shallow water and a large serpent figure spewing water for kids to play in.

In addition, there&#8217;s a dry playground area with a volleyball court. Both have resilient surfacing to help prevent injuries.

The snack bar will offer beverages and snacks, including hot dogs, hamburgers and pizza, said Mike Ross, chief of community operations for the directorate of community activities at U.S. Army Garrison Humphreys.

&#8220;On alternating Saturday nights we&#8217;ll do either baby back ribs, fish fries or steaks,&#8221; said Ross. The on-post Alaska Mining Company restaurant will provide the food service, he said.

Last summer, officials opened one portion of the park so community members could use the main pool and the diving well. About 250 turned out daily, Ross said.

Get your feet wet

Some of the features offered at the Family Aquatic Center:

Dry off and go looking for food and entertainment: