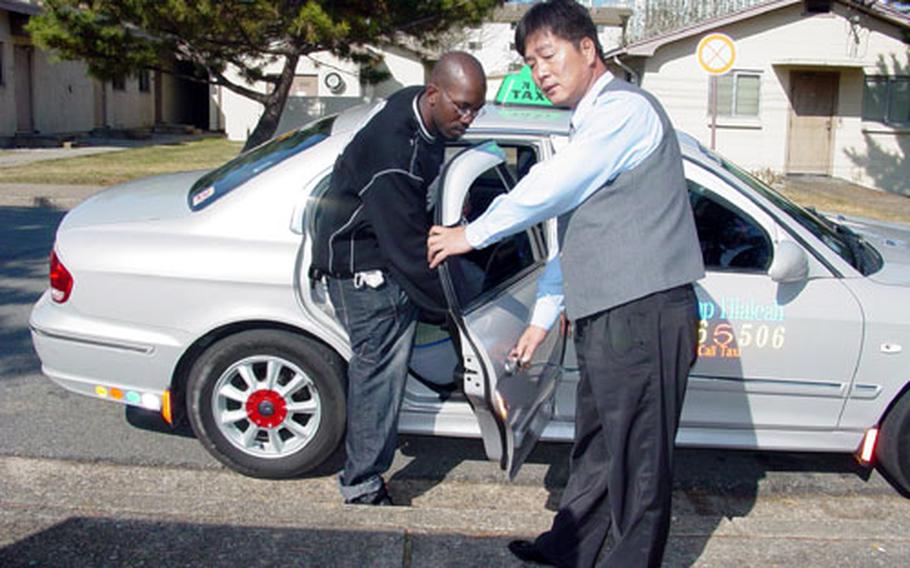 A taxi driver holds the door for a passenger at Camp Hialeah in Busan, South Korea, in November, 2003. Hialeah officials scrapped the service in July after patrons found it tough to find a cab. (Pak To-yong / Courtesy of U.S. Army)

PYEONGTAEK, South Korea &#8212; Visitors staying at Army lodging at Camp Hialeah in Busan these days better be ready to lug their baggage a few blocks to get to their rooms.

With the installation set to close next summer and its population growing steadily smaller, Camp Hialeah officials have no plans to set up a new taxi service. So Defense Department employees or others who may travel there on temporary duty will have to get around by some way other than taxi.

Hialeah introduced a taxi service in November 2003. The post commander scrapped it last July because the drivers allegedly weren&#8217;t meeting the terms of their written agreement with the installation, Jackson said.

Under an arrangement between the drivers and the installation, seven taxis were working the base, but were free to also seek passengers anywhere else in Busan.

Camp Hialeah patrons could phone for one of the taxis or seek one at any of three taxi stands on base.

But the cabs had grown increasingly scarce.

&#8220;So they asked the drivers about the lack of service and they indicated that they didn&#8217;t want to come to the base because of insufficient revenue,&#8221; Jackson said.

&#8220;Apparently, the customer base has been dwindling on Camp Hialeah over the past year or so and we expect it to continue to dwindle as Camp Hialeah approaches closure.&#8221;