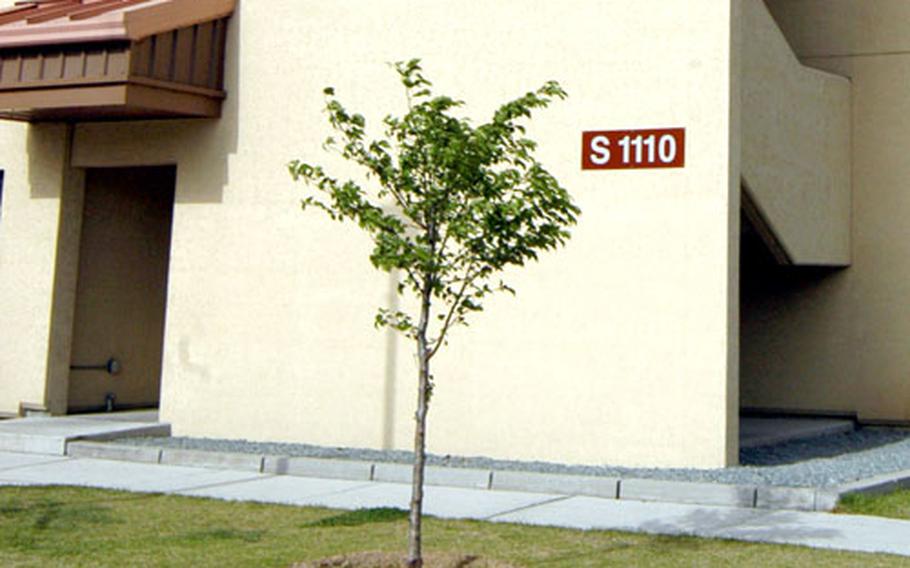 One of the six young cherry blossom trees the Army took from Camp Hialeah in Busan and re-planted at Camp Henry. Camp Hialeah is slated to close later this year. (Kevin Jackson / U.S. Army)

PYEONGTAEK, South Korea &#8212; It was only two weeks after the Japanese surrender ended World War II that the first U.S. soldiers came through the gates of a Japanese military installation in Busan, South Korea.

The installation had a horse-racing track that had been a big source of entertainment for the Japanese military. With typical American humor, the Army renamed the post Camp Hialeah, for the famous Hialeah racetrack in Florida. To this day at Camp Hialeah, a street built on the former racecourse is named Race Track.

By this August, the U.S. military will have moved out of Hialeah permanently and turned it over to the South Korean authorities under an agreement between the two nations.

But to preserve the memory of Hialeah and its six decades as a U.S. military post in South Korea, the Army has transplanted six of its cherry blossom trees to Camp Henry in Daegu.

&#8220;Camp Hialeah will be closing after U.S. involvement there for 60 years,&#8221; said Kevin Jackson, chief spokesman for the Area IV Support Activity at Camp Henry. &#8220;And while that chapter will come to a close for us, we wanted to ensure that a part of Camp Hialeah would live on into the future.&#8221;

The Army trucked the trees from Hialeah to Henry on April 4. The next day, it replanted them in an event that saw the participation of American and South Korean Boy and Girl Scouts and Army and Daegu City officials.

They replanted the trees outside Building S1110, a barracks, one on each side and four along the front, Jackson said.

Each tree is about 6 to 8 feet tall. They bring to probably two dozen the number of cherry blossom trees at Camp Henry, a 51-acre post in southern Daegu.

And it was a fun-fest for the Scouts, who threw themselves into the task of replanting five of the trees, Jackson said. Officials replanted the other one.