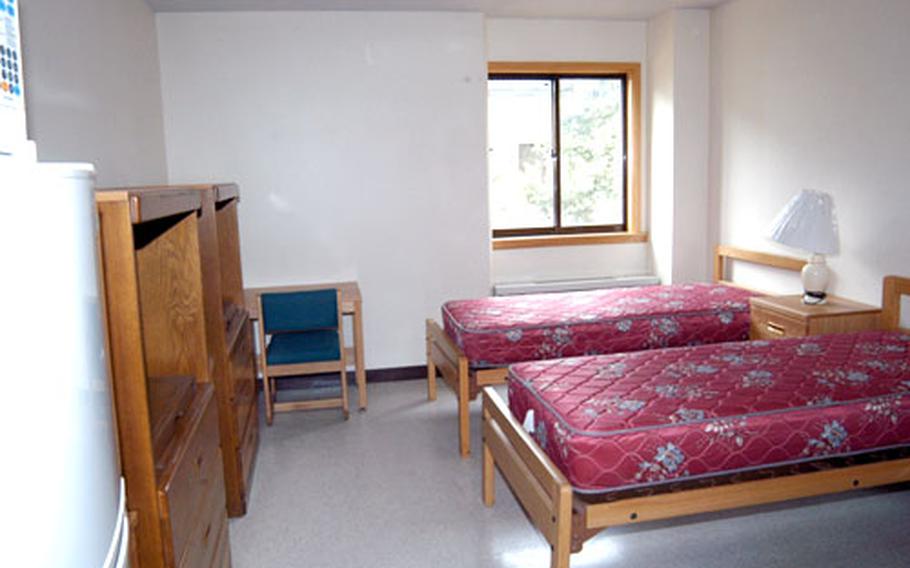 PYONGTAEK, South Korea &#8212; When Pfc. Christina Thompson moves into a new barracks at Camp Henry in Taegu, South Korea, next week, you may find her spending a lot of time in the kitchen.

The new $6.9 million, four-story structure, Building 1110, will house 216 troops, all E-6 or below, in 116 rooms. Occupants who are E-4 and below will live two-to-a-room; noncommissioned officers E-5 and E-6 get single rooms, said James Hamilton, Taegu public works chief for the Area Four Support Activity at Camp Henry.

Camp Henry has six other barracks, all two-story structures dating to 1979.

The new building will be equipped with about $500,000 of new furniture, Hamilton said.

All rooms have a refrigerator, microwave oven and bathroom, he said. Each occupant gets a desk, and each is assigned storage-room space.

His unit is set to sign for furniture Friday.

Besides those from his detachment, troops from seven other units are slated to move in.

In addition to its second-floor kitchen, the new barracks has a third-floor day room and a fourth-floor game room.

On the first floor is a &#8220;mud room&#8221; where troops can clean boots and gear. A laundry room on the same floor has washers, dryers and built-in ironing boards.

She and other soldiers got a tour of the rooms at the new barracks recently. The new rooms are somewhat smaller than their current ones, she said, but she&#8217;s still glad to be moving.

Construction began in February 2003 and was completed in October, said Hamilton. The Shin Il Engineering Co. Ltd. did the work under contract with the U.S. Army Corps of Engineers.

Hubble said that as a unit commander, he welcomes the new building, in part because it&#8217;ll mean greater convenience and safety for his troops.