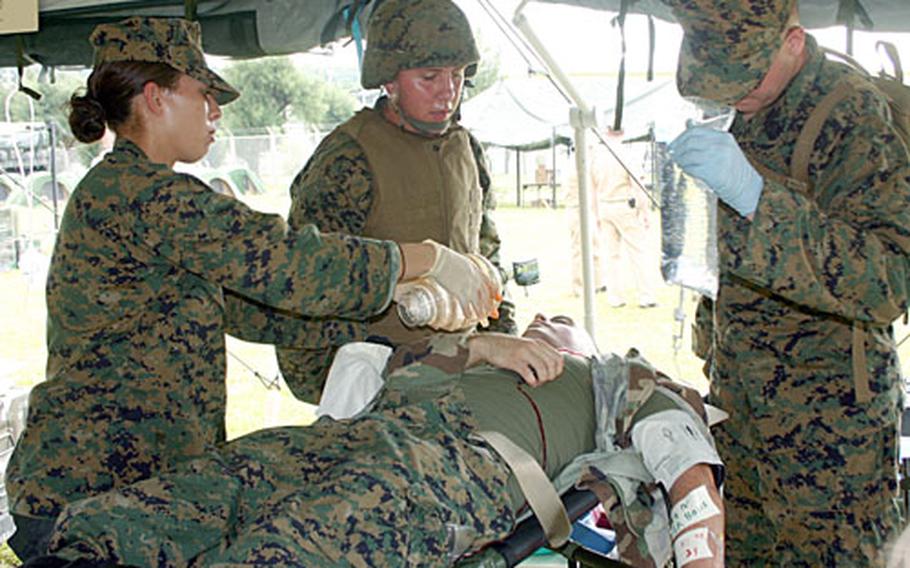 Third Medical Battalion personnel prepare to move a simulated patient from the triage tent to the surgical tent of the forward surgical support system set up on Camp Lester on Thursday for a mass-casualty exercise. (Cindy Fisher / S&S)

Third Medical Battalion personnel prepare to move a simulated patient from the triage tent to the surgical tent of the forward surgical support system set up on Camp Lester on Thursday for a mass-casualty exercise. (Cindy Fisher / S&S) 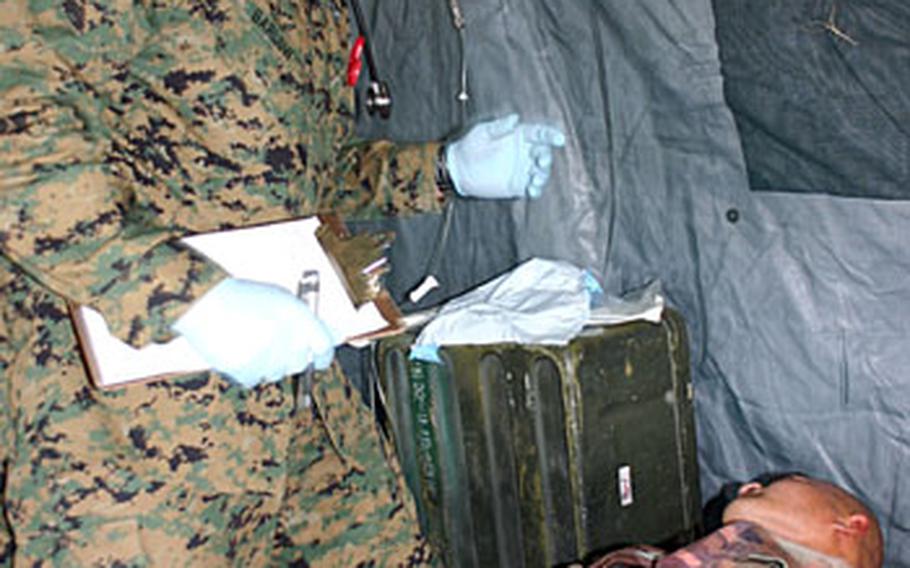 That&#8217;s the most critical time for wounded Marines &#8212; the first hour after being injured in combat. And the Camp Hansen-based 3rd Medical Battalion trained to ensure every second of that hour counts, a battalion leader said Thursday.

Since Monday, battalion corpsmen established and moved a forward surgical support system to two different locations on Camp Hansen. They then tore it down and set up for a final time Thursday on Camp Lester for a mass casualty drill.

Moving from one location to another quickly is an essential part of the training, honing the skills the corpsmen would need in combat, said Lt. Dean Goad, the officer in charge of the training.

The forward surgical support system is a vital link between care provided by corpsmen or buddies when a Marine is wounded in combat and transportation to a more established hospital, Goad said.

This is where doctors and corpsmen practice &#8220;stabilizing surgery, patching folks up so you can fly them somewhere else, or possibly sending them back to their unit,&#8221; he said. &#8220;If these guys deployed, this is what they would be doing.&#8221;

The system is broken down into a triage area, an area for pre- and post-operative care and surgery, and a &#8220;ward&#8221; tent where patients wait for a surgery table to become available and return after surgery while waiting for transport to a more established hospital.

During the four days of training, corpsmen and doctors got a feel for how to quickly assemble the tents, set up medical stations, handle patient-laden litters and establish patient flow.

Lt. Cmdr. Jason Schrager, a doctor with the battalion, said he was impressed with the capabilities found within the mobile surgery.

But a veteran of action in Iraq, Seaman Cleon Harris, said while it was great training, &#8220;nothing will prepare you for the real thing.&#8221;

Harris, who had worked in a similar medical environment, with the exception that it was a hardened facility and not tents, said this week&#8217;s training was a &#8220;good start.&#8221;