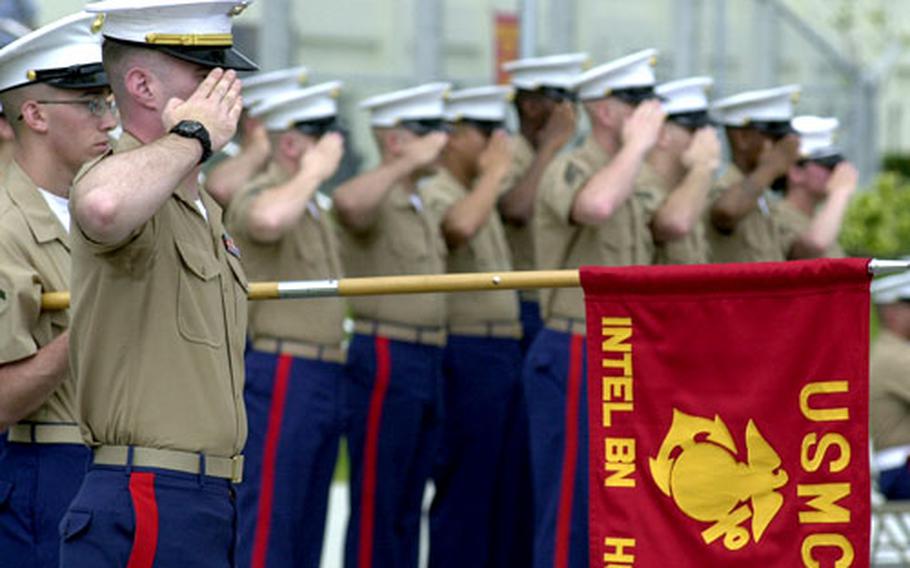 Marines from 3rd Intelligence Battalion salute in formation during a building dedication Friday on Camp Hansen. The unit’s newest building, “Courtney Hall,” was dedicated to the only Marine from the battalion to be killed in Iraq — Sgt. Kelley L. Courtney. (Fred Zimmerman / S&S)

Marines from 3rd Intelligence Battalion salute in formation during a building dedication Friday on Camp Hansen. The unit’s newest building, “Courtney Hall,” was dedicated to the only Marine from the battalion to be killed in Iraq — Sgt. Kelley L. Courtney. (Fred Zimmerman / S&S) 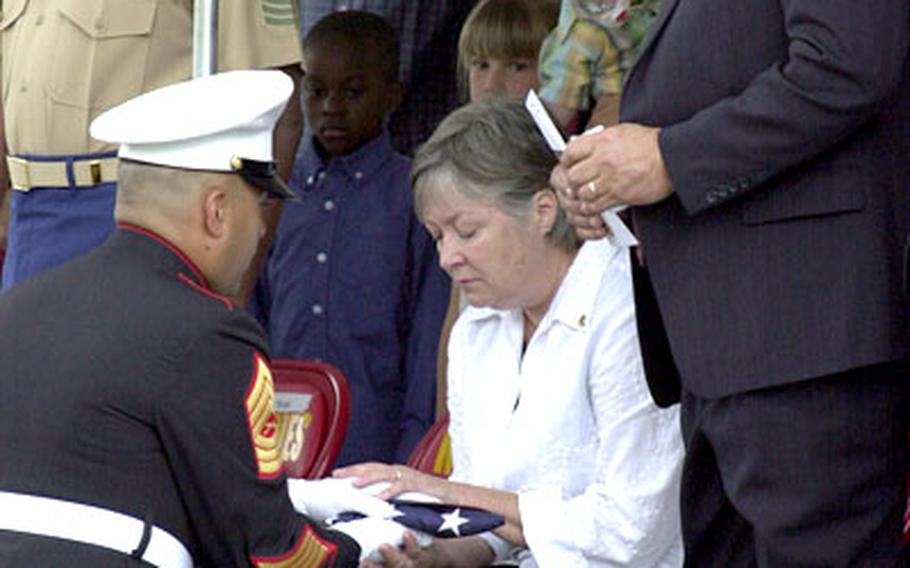 Gena Courtney sits as she receives a folded flag as husband Robert Courtney, right, looks on during a building dedication Friday on Camp Hansen in honor of their son. (Fred Zimmerman / S&S) 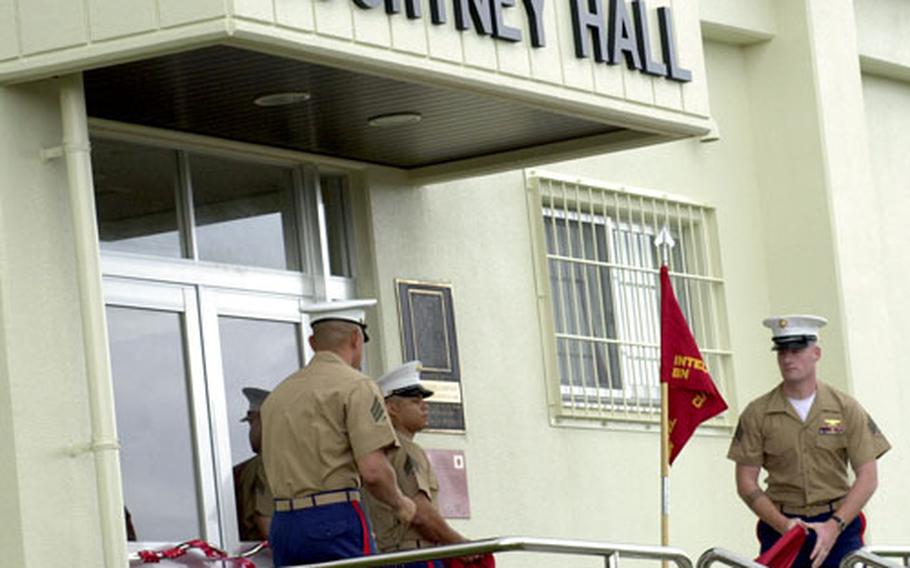 CAMP HANSEN, Okinawa &#8212; The 3rd Intelligence Battalion here dedicated its newest building Friday to its only Marine killed while serving in Iraq.

A counterintelligence and human intelligence specialist attached to the 31st Marine Expeditionary Unit, Courtney was in a convoy truck near Fallujah, Iraq, on Oct. 30. As it passed over a bridge, a sport utility vehicle loaded with explosives suddenly appeared and rammed its side, killing him.

Parents Robert and Gena and uncle Michael Courtney traveled from Macon, Ga., for the dedication.

The parents said their son kept telling them of Okinawa&#8217;s beauty and saying they had to come visit. Robert Courtney said now is about the time they probably would have made that trip.

The Marine also is survived by wife Cindy and children Kellie Marie, 6, and Robert Logan, 2.

Robert Courtney said his son, &#8220;always searching for a way to make his mark,&#8221; had found his calling in Marine intelligence work.

Of the battalion naming a building after her son, Gena Courtney said expressing the gratitude family and friends feel is difficult.

In addition to the name &#8220;Courtney Hall&#8221; above the doors, a plaque outside bears a picture of Kelley and a case just inside displays numerous photos of the fallen Marine and a pair of boots, an overturned rifle and a helmet.

&#8220;Your son was truly a warrior and a hero,&#8221; commanding officer Lt. Col. James Werth told the parents at the ceremony. &#8220;The Marines of this battalion will be reminded of your son&#8217;s sacrifice and service every day when they enter this building.&#8221;

One of the ceremony&#8217;s final speakers was Maj. Dawn Alonso, the 31st MEU intelligence officer who served in Iraq with Kelley. Calling him a &#8220;brave young man and a true hero to those who knew him,&#8221; Alonso said his work in Fallujah undoubtedly saved the lives of many other Marines.