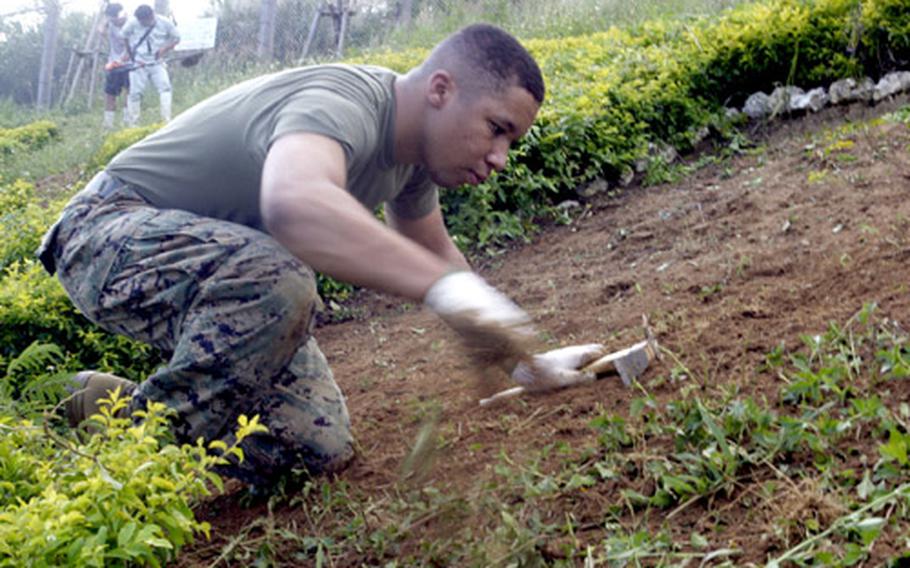 CAMP HANSEN, Okinawa &#8212; One thing every Marine hears when he or she first arrives on Okinawa is that being a good neighbor is just as important as being a good Marine.

And 13 Marines from the Installation Personnel Administration North on Camp Hansen took that to heart recently by spending an afternoon landscaping a section of lawn next to the camp along Highway 14, pruning the topiary garden to form the words: KIN TOWN and CAMP HANSEN.

The Marines meet with members of the Kin Town Chamber of Commerce every Wednesday to work on the garden, according to Marine public affairs.

&#8220;This area is our responsibility as well as the local community&#8217;s,&#8221; said Staff Sgt. Micah T. Wilson, a personnel chief with IPAC North, according to a news release. &#8220;In the last eight months we have come a long way in enhancing this area and giving the Marines a sense of pride in their community.&#8221;

Chamber of Commerce member Mithuko Okuma said he appreciated the Marines&#8217; work and supports their presence in the community.