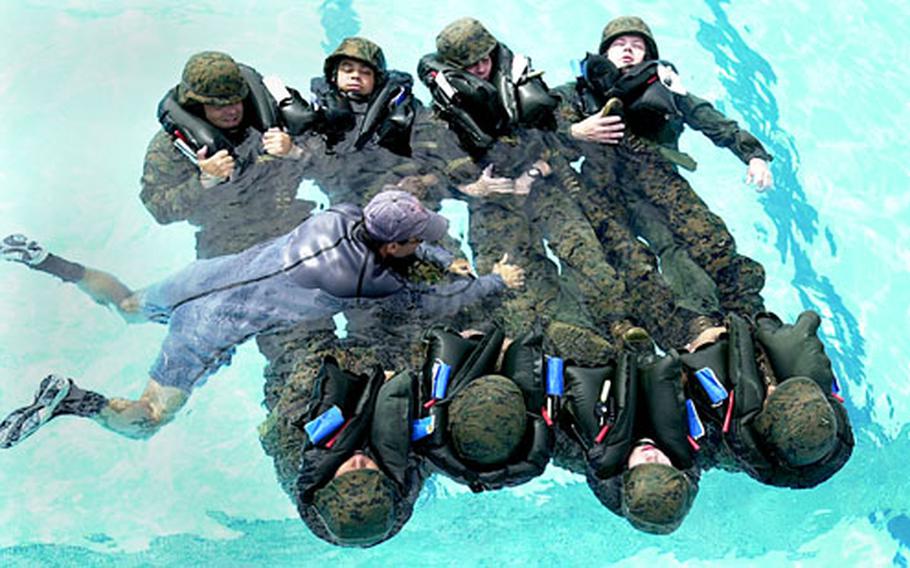 A survival systems instructor demonstrates how a carpet formation can be used to keep injured Marines afloat at the Camp Hansen pool Monday as part of a two-day course on helicopter water egress and survival. (Cindy Fisher / S&S)

A survival systems instructor demonstrates how a carpet formation can be used to keep injured Marines afloat at the Camp Hansen pool Monday as part of a two-day course on helicopter water egress and survival. (Cindy Fisher / S&S) 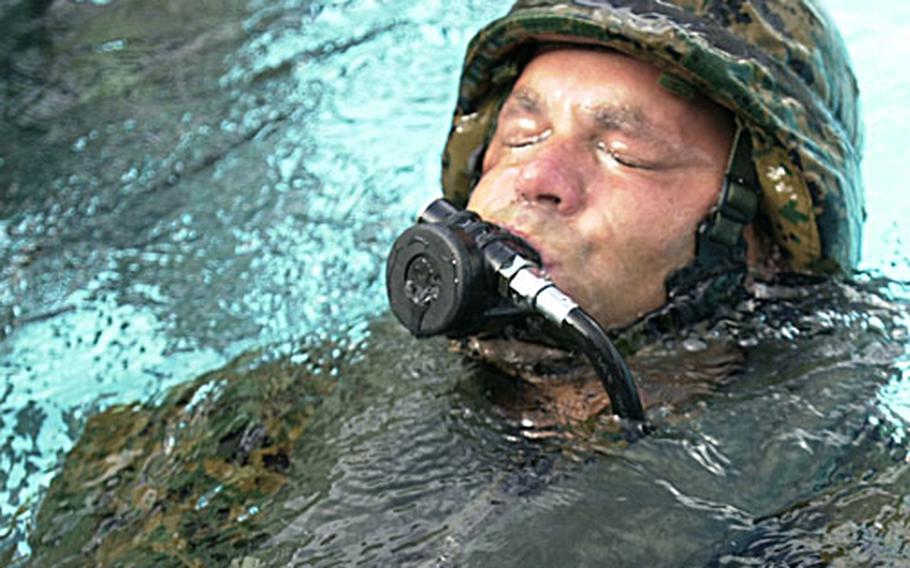 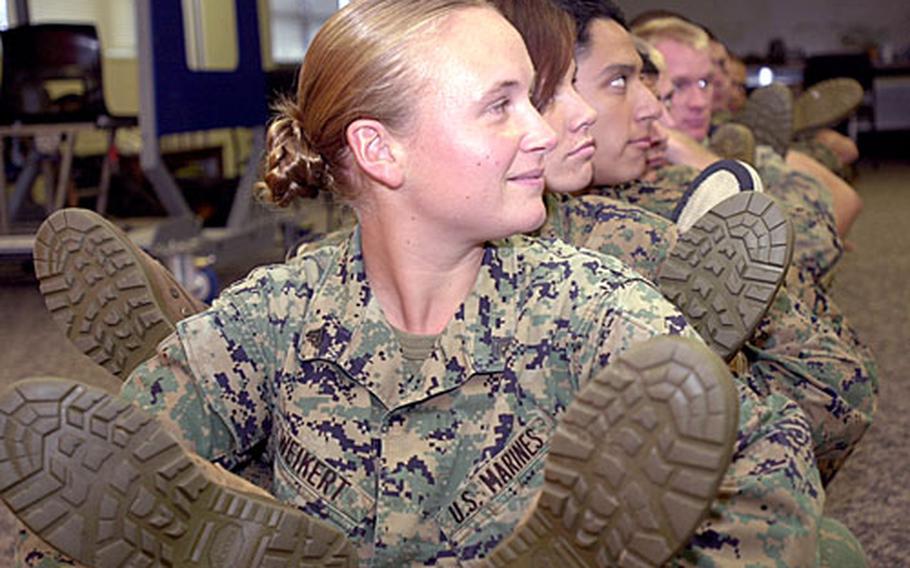 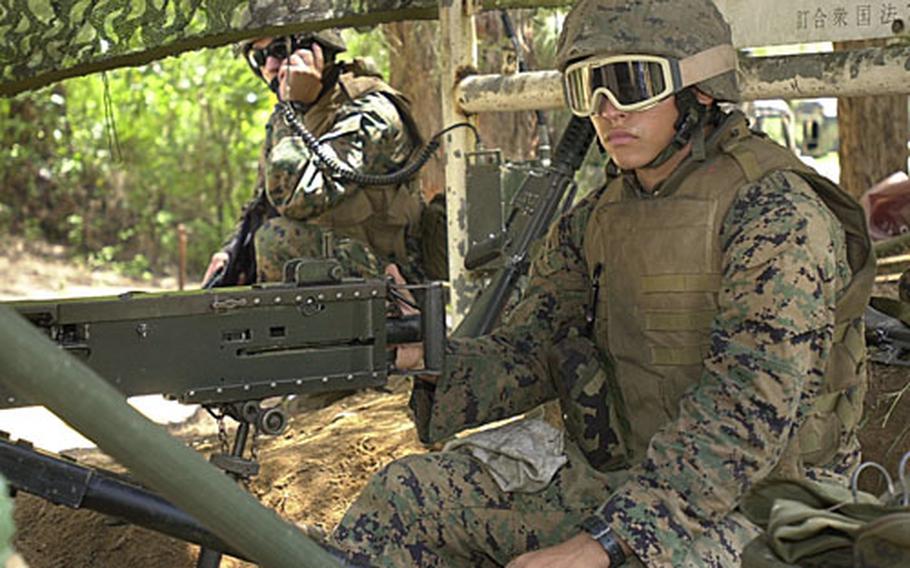 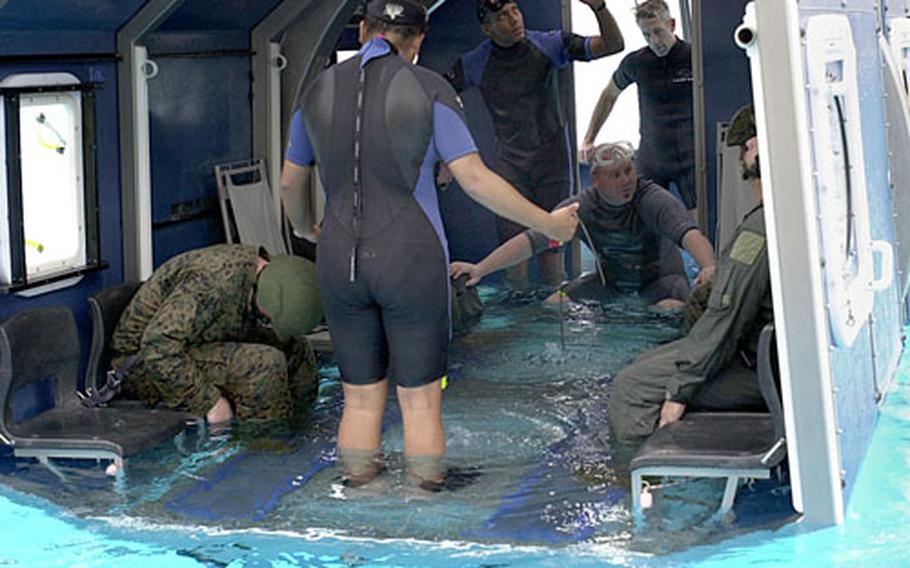 Instructors tell Marines to assume the brace position for ditching as a mock helicopter module enters the water and flips upside down at the Camp Hansen pool on Monday. (Cindy Fisher / S&S)

CAMP HANSEN, Okinawa &#8212; Marines are getting to play in the Camp Hansen pool &#8212; serious play at how to survive a helicopter crash in water, that is.

More than 450 Marines and sailors with the 31st Marine Expeditionary Unit will cycle through the two-day training in the next five weeks. Twenty-four completed the training this week.

The training, provided by Survival Systems USA, can increase the survival rate of a water crash from 3 percent to 85 percent, said Robert Smith, the company&#8217;s chief instructor.

Using a mock-up of a helicopter cabin, instructors on Monday showed 24 students such things as how to get out of a downed CH-46 or CH-53, how to use a breathing device and, once out of the craft, how to survive until rescue.

The training has part of its roots in a 1999 helicopter crash that killed six Marines and a sailor in the ocean off Camp Pendleton, Calif. In the aftermath, the Marine Corps instituted changes in helicopter procedures that included issuing breathing devices to everyone aboard a helicopter, not just the air crew, Smith said.

Staff Sgt. Daron Wilkinson, 36, of Dallas said he has been flying in aircraft for 13 years and &#8220;just now getting this training makes me re-evaluate all the times I flew in helos over water. I feel a lot more confident about getting out now.&#8221;

Elsewhere on Okinawa, some 2,220 Marines and sailors with the 31st MEU have been refining rapid response skills and learning to become a cohesive unit.

That exercise is part of the MEU&#8217;s preparation for its Expeditionary Strike Group Exercise deployment at the end of the month.

The exercise covers the spectrum of possible missions. Among them: helicopter operations; boat raids; reconnaissance and surveillance; humanitarian assistance and disaster relief; rapid planning scenarios; tactical recovery of aircraft and personnel; and combat support, according to Capt. Burrell Parmer, a MEU spokesman.

Every six months, the unit receives a new influx of Marines from island-based units, Camp Pendleton and Hawaii.

The exercise, which is held semi-annually, allows the different elements that make up the unit to work together and become integrated into a team, Parmer said.