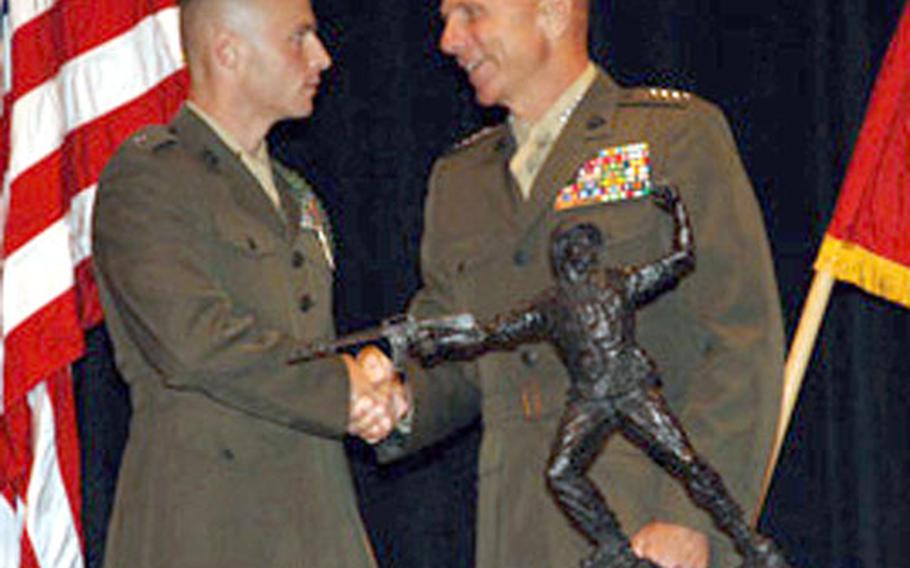 &#8220;It really did have a lot to do with the outstanding young Marines I had under me,&#8221; he said Monday in a telephone interview from his Camp Hansen office, where he now serves as battalion operations officer for the 2nd Battalion, 4th Marine Regiment.

The Leftwich Trophy is awarded annually to a Marine captain in the ground combat arms field. It is named for Lt. Col. William G. Leftwich, a recipient of the Navy Cross and the Silver Star who was killed in action in South Vietnam in November 1970.

Bronzi, 32, was commanding officer of Company G, 2nd Battalion, 4th Marine Regiment, during a seven-month deployment in Iraq. From February to September of 2004, the company conducted operations in the city of Ar Ramadi.

&#8220;The young men I commanded were very tenacious, relentless. They had a tremendous fighting spirit. I was very impressed with them.

While Bronzi credits his Marines for the &#8220;humbling&#8221; honor he received, his Marines throw it right back at him.

&#8220;Captain Bronzi&#8217;s number-one priority has always been his Marines,&#8221; said Gunnery Sgt. Winston Jaugan, according to a Marine press release.

Jaugan, who served with Bronzi in Iraq as the company gunnery sergeant, said Bronzi&#8217;s leadership inspired the Marines under his command.

Bronzi, in his 10th year as a Marine, is a graduate of the U.S. Naval Academy. He said he&#8217;s always wanted to be an infantry officer and credits other officers under whom he&#8217;s served with making him the leader he has become.

Bronzi recently returned from the Philippines, where he took part in training with Philippine marines during Amphibious Landing Exercise 2006. He is scheduled to leave Okinawa in a few weeks for Camp Pendleton, Calif., where his wife, Amy, and children are waiting.