Camp Fuji to honor 13 servicemembers who died in 1979 fire 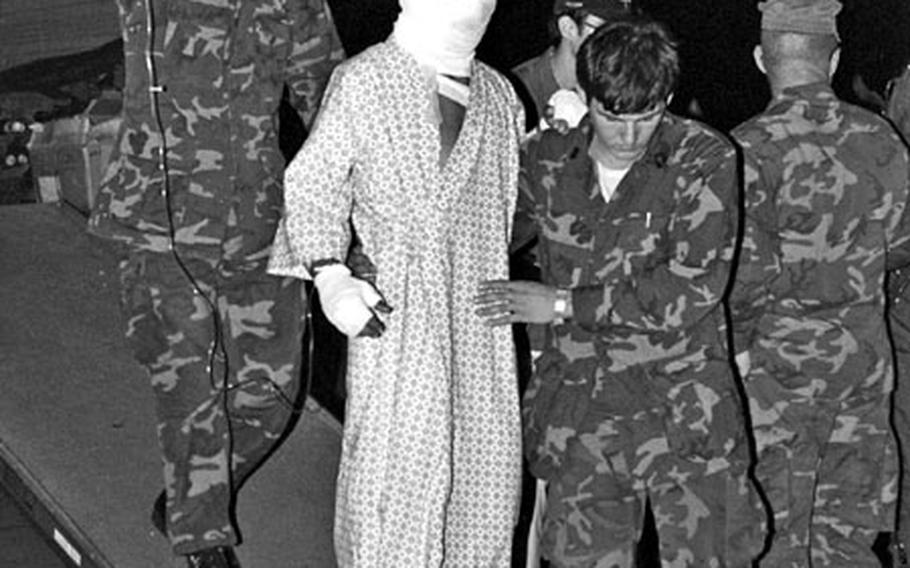 Buy Photo
Navy corpsmen help a burn victim to a Yokota-bound helicopter at Camp Fuji in the aftermath of the October, 1979 fire. (Ron Hatcher/Stars and Stripes)

Buy Photo
Navy corpsmen help a burn victim to a Yokota-bound helicopter at Camp Fuji in the aftermath of the October, 1979 fire. (Ron Hatcher/Stars and Stripes) 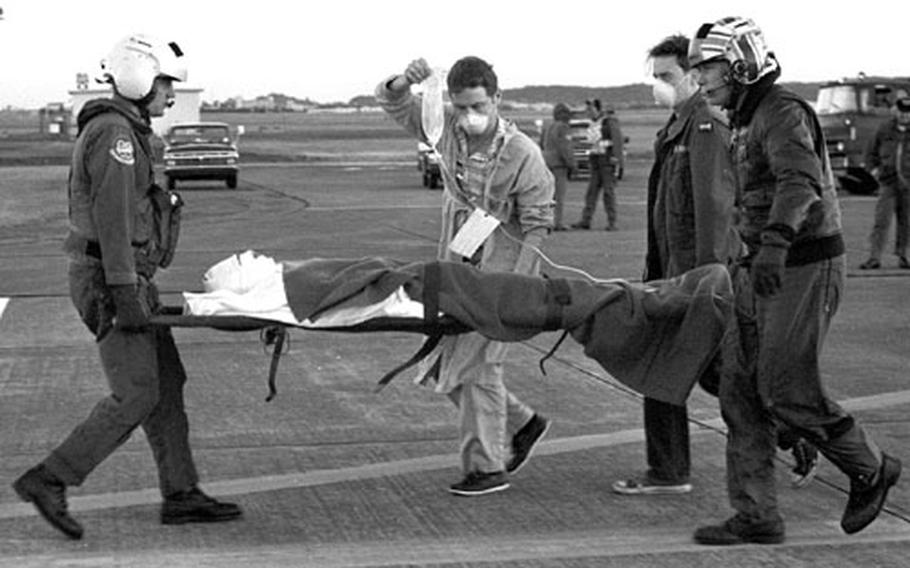 Another victim of the Camp Fuji fire is carried to a waiting helicopter. (Ron Hatcher / S&S file photo) Buy Photo
Three of the 15 Quonset huts destroyed in the 1979 fire at Camp Fuji when a fuel storage bladder burst during a typhoon, sending 5,000 gallons of gasoline cascading into the camp. (Paul Long/Stars and Stripes) 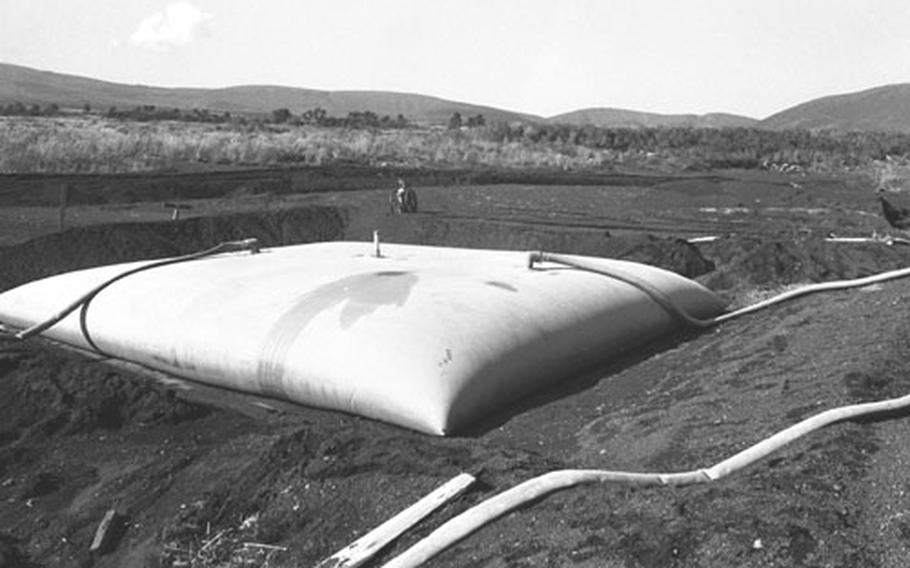 An undamaged fuel storage bladder at Camp Fuji after the fire. A similar one burst during a storm and sent 5,000 gallons of gasoline into the camp, where it ignited. (Paul Long / S&S file photo) The ruptured fuel bladder and wrecked machinery lay strewn in a break in the fuel storage embankment at Camp Fuji after the fire. (Paul Long / S&S file photo)

The observance marks the Oct. 19, 1979, blaze that claimed the lives of 13 Marines and injured dozens more. The gasoline fire was triggered by a powerful typhoon that raked the area with high winds and torrential downpours.

Retired Fuji fire chief Akira Katsumata, who answered that tragic call a quarter-century ago, will be the guest speaker. Local Japanese dignitaries and government officials from nearby Takigahara Garrison, Fuji schools, Gotemba, Oyama and Susono also will attend the 8 a.m. commemoration.

Fuji&#8217;s command element will play key roles during the ceremony, which is being conducted by Sgt. Maj. Randolph L. Mitchell.

In October 1979, Typhoon Tip, then the strongest storm to reach mainland Japan in 13 years, brought 115 mph winds and heavy rains to Fuji. More than 1,250 Marines from Camp Schwab, Okinawa, were being housed in Quonset huts on the installation&#8217;s upper half for training.

A fuel farm, which consisted of two rubber storage bladders kept in place by a retaining wall, sat just up the hill. After rains from Tip eroded the wall and allowed a bladder to break free, hoses sprang loose, releasing 5,000 gallons of gasoline.

The fuel skimmed the water&#8217;s surface and ran across upper Fuji and into the Quonset huts. Shortly after 1:40 p.m., a heater inside one of the huts ignited the gasoline.

Firefighting vehicles arrived on the scene within 10 minutes. Emergency units from Takigahara Garrison, Gotemba City and the Gotemba-Oyama Fire Department also responded. By 3:45 p.m., the blaze was under control but still not extinguished entirely.

Fifty-one Marines and three Japanese nationals were injured; 15 huts were destroyed and several other buildings were damaged.

Of the 54 people taken to medical facilities, 13 Marines later died from their injuries.

&#8220;Remembering our Marine brothers is a mandatory thing to do,&#8221; he said. &#8220;When Marines make the ultimate sacrifice, we have a duty to remember that sacrifice. I find it an honor to stand at attention and pay tribute to those who have fallen before me.&#8221;