Camp Fuji: It’s all about having a blast 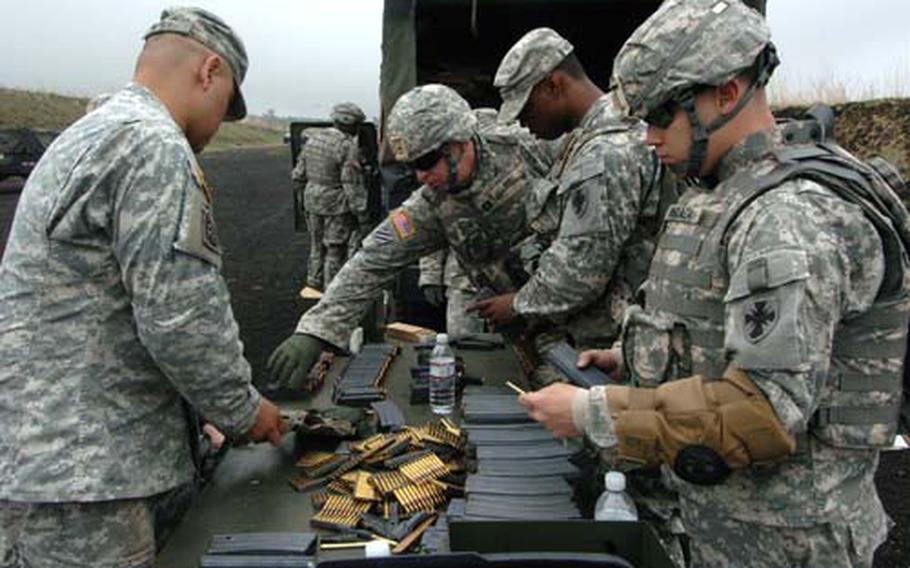 35th Combat Sustainment and Support Battalion soldiers sort through ammo during their one-week stay at Camp Fuji, where they conducted weapons training to update their soldier qualifications. (Tim Wightmanl / S&S)

35th Combat Sustainment and Support Battalion soldiers sort through ammo during their one-week stay at Camp Fuji, where they conducted weapons training to update their soldier qualifications. (Tim Wightmanl / S&S) 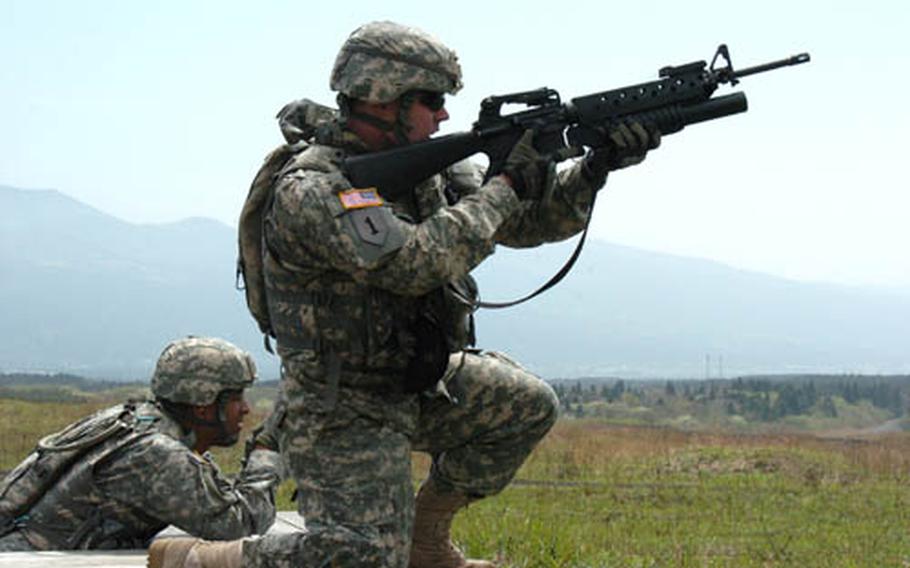 A soldier with 35th Combat Sustainment and Support Battalion measures his shot while training with the M-203, with an underslung grenade launcher, at Camp Fuji. (Tim Wightmanl / S&S) 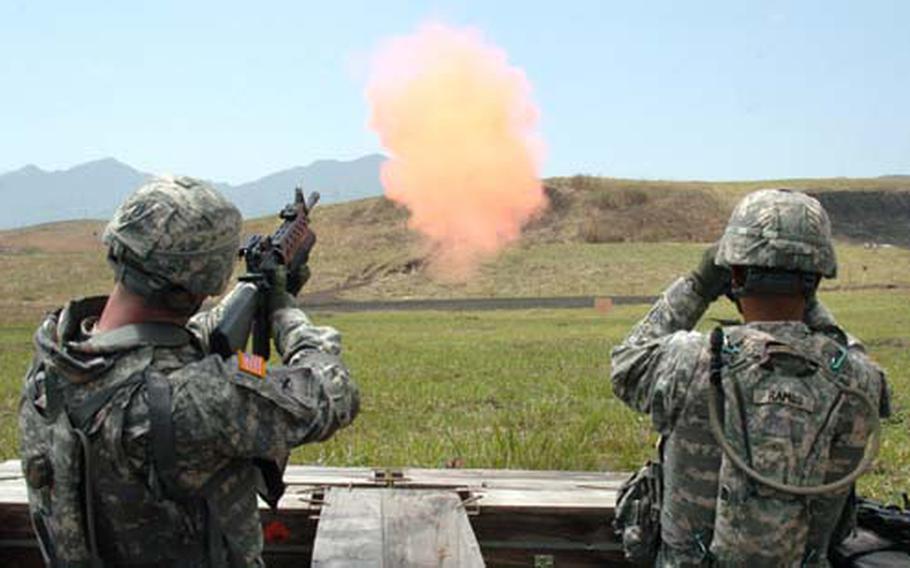 A nonlethal 40 mm grenade explodes seconds after a 35th Combat Sustainment and Support Battalion soldier shoots it while training on the grenade launcher at Camp Fuji. (Tim Wightmanl / S&S) 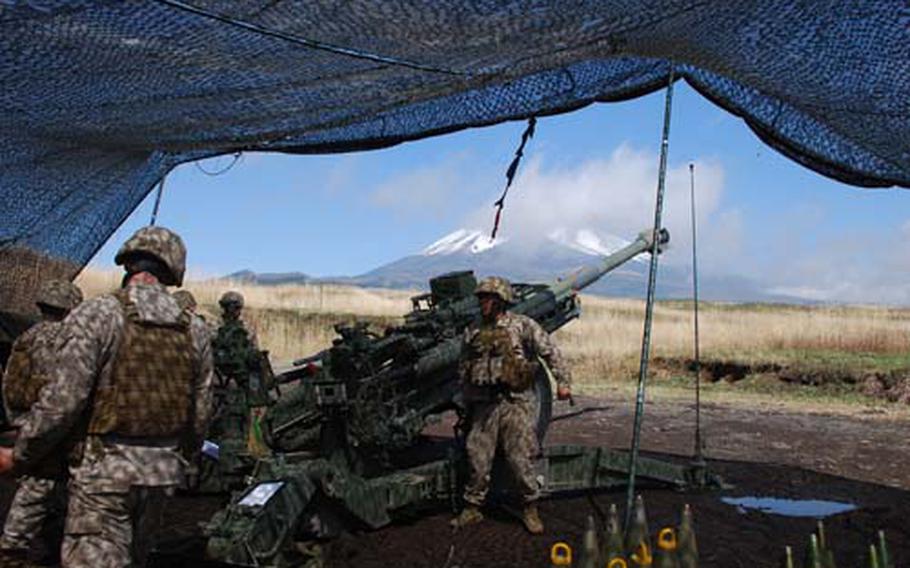 Marines fire a 155 mm round from a M777 howitzer, temporarily hiding Mount Fuji from view, while training at Camp Fuji. (Charles Arrants / Courtesy of the U.S. Marine Corps) 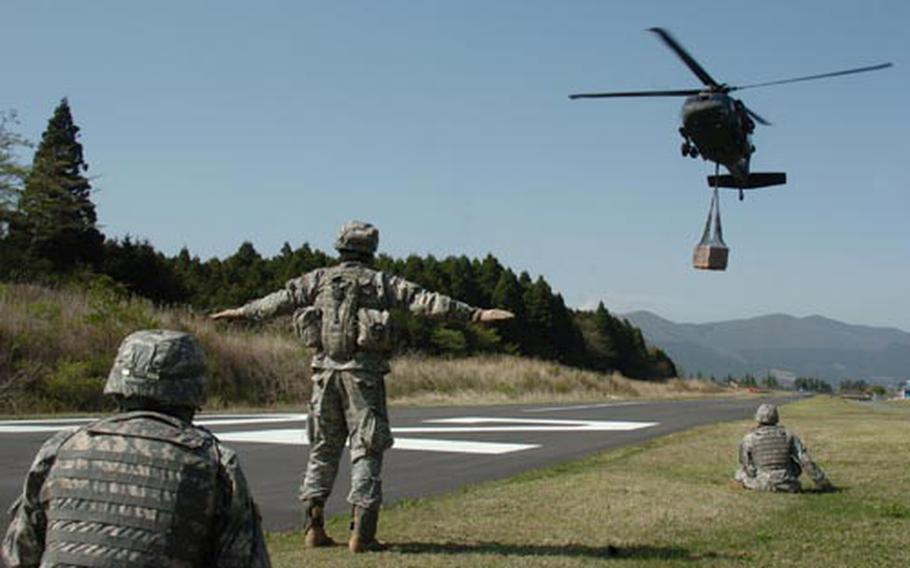 CAMP FUJI, Japan &#8212; A tiny, two-inch square on a map posted in the base headquarters&#8217; range control room represents this Marine post located at the bottom of Japan&#8217;s most celebrated mountain &#8212; Mount Fuji.

For anyone who has been to Camp Fuji, that visual representation says it all.

Inside the gates, there are a few barracks, an exchange, a gym, an obstacle course and a small flight line. You don&#8217;t see many cars. Nothing is especially far from anything else.

But at any given moment, you can hear a loud crack or boom, and it&#8217;s a good bet it didn&#8217;t come from anywhere inside that two-inch square.

It came from what the rest of the range control map represents &#8212; 20,000 acres a person is not likely to see unless you&#8217;re a servicemember who brought along combat gear.

Over the past month, units from the Army, Navy and Marine Corps have brought plenty of such equipment. Camp Fuji&#8217;s commanding officer, Col. Robert Golden, said the base has hosted significantly more servicemembers than normal so far this year.

Stars and Stripes spent a couple days last week with three of those units.

The 3rd Battalion, 12th Marines out of Camp Hansen, Okinawa, was training on its signature M777 howitzer in preparation for an upcoming Middle East deployment.

It was the Japan debut for the 7,000-pound gun, classified as a lightweight 155 mm howitzer. In combat, it has a range of about 15 miles and can take out buildings and vehicles, the Marine cannoneers said.

"The radar can observe the round," he said. "Then we send the coordinates back, they make corrections in their fire-direction control center, and it puts the gun on target."

"The Howitzers performed pretty good," Castellanos said. "There were a couple of things here and there, but overall, they did their job."

Some other artillery Marines were a longer way from home than their Okinawa counterparts.

Members of 2nd Battalion, 11th Marines from Camp Pendleton, Calif., deployed to Camp Hansen in January to support the 31st Expeditionary Unit. With the rest of the battalion in Philippines for the annual Balikatan exercise, the troops here &#8212; who also fire howitzers &#8212; accompanied the 3rd Battalion, 12th Marines to Fuji.

"Our commanding officer got with 3/12 to see if we could come out here and get some training &#8230; instead of just sitting around," Sgt. Brandon Schroeder said.

Many in the California unit couldn&#8217;t get past the Fuji weather when describing their experience at the camp.

"It&#8217;s really cold and wet up here," Lance Cpl. Travis Carmichael said. "We actually went to the field three times. It rained on us twice."

Schroeder for one welcomed it.

The Army&#8217;s 35th Combat Sustainment and Support Battalion from Camp Zama pitched their combat tents by the softball field and set out over the course of the week to knock out the unit&#8217;s quarterly combat training, which can be conducted only at Camp Fuji, said Command Sgt. Maj. Chris Nunez.

The unit functions as a headquarters element for supporting battalions during disasters and defense operations. While at Fuji, the troops trained with M-16 rifles, 9 mm pistols and grenade launchers.

And to confirm that their chemical-biological masks worked, the soldiers had to use them &#8212; and then take them off &#8212; in a tent filled with tear gas.

Staff Sgt. Charles Sterling &#8212; heaving, gasping and teary-eyed &#8212; was still feeling the effects a few minutes after his run-in with the gas.

"This is a burning that&#8217;s unreal, like you&#8217;re getting acupunctured like a million times in the face," Sterling explained.

Both Sterling and Staff Sgt. Benito Quintanilla agreed the highlight of their week was the close-quarters marksmanship training, when they fired their M-16s in standing position, switching between targets on either side of them at close range.

"It&#8217;s something that very few noncombat units get to practice," Quintanilla said of the close-quarters shooting.

"It improves close-quarter and mid-range accuracy. They&#8217;re skills that aren&#8217;t practiced very often but are very important while in combat."