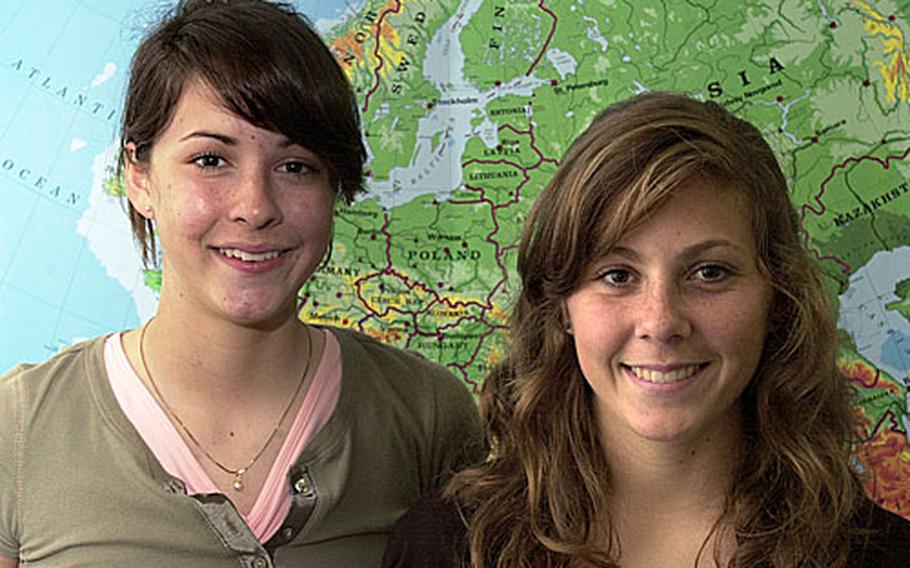 Sisters Kaitlyn, left, and Kara Koeneke, both 16, sophomores at Kubasaki High School, were recently accepted to attend the Oxford Traditions 2007, part of the Oxbridge Academic Programs, at the University of Oxford in England in July. (Cindy Fisher / S&S)

CAMP FOSTER, Okinawa &#8212; Kubasaki High School sophomores Kaitlyn and Kara Koeneke, who with their brother, Joseph, are triplets, describe themselves as typical teenagers.

Not so, according to teachers and coaches.

Both also belong to the National Honor Society and Fellowship of Christian Athletes. Between them, they participate in five school sports: volleyball, basketball, softball, soccer and cross-country.

And because they excel in school, they were recently accepted to attend Oxford Traditions 2007 at the University of Oxford in England.

Oxford Traditions is a monthlong program in July in which students in sophomore through senior classes study a major and minor of their choice.

The girls&#8217; father, Col. Rick Koeneke, with the Marine Corps Bases Japan Staff Judge Advocate on Camp Foster, said he and his wife, Julie, encouraged the girls to apply.

He said he was stunned they were accepted.

About 85 percent of accepted students are American, according to the university&#8217;s Oxbridge Academic Programs Web site.

In the past few years, only one other Department of Defense Dependents Schools student has been accepted to the program, said Charles Steitz, a DODDS spokesman.

Though they don&#8217;t yet know what they want to see in England, both said it will be a great break from their five brothers.