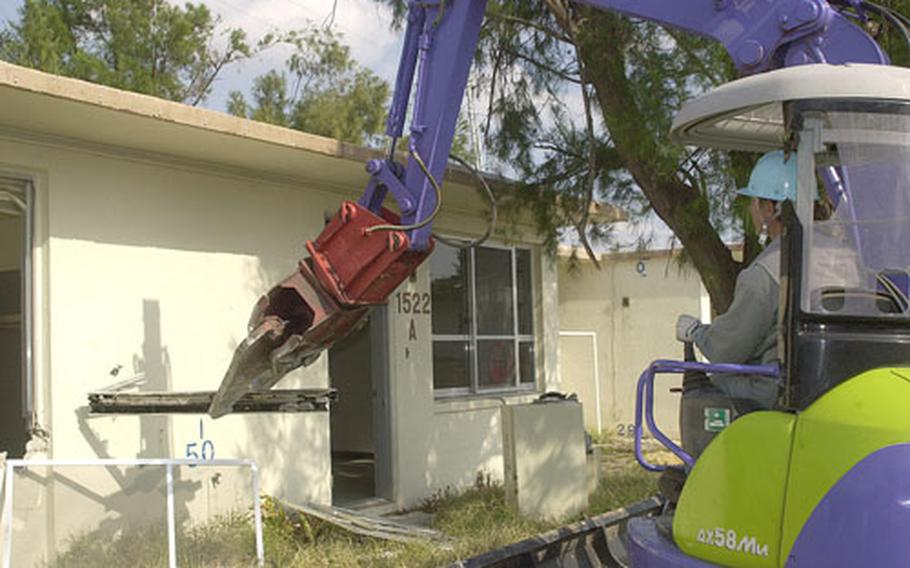 A heavy equipment operator uses a mechanical claw to rip off parts from a single-family home at Sada Family Housing Area. Demolition crews have begun knocking down hundreds of older homes in the housing area to make way for two high-rise towers totalling 136 units and 194 single- or two-story houses. (Carlos Bongioanni / S&S)

CAMP FOSTER, Okinawa &#8212; You could call this a grand house razing.

Japanese &#8220;destruction&#8221; crews are knocking down the walls of former military housing built in 1955 to make way for new high-rise apartment towers and multiplexes in a corner of this Marine base known as Sada Family Housing.

It&#8217;s all part of a base return-and-consolidation plan that eventually is to release 21 percent of the property the U.S. military now uses on Okinawa. The bases currently cover approximately one-fifth of the island.

The bilateral Special Action Committee on Okinawa approved the plan in 1996. The land return will be complete in 2008, when the 245 acres of Camp Lester, current site of the U.S. Naval Hospital, are returned.

A new hospital is planned for another section of Camp Foster.

The Sada project is the second phase of a building program funded by the Japanese Defense Facilities Administration Agency. Last year, two high-rise apartment towers were built across Highway 330, on the Kishaba Housing side of Camp Foster.

The Sada towers both will be nine stories tall. Each will consist of 68 three- or four-bedroom apartments, for a total of 136 units, said Steven Fazzini, the Air Force SACO Program Manager.

The Air Force is responsible for all family housing on Okinawa military bases.

Also to be built at Sada are 194 multiplex units, Fazzini said.

The housing units to be razed were vacated in April. Most of the residents who were not leaving Okinawa moved into new apartment towers in the Kishaba Housing section of Camp Foster.

A DFAA Naha Bureau spokesman said the demolition project includes leveling the ground in preparation for the new construction. This phase, budgeted for approximately $1.3 million, should be complete by the end of March, he said.

Estimates for the construction phase were not available.

The land was turned over to Japan&#8217;s government for demolition and construction phases. It will be returned to the U.S. military upon completion, sometime in 2004.

Occupancy can begin as soon as a bridge is built connecting the Sada area with the rest of Camp Foster, Fazzini said. The housing area has a separate entrance off Highway 330 that was considered a traffic hazard.

A tunnel now is being built to join the Kishaba housing area with the main base. When it&#8217;s completed, traffic on the highway, known for massive snarls during the evening rush hours, should be greatly alleviated, Fazzini said.

The Sada Housing bridge will cross a creek and come out somewhere near the Camp Foster Youth Center.

Planned for future Camp Foster construction are new townhouses to be built in the Chatan, East Futenma and Kishaba Housing areas by 2011, replacing part of the Plaza Housing area.