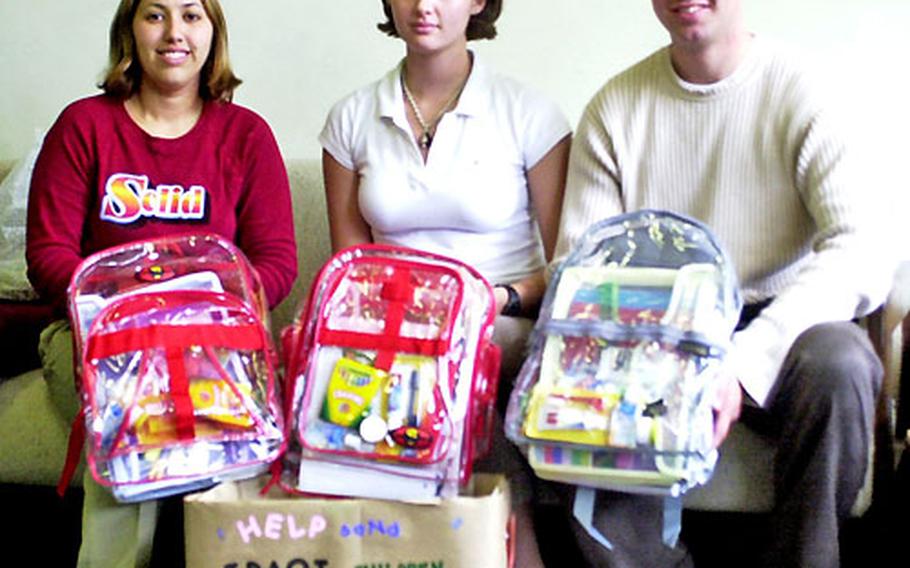 From left, Jessica Larson and Lance Cpls. Jenna Bennett and Spencer Watts hold school supplies they are sending to Marines in Iraq. Larson said the Marines use the items as "ice breakers" with children there. (Fred Zimmerman / S&S)

CAMP FOSTER, Okinawa &#8212; Despite being a world away from the war in Iraq, a group of individuals here decided to answer a call to help arm Marines with tools that will aid them in their mission.

But these aren&#8217;t tools that will destroy things; they are tools that can help create friendships and build minds.

Jessica Larson, the area clearance coordinator on Camp Foster, began a school supply drive dubbed &#8220;Operation Education&#8221; just more than a month ago. She said she got the idea from a news release she saw online about a Marine from the 24th Marine Expeditionary Unit needing school supplies for Iraqi children.

Larson contacted the Marine in the news release, Lt. Col. Robert Labriola, who is with the MEU command element, and asked if he still was accepting donations. Labriola e-mailed Larson back, saying the unit was still in Iraq and putting the supplies to good use.

Larson then went to work, sending an e-mail throughout the building where she used to work &#8212; the Installation Personnel Administration Center &#8212; asking workers to donate.

Several Marines and civilians donated items, and two Marines did even more by volunteering their time. Lance Cpls. Jenna Bennett, a passport office worker, and Spencer Watts, a personnel clerk, decided to give Larson a hand.

The group began collecting everything from backpacks and notebooks to tissues and glue. Larson said the most useful items they have collected are pens, paper, crayons and notebooks, but they haven&#8217;t received any three-ring binders &#8212; something they also would like to include, she said.

So far, Larson, Bennett and Watts have collected a total of 10 backpacks filled with an array of supplies.

Also included in each bag, Larson said, is a disposable camera and a poem. She said she hopes the Marines, and in turn the children who receive the items, take photos and send the film back so they can see the impact the supplies make.

While Larson, Bennett and Watts said they are pitching in to make a difference in Iraqi children&#8217;s lives, they also said the mission has an additional objective.

The first shipment of supplies was being sent either Saturday or early this week, Larson said. But the group doesn&#8217;t want their efforts to stop there.