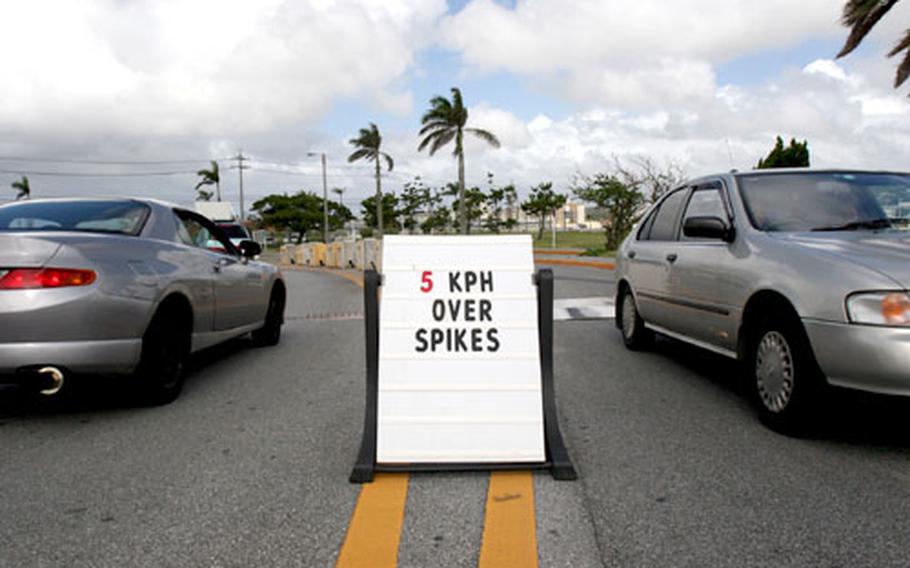 A sign cautions motorists traveling in and out of Gate 1 at Camp Foster, Okinawa, to drive 5 kph when driving over security spike strips and metal barriers. Base officials posted the signs in late September in response to several incidents in which vehicles were damaged by security spike strips or metal barriers at Okinawa Marine Corps base entrances. (Cathryn Lindsay / Courtesy of U.S. Marine Corps)

CAMP FOSTER, Okinawa &#8212; Marine officials are warning drivers to slow down when exiting camps to reduce the risk of damage to tires caused by force-protection measures at the gates.

The Provost Marshal&#8217;s Office has received several complaints about damage to vehicle tires caused by spike strips in the ground, according to 1st Lt. Timothy Martin, officer in charge of the Crime Prevention Unit. The spikes are used as a security measure to &#8220;prevent any potential unauthorized access by vehicular means to any of our camps or installations,&#8221; he said.

The spikes, embedded in the surface of outbound lanes on all camps, lower when driven over in the intended direction. But if an inbound car were to drive into the outbound lane, the spikes would not drop and the car&#8217;s tires would be punctured.

But, Martin said, recent complainants say the spikes aren&#8217;t dropping as they should and are causing unintended damage to tires. Martin said he believes the damage results from motorists driving over the strips too quickly, possibly trying to make green lights. Signs have been posted in the outbound lanes warning drivers to slow down.

Some motorists have suggested taking the strips out, Martin said, but he added that is not an option due to security issues.

Martin said the Provost Marshal&#8217;s Office also has seen several incidents of flat tires after drivers forget the spikes are there and back over them. Martin said drivers whose cars sustain damage from the spikes may submit a claim against the government but must prove the damage was out of their control.

Motorists wishing to file a claim can do so through the Office of the Staff Judge Advocate in Building One on Camp Foster, according to Chief Warrant Officer 2 James Clift, SJA claims officer. Clift said the office will help get the proper paperwork together before sending a case to higher headquarters for adjudication, which takes from four to eight weeks. Each claim is considered on a case-by-case basis, he said.