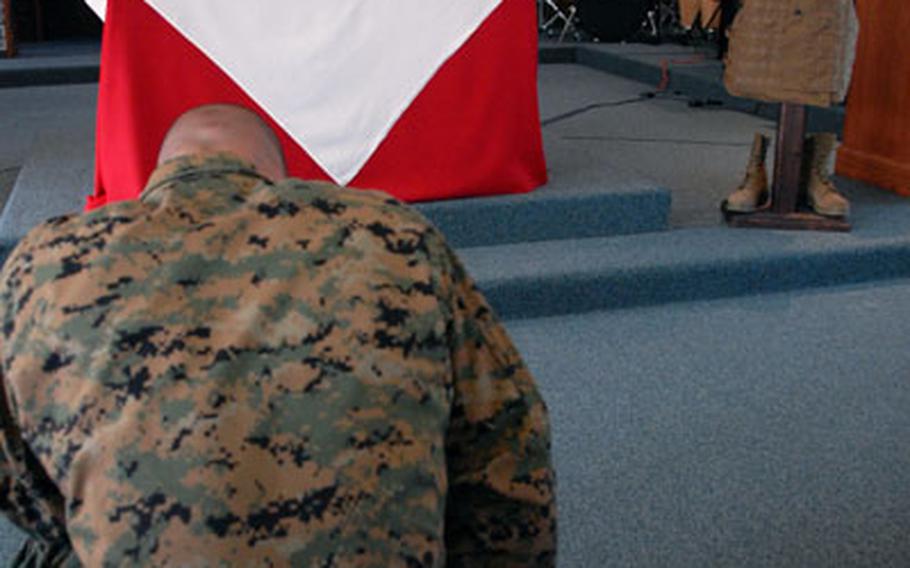 A Marine kneels in front of a photograph of Cpl. Jennifer Parcell, a Marine with 3rd Marine Logistics Group who was killed in Iraq last week. At the Camp Foster memorial service Tuesday, her comrades described her as a "fire cracker" and an "extraodinary Marine." A photo of Parcell with friends is on the projector screen in the background. (Megan McCloskey / S&S)

A Marine kneels in front of a photograph of Cpl. Jennifer Parcell, a Marine with 3rd Marine Logistics Group who was killed in Iraq last week. At the Camp Foster memorial service Tuesday, her comrades described her as a "fire cracker" and an "extraodinary Marine." A photo of Parcell with friends is on the projector screen in the background. (Megan McCloskey / S&S) Lance Cpl. Stephen Colon(right) listens to "Amazing Grace" being played on the bagpipes at a memorial service Tuesday for Cpl. Jennifer Parcell, who was killed in Iraq last week. (Megan McCloskey / S&S) 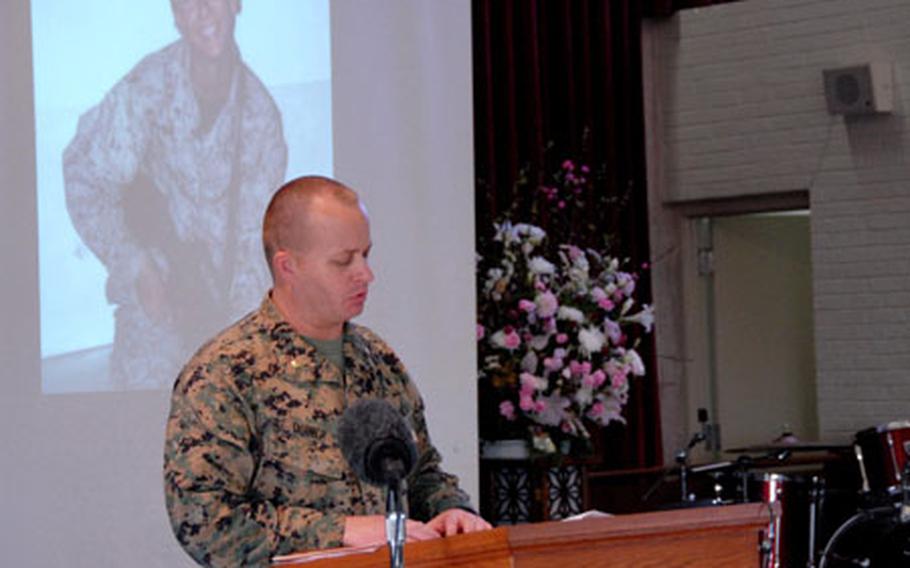 Maj. Ken Quiner pauses to collect himself Tuesday while speaking at a memorial service for Cpl. Jennifer Parcell. He said Parcell was a Marine "who understood the big picture" and knew the "value of her service." (Megan McCloskey / S&S)

CAMP FOSTER, Okinawa &#8212; Cpl. Jennifer Parcell was petite, but one learned quickly that underestimating her was foolish.

Her relentless can-do attitude led her to volunteer for Iraq. And then to volunteer for the Lioness Program, which provides female Marines for searches of Iraqi women to respect Muslim cultural mores.

Parcell was killed Feb. 7 in Anbar province when a woman she was searching blew herself up with a suicide vest. Parcell had started doing the searches a week before and was three weeks from going home.

Though her small frame was far from intimidating, Radcliff wrote, Parcell &#8220;proved [that] not the size or the sex of the person mattered one bit.&#8221; She never shied from physically demanding tasks; she &#8220;would jump right in there with the guys,&#8221; he said.

Radcliff recalled how after spending his first four months on the job in the Corps with only male Marines, he forgot there were such things as female Devil Dogs.

He wrote he hadn&#8217;t thought women even should be allowed to be Marines, but when he met Parcell, his &#8220;dim-witted thought was completely erased forever.&#8221;

First Sgt. Lenny Maldonado, Parcell&#8217;s former company first sergeant, recalled in an e-mail from Iraq that at her arrival at Landing Support Company, &#8220;She looked so young and innocent.&#8221;

Maj. Ken Quiner, addressing the packed chapel in a voice shaken by grief, said when he learned Parcell was coming to his unit, he was concerned how a female would fit in with his male Marines &#8212; worries quickly dismissed, he said, when Parcell immediately won them over and became their &#8220;honorary little sister.&#8221;

But the dedicated and eager-to-learn Parcell did send some sparks flying among her leaders, he said.

&#8220;I recall very many long and heated battles between Marine leaders who all wanted Cpl. Parcell on their team,&#8221; Quiner said.

Tears welled when he described how she beamed when wearing her dress blues and couldn&#8217;t keep from smiling when being promoted to lance corporal.

As he spoke, a slideshow of photos played on a large screen behind him &#8212; casual snapshots of a 20-year-old&#8217;s life: Parcell belting out karaoke; in cammies with a fellow Marine; with a putter resting on her shoulder; stoic-faced carrying a giant pack; smiling with her rifle; on a helicopter.

She was getting an associate&#8217;s degree and went to yoga classes.

Radcliff&#8217;s letter told an amusing anecdote that got a chuckle from the somber audience and gave a sense of who Parcell was.

That was Parcell, Radcliff wrote: Always living in the moment.