Camp Echo packs up in Iraq with little fanfare 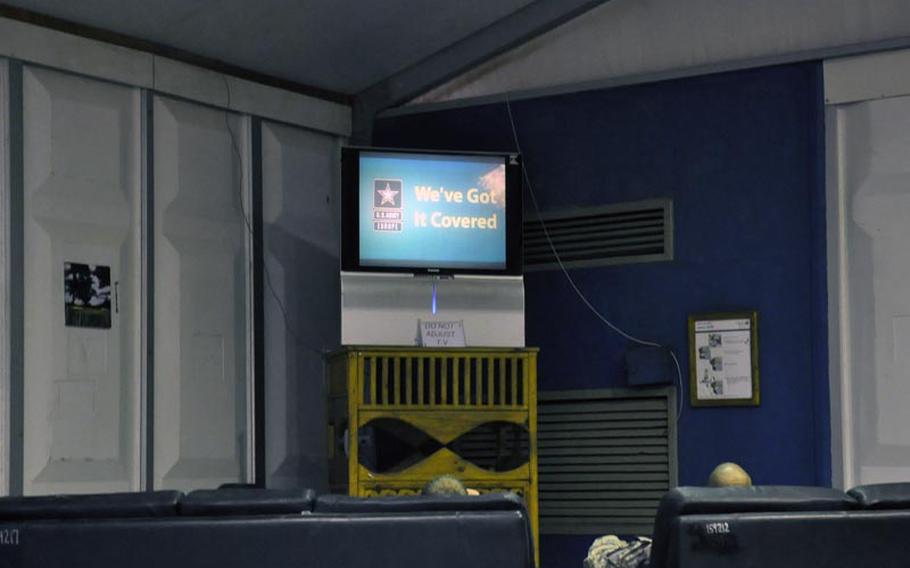 Buy Photo
Even with everyone set to leave the base in a few days, the American Forces Network was still pumping out programming at Iraq&#39;s Camp Echo, even as the rest of the chow hall went into a more austere mode. All Americans had left the base by early Saturday morning. (Geoff Ziezulewicz/Stars and Stripes)

Buy Photo
Even with everyone set to leave the base in a few days, the American Forces Network was still pumping out programming at Iraq&#39;s Camp Echo, even as the rest of the chow hall went into a more austere mode. All Americans had left the base by early Saturday morning. (Geoff Ziezulewicz/Stars and Stripes) 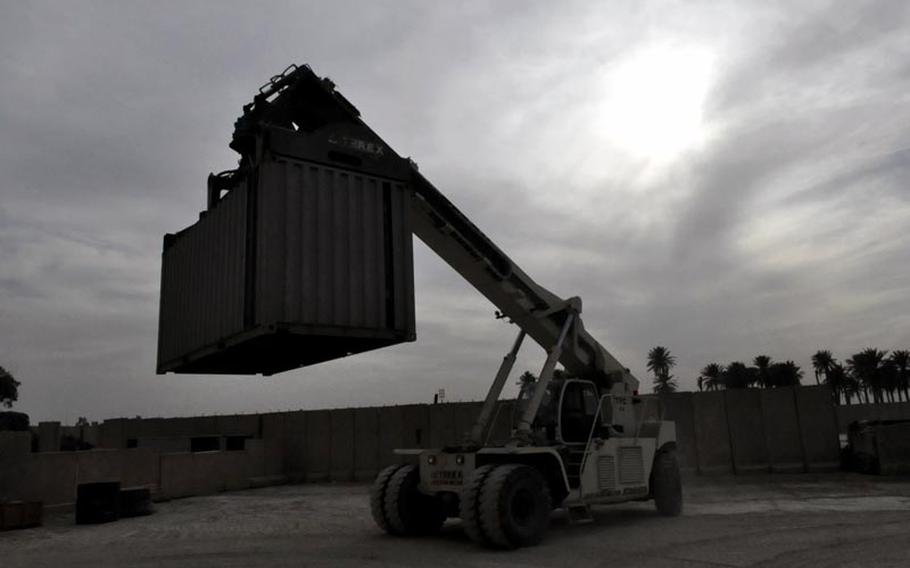 Buy Photo
One of the final cargo containers at Camp Echo, Iraq, is moved toward a flatbed Thursday. The base was vacated by all U.S. personnel a few days later. (Geoff Ziezulewicz/Stars and Stripes) 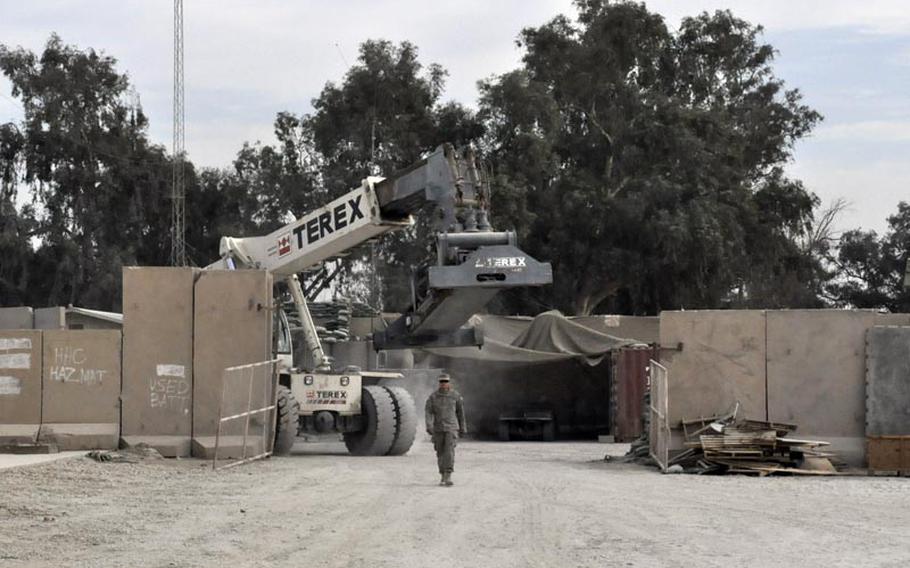 Buy Photo
A soldier leads a cargo mover Thursday at Iraq&#39;s Camp Echo in anticipation of the base closing later in the week. (Geoff Ziezulewicz/Stars and Stripes) 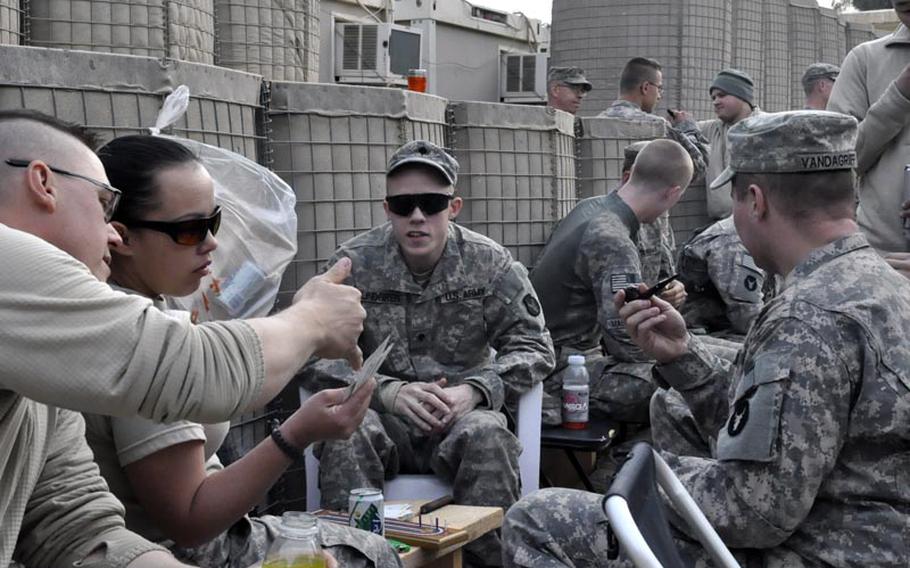 Buy Photo
Soldiers with Alpha Company, 1st Combined Arms Battalion, 194th Armor, kick back with a barbecue and some cards Thursday at Camp Echo, Iraq. Since President Barack Obama announced the full withdrawal of U.S. troops from Iraq, the unit has provided security escorts to convoys across the country that are moving materiel down south to Kuwait. (Geoff Ziezulewicz/Stars and Stripes) 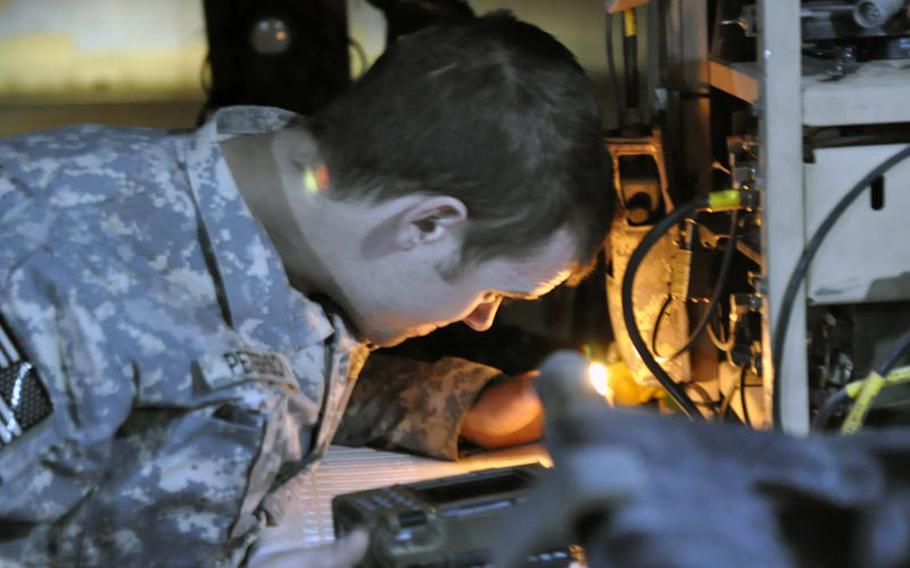 Buy Photo
Army Spc. Jordan Peterson, of the 1st Combined Arms Battalion, 194th Armor, works on his radio aboard his Mine Resistant Ambush Protected vehicle Friday night at Camp Echo, Iraq. The battalion has been tasked in recent months with providing security for convoys moving materiel off of bases closing in Iraq. (Geoff Ziezulewicz/Stars and Stripes) 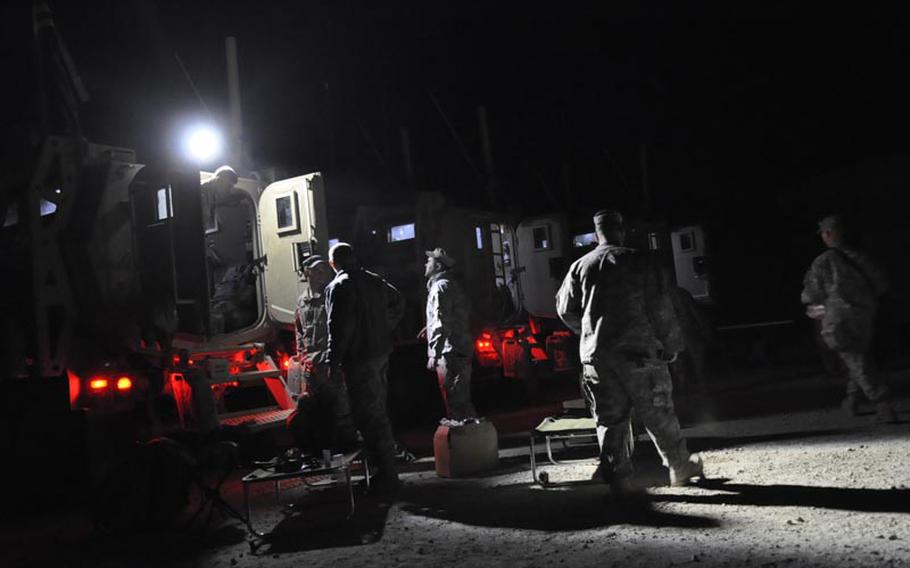 Buy Photo
Soldiers with the 1st Combined Arms Battalion, 194th Armor, wait to roll out of Camp Echo, Iraq, on Friday night. It was one of only two U.S. bases still open in Iraq as of early Saturday. (Geoff Ziezulewicz/Stars and Stripes) 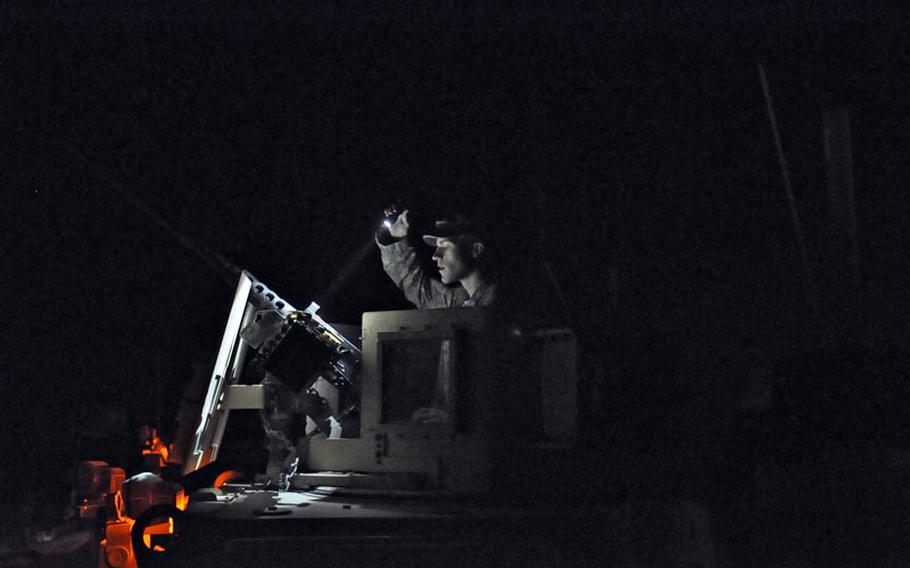 Buy Photo
Army Spc. Steven Polack, with the 1st Combined Arms Battalion, 194th Armor, checks his mounted weapon on his MRAP Friday night at Camp Echo, Iraq. The unit arrived there early Wednesday and was escorting a convoy back to Kuwait. (Geoff Ziezulewicz/Stars and Stripes) 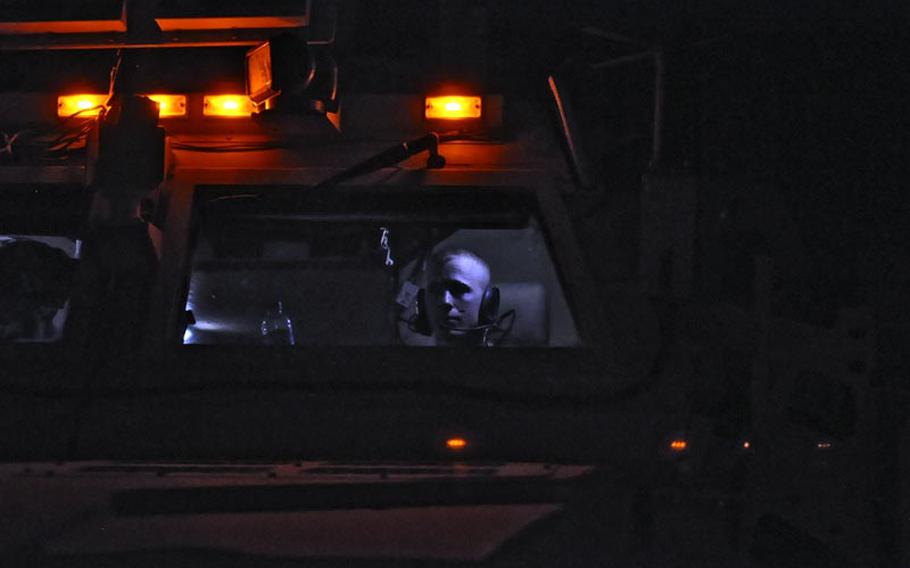 Buy Photo
Spc. Michael Mossmann, of the 1st Combined Arms Battalion, 194th Armor, waited in his MRAP before his convoy rolled out of Camp Echo, Iraq, toward the Kuwaiti border, the unit&#39;s final mission in Iraq and one of the last of the war. (Geoff Ziezulewicz/Stars and Stripes) 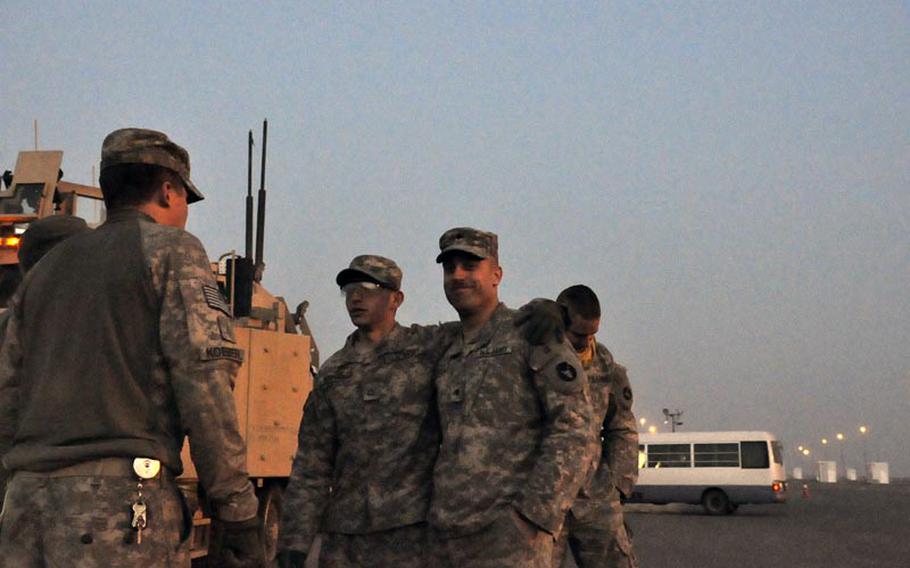 Buy Photo
After safely crossing the border from Iraq into Kuwait for the final time Saturday morning, Army Pfc. Todd Wenzel, left, and Spc. Tim Kuechle, and other members of the 1st Combined Arms Battalion, 194th Armor, breathe a sigh of relief and celebrate. (Geoff Ziezulewicz/Stars and Stripes) 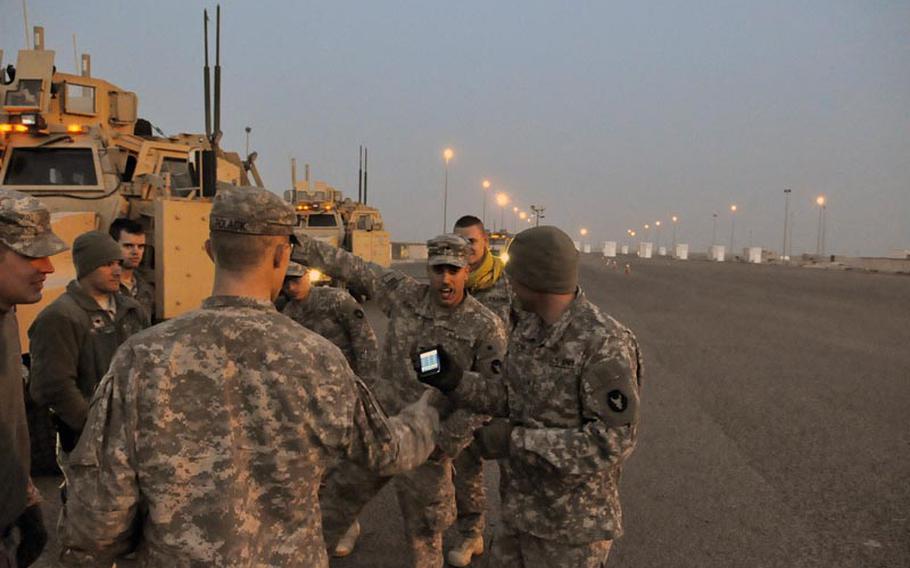 Buy Photo
Soldiers with the 1st Combined Arms Battalion, 194th Armor, clown around Saturday morning after safely crossing over from Iraq to Kuwait for the final time. The unit had spent recent months providing security escorts for convoys moving materiel out of U.S. bases in Iraq. (Geoff Ziezulewicz/Stars and Stripes) 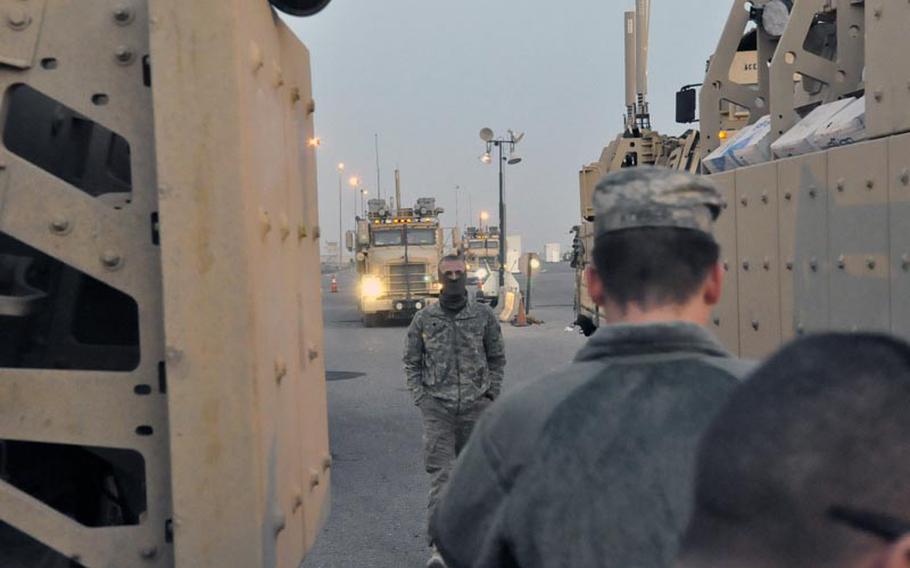 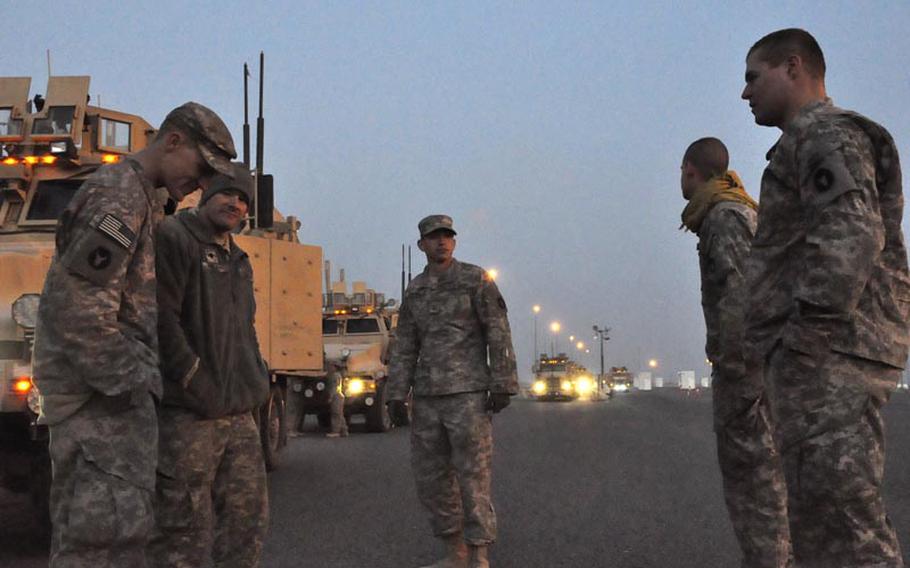 Buy Photo
Soldiers with the 1st Combined Arms Battalion, 194th Armor, hang out Saturday morning after crossing the Kuwaiti border from Iraq for the last time. Over the past few months, the unit has provided security escorts for convoys moving materiel out of Iraq as U.S. bases close down ahead of President Barack Obama&#39;s Dec. 31 withdrawal deadline. (Geoff Ziezulewicz/Stars and Stripes)

CAMP ECHO, Iraq &mdash; Army Reserve Sgt. Christopher Williams was there at the start, in 2003, when U.S. forces streamed north from Kuwait into Iraq after the &ldquo;shock and awe&rdquo; aerial bombardments in a race to secure Baghdad.

Nearly nine years and three tours later, now a reservist with the 206th Transportation Company, Williams is helping to wrap up the war, participating in one of America&rsquo;s last missions in Iraq.

&ldquo;It&rsquo;s historical for me,&rdquo; said Williams, of Mobile, Ala. He previously deployed to Balad, Ramadi and Fallujah, he said. &ldquo;I was here when it first jumped off, and now I&rsquo;m here closing everything.&rdquo;

While there might be a few more convoys out of Iraq, men and women like Williams have been trundling north from Kuwait to bring back the last remnants of America&rsquo;s war in Iraq since President Barack Obama announced a full withdrawal of troops by year&rsquo;s end on Oct. 21.

On Tuesday, the 206th and the Minnesota National Guard&rsquo;s 1st Combined Arms Battalion, 194th Armor, left Kuwait and headed out to Camp Echo, near the southern city of Diwaniyah, to escort out remaining gear before the base closed later in the week.

On arrival, they found soldiers too busy to note the significance of being the second-to-last base to close in Iraq.

The 1/194th has logged about a million miles on Iraqi roads since July, according to Company A commander Capt. Neal Schau.

&ldquo;We felt the pressure to get everything out,&rdquo; said Staff Sgt. Justin Goff, a convoy commander for the 1/194th&rsquo;s Company A.

As the deadline neared and bases continued to close, units such as the 206th and 1/194th crossed into Iraq more often; days and nights were long, boring and confusing, fueled by Rip-Its, cigarettes and chewing tobacco.

Although violence has decreased in Iraq since 2007, it was anyone&rsquo;s guess as to who might be out there in the night, looking for departing U.S. forces to try one last attack.

&ldquo;I&rsquo;d rather take the fight to the enemy than get hit by an IED,&rdquo; said Sgt. Joey Palmitessa of the 1-194th, a veteran of Ramadi during 2006 and 2007. &ldquo;Not knowing, driving up and down the road, who&rsquo;s going to get hit, that uncertainty &mdash; it could happen any second.&rdquo;

Early Saturday morning, these soldiers would man some of the last American convoys to leave the country.

Soldiers with the 1/194th had made the trip many times. Despite the risks, they had to go, even if they might be escorting empty trucks.

The history of the moment didn&rsquo;t seem to matter for many of the soldiers. It was another day, another job, another chance to get out of Iraq safely, one last time.

&ldquo;I don&rsquo;t see anything getting recognized anymore,&rdquo; said Sgt. Calvin Meyer, of Albertville, Minn., who had two brothers deploy to Iraq earlier in the war. &ldquo;The drawdown is here, get out of here.&rdquo;

Seven hours after crossing the border, the snake of trucks entered the outskirts of Diwaniyah. Camp Echo sits inside an Iraqi army base there, now nearly empty.

Surprisingly, the dwindling base still had most of its amenities. The gym remained open, as did the chow hall. Hot water and toilets were still functional.

At its peak, the base housed 2,600 soldiers, according to Maj. John Williams, executive officer for the 1st Battalion, 82nd Field Artillery Regiment &mdash; the unit in charge of shutting down Echo. By Friday morning, fewer than 500 remained.

The 1/82&rsquo;s command center had been moved under the hard roof of the chow hall, then the nerve center was condensed into the back of an MRAP.

Base closures have generally flowed north to south to keep medevac and other assistance assets intact as units move toward Kuwait, Williams said.

The 1/82 arrived with the rest of the 1st Cavalry Division&rsquo;s 1st Brigade about five months ago and has shipped out all types of equipment since then.

But much has also been left behind: a mass of housing units, latrine and shower trailers, generators, heaters, desks, light fixtures and other war detritus.

Just a few days earlier, there had been four U.S. bases in Iraq, Williams said.

Soldiers out of Echo were still patrolling Tuesday, but it became increasingly difficult.

It was nearing the time to go for Williams and the rest, and he said he took pride in the fact that the transition had been smooth.

&ldquo;This isn&rsquo;t Saigon, 1975, hanging off the Embassy,&rdquo; he said.

On Thursday, while grilling hot dogs, 1/194th soldiers were scolded by a base commander for not wearing eye protection. Soldiers were also warned that as the footprint shrank, they needed to reinforce the buddy system and be wary of kidnappings.

While nowhere near as common as they were earlier in the war, bombs were still being found on the road, 1st Brigade commander Col. Scott Efflandt said.

&ldquo;People ought to go home safely,&rdquo; he said. &ldquo;We are about 36 hours from keeping that promise.&rdquo;

&ldquo;The situation is going to get worse.&rdquo;

Just down the main base thoroughfare, a group of Iraqi workers milled about on Thursday afternoon, their final day on the base.

Omar, who asked that his last name not be used, is a native of Diwaniyah.

He was not looking forward to the U.S. soldiers rolling out.

&ldquo;I don&rsquo;t feel good about it,&rdquo; he said simply. &ldquo;The situation is going to get worse.&rdquo;

The Iraqi army and police will continue to be tested as violence once aimed at U.S. troops migrates toward the Iraqi government, Efflandt said.

&ldquo;It&rsquo;s certainly better than it&rsquo;s been in the last eight years, but there&rsquo;s another chapter to be written,&rdquo; he said.

Wade deployed to Iraq in 2007 and again in 2009 and 2010, and said he&rsquo;s seen improvement in the Iraqi army and police with each return. A former schoolteacher who joined up after the war began, Wade said forging a national identity will be key for the Iraqis going forward.

On Friday, another convoy of soldiers left Echo.

Whatever was left in the chow hall&rsquo;s freezers was served: chicken nuggets, some sort of cabbage and an assortment of slightly stale pastries. There was also an abundance of juice, milk and Gatorade.

Soldiers killed the day playing cards and hanging around, waiting for a sergeant major to appear and inspect the rooms they had crashed in since arriving Tuesday. A lieutenant colonel wandered the base, picking up any scrap of paper or cigarette butt he saw.

The crews headed out to their trucks as the sun went down, awaiting an 11:30 p.m. departure. Night fell, and the departure was pushed back an hour. Only a small fraction of the contracted semis driven up from Kuwait were carrying cargo.

They were among the last 1,000 U.S. troops still in Iraq, awaiting word that they could start heading out.

Palmitessa of the 1/194th was glad to see the security escort mission ending for his unit.

This deployment, though taxing, was too pedestrian.

&ldquo;It&rsquo;s not what I imagined,&rdquo; he said. &ldquo;I didn&rsquo;t expect to ride in a truck up and down (Main Supply Route) Tampa waiting to get hit. It makes my wife happy that it&rsquo;s boring.&rdquo;

&ldquo;In terms of finally getting it done, it&rsquo;s significant,&rdquo; Palmitessa said of the part his unit was playing in the war&rsquo;s end. &ldquo;But if it wasn&rsquo;t me, it&rsquo;d be someone else.&rdquo;

The ride back was largely uneventful.

After crossing through a simple metal gate at about 6 a.m. on Saturday, the soldiers were safe. They celebrated their final exit from Iraq, hugging and taking photos.

Sgt. Christopher Williams, who saw so much of the country through three previous deployments, stepped out of his truck into Kuwait&rsquo;s clear, cold desert air.

&ldquo;It&rsquo;s over with,&rdquo; he said quietly. &ldquo;A huge weight has been lifted off me.&rdquo;