At Camp Humphreys in South Korea on Friday, helicopter maintenance troops in desert tan uniforms salute during farewell ceremony held in their honor. About 30 soldiers of the Army&#39;s Company G, 194th Maintenance Battalion, 52nd Aviation Regiment, were set to depart for Iraq, where they are to perform helicopter maintenance duties. The soldiers are based at Camp Long in Korea. (Franklin Fisher / S&S)

At Camp Humphreys in South Korea on Friday, helicopter maintenance troops in desert tan uniforms salute during farewell ceremony held in their honor. About 30 soldiers of the Army&#39;s Company G, 194th Maintenance Battalion, 52nd Aviation Regiment, were set to depart for Iraq, where they are to perform helicopter maintenance duties. The soldiers are based at Camp Long in Korea. (Franklin Fisher / S&S) 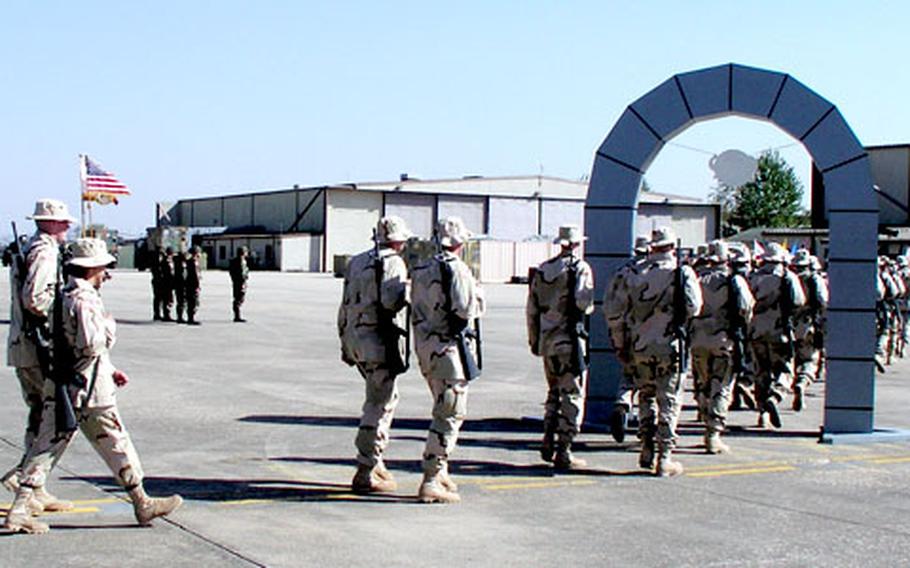 The troops from Company G, 194th Maintenance Battalion, 52nd Aviation Regiment at Camp Eagle were to fly out of South Korea on Monday.

The battalion, headquartered at Camp Humphreys, honored the deploying troops Friday with a farewell military ceremony on the long, windswept maintenance ramp outside the battalion&#8217;s Company C hangar.

Stars and Stripes agreed to a request by U.S. military officials that, for security reasons, this report not be published until after the detachment had left South Korea.

The 8th U.S. Army Band sent a busload of musicians to the ceremony, while a one-star general flew in to meet privately with the departing troops. A chaplain arrived with the general.

Shortly before the farewell ceremony, the detachment met in the hangar with Brig. Gen. Timothy P. McHale, commander of the 19th Theater Support Command in Taegu, and with Col. Richard Garrison, the 19th TSC chaplain.

During his ten or so minutes with the soldiers, McHale appeared relaxed, unassuming, not unlike a watchful, friendly uncle. Then Garrison, in a calm, quiet voice, drew on Joshua 1:9, the Old Testament passage in which God addresses Joshua: &#8220;Have not I commanded you? Be strong and courageous. Do not be afraid; do not be discouraged, for the Lord your God will be with you wherever you go.&#8221;

Garrison then invited the troops to bow their heads while he prayed for them.

&#8220;Lord God, thank you for the promise of your presence in our lives,&#8221; he said. &#8220;Be our strength when the body is weak; our courage when we face fear; our hope when our outlook fades; our light when darkness comes; our confidence when we are subject to discouragement. Empower us to complete our tasks proudly and return safely. Protect our loved ones and us.&#8221;

The group then went out into the cool, windy afternoon for the ceremony, which began shortly after 1 p.m. The deploying detachment marched under an &#8220;arch&#8221; that had been positioned at one end of the ramp. Dating to the Roman Empire, the arch ceremony has become a military tradition for troops departing for war, battalion officials said.

&#8220;We pay tribute to them today because they have been called to go in harm&#8217;s way. I tell you this though: These soldiers are prepared,&#8221; Elkins said. &#8220;Some of these soldiers are on their first tour of duty and several of them are combat veterans who have seen duty during Operations Desert Shield and Desert Storm, in Bosnia, Afghanistan and Iraq. Some soldiers have returned from Iraq as recently as April and June of this year.

The half-hour proceedings also featured a pass-in-review in which the detachment, already clad in desert tan uniforms, stood in formation as the rest of the battalion&#8217;s troops, in their usual green camouflage BDUs, marched past.

At the command &#8220;Eyes &#8212; Right!&#8221; each passing company turned heads smartly to the right, a traditional military salute, this time to the departing troops.

The troops learned last month that they&#8217;d be sent to Iraq. Weeks of rigorous field training followed. They were taught about roadside bombs and other improvised explosive devices (IEDs). They also went to a training range to learn how to handle themselves during convoys in Iraq and got tips about Iraq and its culture.

Also deploying is Sgt. Jorge De La Vega, 23, of Chicago, an Apache helicopter maintenance supervisor. Awaiting him in Stamford, Conn., are his wife and their 4-year-old daughter, Laila.

He&#8217;d just returned to South Korea last month from a mid-tour leave when a buddy gave him some news.