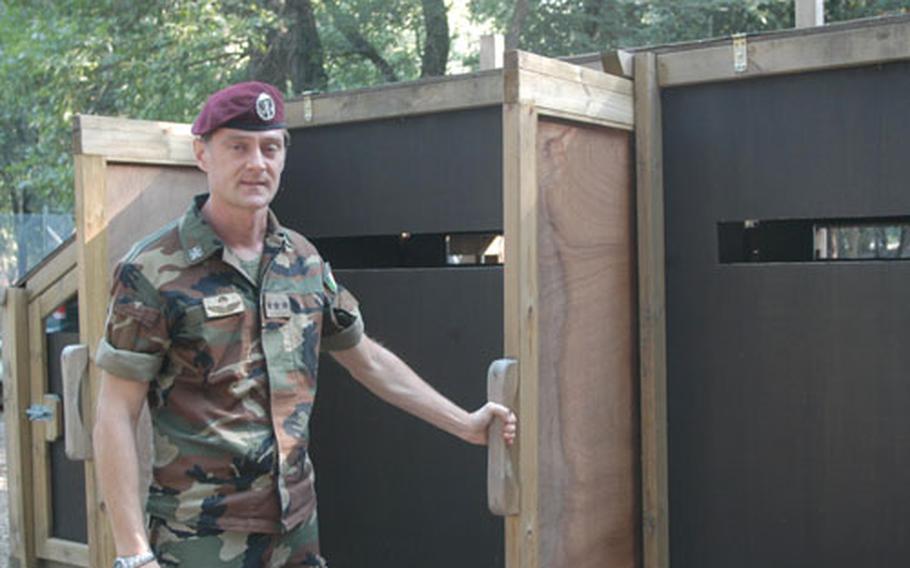 Capt. Paolo Biachesi, the deputy Italian base commander at Camp Darby, talks about a series of fences and gates that will be used to round up deer in the coming months. (Kent Harris / S&S)

CAMP DARBY, Italy &#8212; There are more local national employees working at Camp Darby than active-duty U.S. military personnel. But there are far more four-legged inhabitants than both human populations combined.

Thousands more. And, apparently, hundreds too many.

Capt. Paolo Biachesi, the Italian&#8217;s deputy base commander, said the last estimate put the number of deer on the base &#8212; part of a national park &#8212; at about 4,000. The most densely forested part of the base, which is fenced off from the parts where most human inhabitants roam, is used by the military to store munitions.

The deer can&#8217;t go anywhere because the storage area is surrounded by a sturdy perimeter fence. And Biachesi says there are seemingly more of them all the time. The deer &#8212; chervi in Italian &#8212; can breed as often as four times a year.

Due partly to a dry summer last year that limited vegetation growth and partly to the growing number of deer, the animals have largely eaten themselves out of a home.

&#8220;They ate everything they&#8217;re capable of eating,&#8221; Biachesi says, pointing to a lack of undergrowth throughout the forested area. &#8220;They&#8217;ve stretched high to eat all the leaves on the trees they can reach and cleared away all the edible weeds and bushes. The only greenery left on the ground is poisonous vegetation.&#8221;

Realizing the problem, base personnel started feeding them last year. But that&#8217;s only a temporary solution.

So the plan is to use a system of fences and gates to corral hundreds of animals starting in November. They&#8217;ll then be transported to other areas of Italy.

Base officials say there&#8217;s been no discussion on hunting the animals because that isn&#8217;t allowed in a national forest. Some of the animals may eventually be hunted after they&#8217;re transported to other areas.

Biachesi says the goal is to try to relocate a few hundred each month until the spring, when they start breeding in earnest. Trying to corral them then would probably prove fatal to some of the animals. Male deer could kill themselves trying to reach the females on the other side of the fencing.

The relocation may have to become an annual event. Biachesi says that deer were introduced into the park in the 1980s as an experiment. With no predators inside &#8212; wild boars and large turtles are among the other inhabitants inside the fences &#8212; the population boomed. The last major roundup was in 1999.

Those staying at the base campground or the roughly 300 Army and Air Force troops assigned to Camp Darby can often catch glimpses of the deer through the 13-foot-high fences that separate the areas. But it only takes a few minutes of driving inside the restricted area to realize how many of the deer there are.

Trying to get a picture of them is difficult, though. They&#8217;re not wild about humans or the vehicles they drive.

Roberto Baldeschi, a local national who works for the base&#8217;s department of public works, is one of those who feeds them on a regular basis. He said the deer are desperate enough for food that they come close to him while he&#8217;s setting out the stacks of hay.

He said he hasn&#8217;t seen any deer that have died from starvation, but it&#8217;s obvious that some are suffering. He&#8217;s told by experts that the males will sometimes go weeks without eating when the food supply is short.

An abundance of deer is actually good news for the base on one front. The lack of undergrowth lessens the likelihood of fire. But that&#8217;s still enough of a concern that a helicopter owned by the regional government now has a special landing spot on base where it can venture over the forested area and look for trouble.

Officials say there will still be more than enough deer left after the relocations to keep the undergrowth to a minimum.