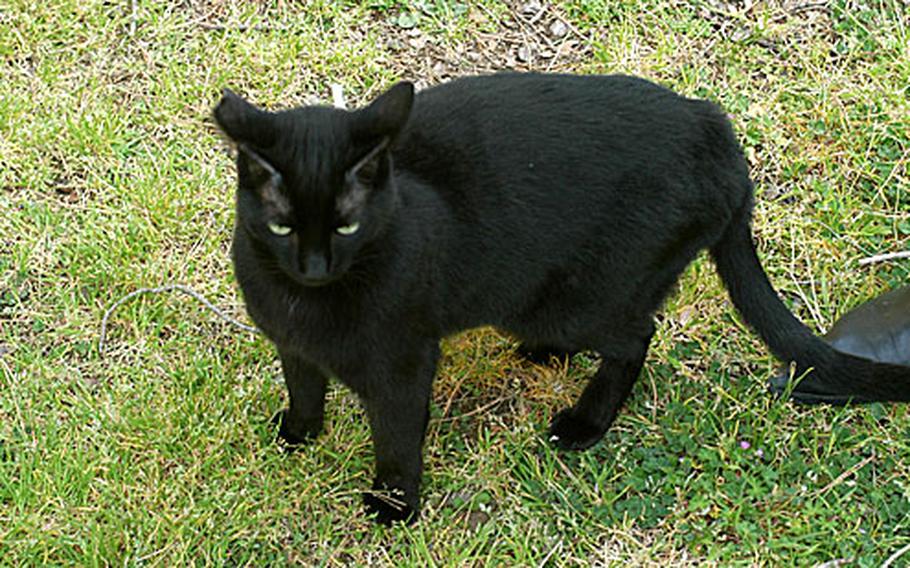 Percy, a black cat that shies away from most strangers at Camp Darby, Italy, has had the good luck to find a home in one of the colonies set up around the base. The base&#39;s cat population, once out of control, is now fairly steady thanks to volunteers and the work of the Darby Animal Welfare Association. (Kent Harris / S&S)

CAMP DARBY, Italy &#8212; Wild animals have been living in and around this small logistics base far longer than Americans.

Camp Darby is a sprawling area of Italian national forest, surrounded by chain-link fence and barbed wire. Deer, wild boars, hedgehogs, foxes, squirrels and assorted birds live inside that perimeter and are protected by law. But over the years other animals not indigenous to the area &#8212; cats and dogs &#8212; started calling the base home.

Valerie Bartlett, vice president of the Darby Animal Welfare Association, said there were hundreds of cats roaming around at the start of the new millennium, shortly after the group was founded.

Patrizia McCammon, the base&#8217;s chief of administrative services, who has lived in the area all her life, said sometimes the cats were shot. &#8220;Thank God the Italians never heard about that,&#8221; she said. &#8220;Because there would have been a huge scandal.&#8221;

Italian pet owners are part of the problem, though, not just Americans who head back to the States and leave pets behind. Italy requires computerized chips in dogs that can be used to locate owners. But that&#8217;s not the case with cats. And though it&#8217;s against Italian law to abandon pets &#8212; with owners facing stiff fines &#8212; animals keep turning up at Darby, Bartlett said.

The association&#8217;s approach of trapping cats and then getting them spayed or neutered by a local veterinarian appears to be working. McCammon and Bartlett estimate Darby&#8217;s current feline population at 60. Most are registered with local authorities and live in nine colonies set up around the installation.

Volunteers such as McCammon run the colonies, putting out bowls of water and dry cat food.

Bartlett said there are three types of felines on base: domesticated (recently abandoned cats), wild and feral. The wild cats were former pets. The feral cats have never been owned by humans and most often come from the litters of wild cats.

The agency&#8217;s catch, snip and release program has largely eliminated new litters on base.

That&#8217;s also the case with dogs that occasionally turn up. Most of them show up at the front gate &#8212; without identification &#8212; Bartlett said. At least one has been reunited with an Italian owner because of the chip it carried.

Dogs, which once roamed in packs in the fenced-off forest area a decade or two ago, aren&#8217;t released back on base. They&#8217;re given to local shelters, whose staffs try to find homes for them, or Americans on base are asked to adopt them.

The base population has been generous in recent years with donations that allow the association to purchase cat food and pay some of the veterinarian costs.