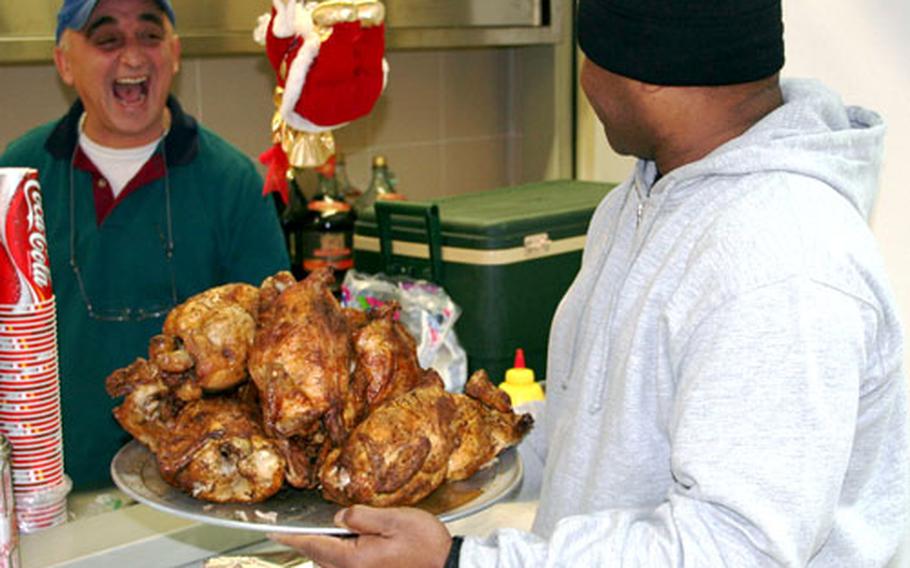 After months of not having many dining options on base, soldiers and airmen assigned to Camp Darby now have another spot to eat lunch and dinner. And they&#8217;ll soon get yet another.

Burger King, the only AAFES-run outlet on base, closed in October. It had been open only a few hours a day, leaving the Italian dining facility as the main option for those looking for prepared meals. There are no other businesses within an easy walk from the base.

But Kostas&#8217;s &#8212; a &#8217;50s-themed restaurant serving Greek and American cuisine &#8212; opened earlier this month in the renovated bowling center. It has a menu featuring gyros and shish kebabs as well as American-style pizza, hamburgers, grilled chicken and salads.

The operators are Eleftherius and Rosa Kostas, who have been serving food at various businesses in Aviano, Vicenza and Camp Darby for more than two decades. Eleftherius Kostas, originally from Athens, Greece, most recently operated a stand at the American Beach last year.

The Army and Air Force Exchange Service plans to award a contract to another business to operate in the facility formerly used by Burger King in the near future.

Gino Rakas, services manager for AAFES in Italy, said a contract should be awarded by the end of the year to a vendor who will offer a greater variety of foods than Burger King provided. He said in an e-mail that there wasn&#8217;t enough business to support the hamburger chain at one of the smaller American military facilities in Europe.

The Army and Air Force combine to have fewer than 300 servicemembers stationed at the base between Pisa and Livorno. A handful of Navy personnel are also stationed there. Thousands of military ID cardholders throughout Europe visit the base every year, especially to use the campground and beach in the summer.

Rakas said the new business should be open six days a week and specialize in breakfast and lunch.

In the meantime, Kostas&#8217;s is open for lunch and dinner six days a week and Sunday afternoons and evenings. It features a jukebox in addition to the sound of balls knocking down pins nearby.