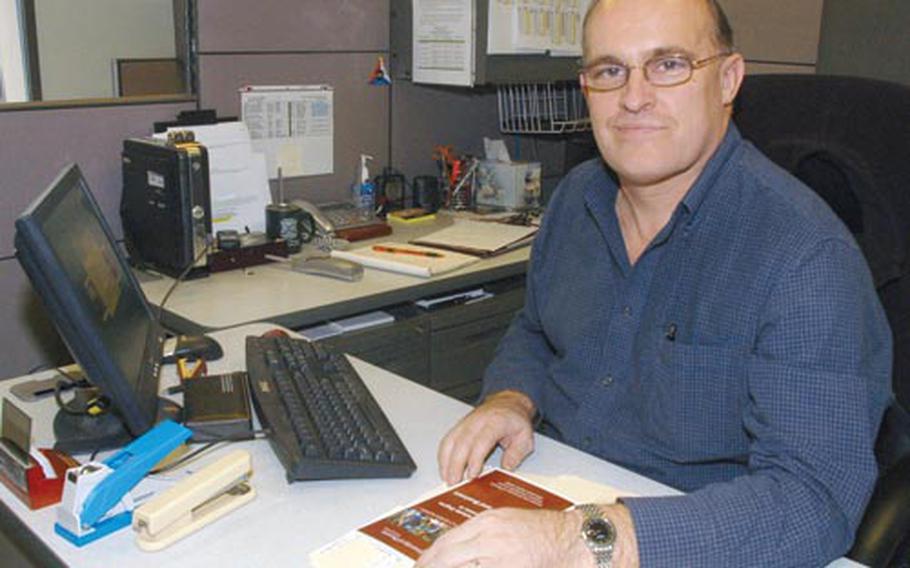 Charles Davis coordinated the University of Phoenix master of business administration program at Camp Casey after several people at the base asked for the program. In January, the graduate degree program will be the first ever offered at the base. (Erik Slavin / S&S)

CAMP RED CLOUD, South Korea &#8212; Since the signing of the Korean War armistice, the bases north of Seoul within U.S. Army Garrison-Red Cloud have been recognized as a valuable first line of defense.

Few have ever touted the garrison &#8212; the formerly called Area I, which stretches along growing cities and acres of rice paddies up to the Demilitarized Zone &#8212; as an oasis of amenities and opportunities outside of work.

While it will never be Disneyland, or even Fort Campbell, commanders have made attempts in recent years at improving quality of life and educational opportunities.

After a concerted effort by several employees within the garrison, the University of Phoenix agreed to establish an 18-month master of business administration program.

"There has been a lot of interest since July about an MBA program in Area I," said Charles Davis, the university&#8217;s program coordinator in the Pacific Asian theater. "The university felt like it was a viable option at Camp Casey."

Gloria Prince, prevention coordinator for the garrison&#8217;s Army Substance Abuse Program, will be one of the first students and helped push for the program.

"We dreamed it, we prayed for it, and we got it," Prince said. "This is the first program of its kind here, and we&#8217;re all really excited." The program allows students to make up work if they are deployed on orders or must attend field exercises.

The flexibility helps, but many students at various programs available within South Korea will still face an early morning of physical training, followed by normal duty, followed potentially by reading multiple chapters and then writing a term paper.

While online courses or the new University of Phoenix program takes travel out of the equation, other students who travel to Yongsan Garrison &#8212; or in some cases, south of Seoul to Osan Air Base &#8212; must factor in three to four hours of round-trip travel. Because most garrison servicemembers are not allowed to own a vehicle, they must make that trip on a bus.

Second Lt. Corey Taylor, of the 302nd Brigade Support Battalion&#8217;s Company A, said he&#8217;ll just have to deal with those challenges.

Inspired by his mother&#8217;s work as a nurse and a lack of quality care available in the New Orleans area, he hopes one day to open an elderly care facility there.

Keeping in mind that his mission comes first, Taylor said, his command supports his academic aspirations. It helps that his commander is also enrolled in graduate courses, Taylor said.

"I&#8217;m going into it knowing the time constraints and the demands it&#8217;s going to take," Taylor said. "But it&#8217;s a goal I want to achieve, even if it means working long hours and studying long nights."

The University of Phoenix will hold classes for its master of business administration course from 6 to 10 p.m. Thursdays at the Camp Casey Educational Center, beginning in January.

Each three-credit course costs $890, which includes a $95 course materials fee.

Servicemembers receiving tuition assistance receive up to $750 for each course. Enrollment requires a bachelor&#8217;s degree.

The degree plan does away with graduate entrance examinations, letters of reference and other hurdles involved in most graduate programs.

Students won&#8217;t be required to submit a thesis or take a comprehensive test. For information, contact Charles Davis at DSN: 723-7807.