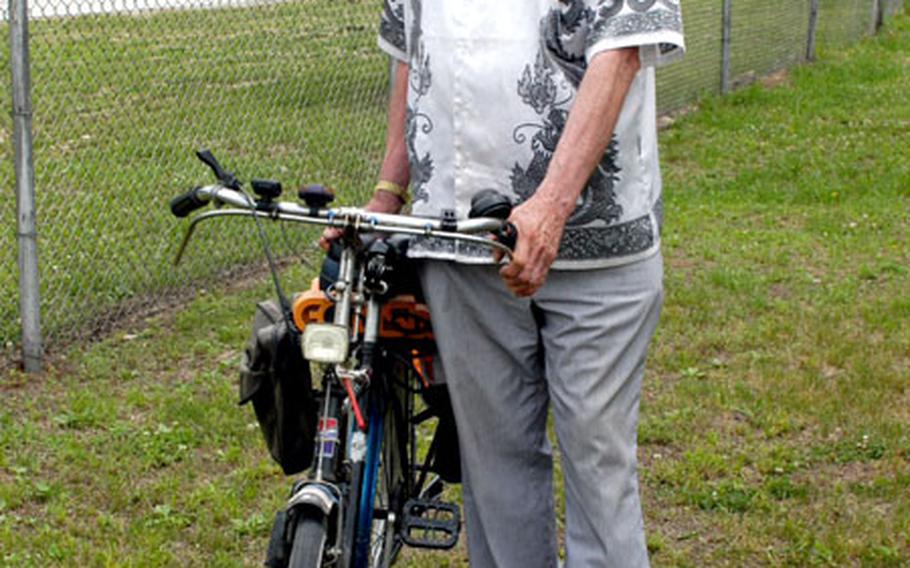 CAMP CASEY, South Korea &#8212; It is easy to spot Tongduchoen Veterans of Foreign Wars manager Jack Blume &#8212; just look for the 76-year-old guy wearing a pair of earrings and riding a beat up bicycle around Camp Casey.

The former U.S. Marine staff sergeant and Air Force airman said he changes earrings as often as he changes clothes. On Thursday, he wore a pair of gold earrings &#8212; one bought outside Camp Casey&#8217;s front gate and the other purchased on a recent trip to the Philippines.

The Florida-born, New York-raised veteran acquired his first earring after he retired from the military and came to work as a contractor in South Korea in 1977. He has been here ever since.

Most evenings Blume heads to the Tongduchoen VFW club, which he helped found in 1980s, and spends his free time shooting the breeze with other veterans and young soldiers.

He has plenty of stories to share about his experiences as a Marine during the Korean and Vietnam wars.

One story he shares is how in Vietnam the enemy would use cans of water, with holes in the bottom, to fire rockets into his base. When the water drained completely from the can, he said, the rocket would fire. But when heavy rains fell, the cans wouldn&#8217;t drain completely.

As VFW manager Blume helps organize charity events such as barbecues at local orphanages, he said.

The base has changed a lot in the almost 30 years he has been there. In the 1970s it was mostly Quonset Huts and tents, he said, and Huey helicopters flew in and out daily.

There were almost as many nightclubs outside the front gate as there are now, but the roads were unpaved and beer cost about 6-cents a bottle, compared to the $3 soldiers pay today.

Even though, as a contractor, he can own his own vehicle, Blume prefers to travel on a bicycle. So far he has worn out four bicycles in South Korea; his latest is five years old.

Blume&#8217;s wife died in 1968. He stays in touch with their five adult children but said he has no plans to remarry or return to the States.

He reads the obituaries in the Army and Air Force Times and sees many old friends who pass away within 10 years of retiring, so he is in no hurry to leave his job. However, when he does retire he plans to move to the Philippines, he said.