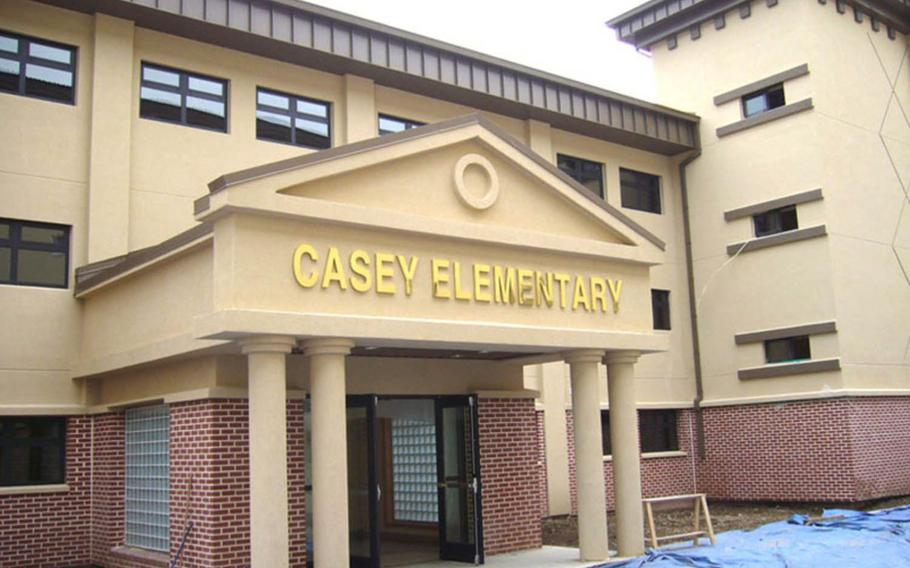 An Installation Management Command memo dated Jan. 28, 2016, and sent to the parents of children stationed at U.S. facilities north of the South Korean capital says Camp Casey Elementary School will close in June and Child and Youth Services will end at the base July 1, 2016. (Courtesy of DODEA)

Camp Casey’s elementary school and child development center will close this summer as U.S. forces on the Korean Peninsula relocate to Camp Humphreys.

An Installation Management Command memo, dated Jan. 28 and addressed to the parents of children stationed at U.S. facilities north of Seoul, says Camp Casey Elementary School will close in June and Child and Youth Services will end at the base July 1.

“In accordance with the 2002 Land Partnership Plan (amended in 2004), Area I is reducing in U.S. population and bases,” Col. Jack Haefner, U.S. Army Garrison Camp Red Cloud and Area I commander, said in the memo.

Camp Casey’s Department of Defense Education Activity school opened in 2010 with an enrollment of about 250 as part of U.S. Forces Korea’s plan to increase the number of command-sponsored slots on the peninsula. A new wing opened in 2011, nearly doubling the K-8 school’s capacity. However, enrollment has declined over the past year.

The Army hasn’t sponsored soldiers to bring their families to Camp Casey since February 2014, Haefner said, and parents of young children still at the base after the facilities close should plan for other means to care for them.

“Since 2011, the Installation Management Command is proud to have provided high-caliber care for children in Area I,” he added.

DODEA officials were unavailable Friday to comment on the closure.

However, Charly Hoff, a DODEA spokesman, said last year that the few DODEA-eligible families who remain in Area I after the facilities close would “need to explore education options through the Non-DOD Schools Program,” which provides education options for authorized command-sponsored students living overseas in locations where DODEA schools are not available.

Military schools in Seoul are likely to remain open through the 2016-17 school year, Hoff said.

Camp Humphreys, south of Seoul, has been the site of a massive expansion project in preparation for the reallocation there of most U.S. forces in Korea.