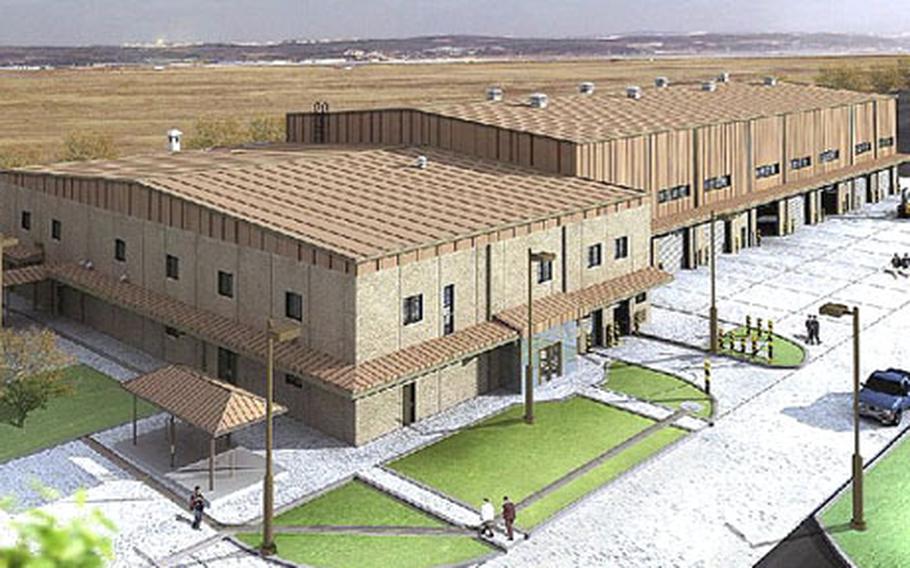 Artist’s rendering of the new $9.7 million maintenance facility to be built at Camp Carroll in South Korea. The state-of-the-art structure will allow workers to pull maintenance on as many as 36 tanks or other vehicles at one time, rather than the six they can maintain at once in an existing facility. It’s slated for completion in November 2007. (Courtesy of the U.S. Army)

PYEONGTAEK, South Korea &#8212; The U.S. Army is building a vehicle maintenance facility at Camp Carroll that will greatly boost its ability to keep a heavy brigade combat team&#8217;s tanks and other vehicles ready for battle, officials said Monday.

The battalion maintains the heavy-brigade-sized set of pre-positioned vehicles, spare parts and medical supplies that are kept ready at Camp Carroll in case of war or other contingency. The set is known within the U.S. military in South Korea as &#8220;APS-4.&#8221;

The $9.7 million project calls for a 53,000-square-foot state-of-the-art facility that will house 16 vehicle maintenance bays equipped with floor-mounted hydraulic lifts, automatic lube systems and a crane system that can lift up to 35 tons of vehicle parts.

Work began last week and is to finish in November 2007.

Currently, the battalion&#8217;s workforce of Korean national employees does maintenance on APS-4 vehicles inside a six-bay, 70,000-square-foot warehouse.

&#8220;It also gives us back approximately 70,000 square feet of storage space,&#8221; he said, because once the new facility opens, the warehouse will cease its role as a repair facility.

The new facility&#8217;s administrative areas will include training rooms for the workforce. Those same areas can house incoming tactical units that come in to draw APS-4 equipment in wartime or other contingency.

The facility&#8217;s office area will be wired for both secure and non-secure communications.

Other features are to include a large break area, a latrine area with lockers and showers, a weapons storage vault, centralized tire shop, supply and communication rooms, and storage areas.

The Namwha Construction Company Ltd. is to perform the work under contract with the U.S. Army Corps of Engineers.

Officials Wednesday afternoon were to hold a groundbreaking ceremony at Camp Carroll to mark the start of the project.