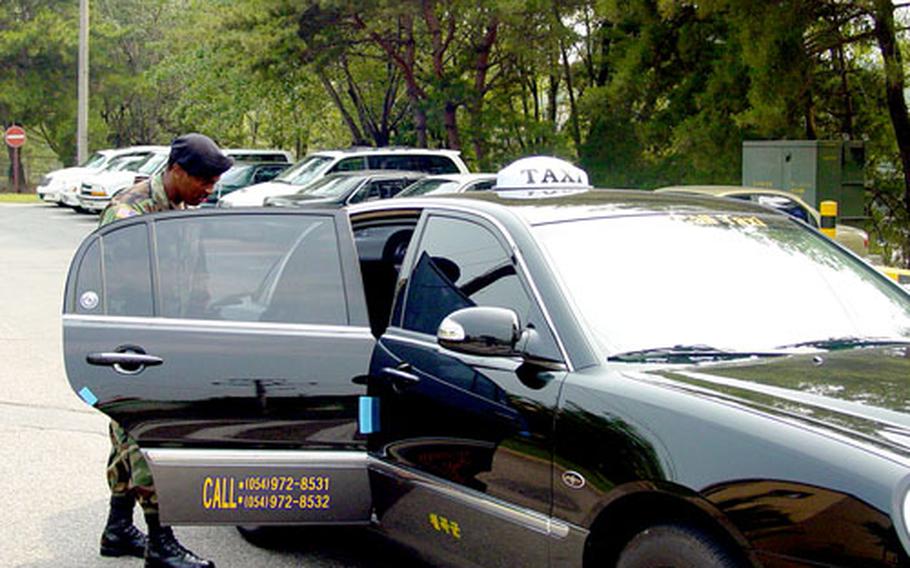 The next time troops at Camp Carroll in South Korea need a taxi, they won&#8217;t have to try to get one by calling a driver&#8217;s cellular phone and hoping he&#8217;s not too busy to pick them up.

Instead, soldiers at the big logistics depot in Waegwan now can turn to a taxi service formed exclusively to serve Camp Carroll.

The service began earlier this month under a June 7 written agreement between the Army&#8217;s Area IV Support Activity and the governor of Chilgok County, of which Waegwan is a part.

Under the old plan, Pak said, soldiers would call the taxi drivers directly.

Sometimes, Pak said, the drivers would disregard the calls.

Also, allegations were made that drivers overcharged soldiers, Pak said.

Taegu, South Korea&#8217;s third-largest city, is about a half-hour south of Waegwan.

It consists of five drivers, each with a cab, and an English-speaking dispatcher to answer the phone, officials said.

Officials also have set aside parking spaces for taxis, two each at the post exchange and commissary.

Calling a taxi from inside Camp Carroll carries no pick-up fee but calling one from off-post costs 1,000 won extra (about $1.00).

The new service is especially helpful at a post such as Camp Carroll, Plumley said, in part because of recent rules that forbid noncommissioned officers in pay grades E-5 and E-6 from driving private cars.