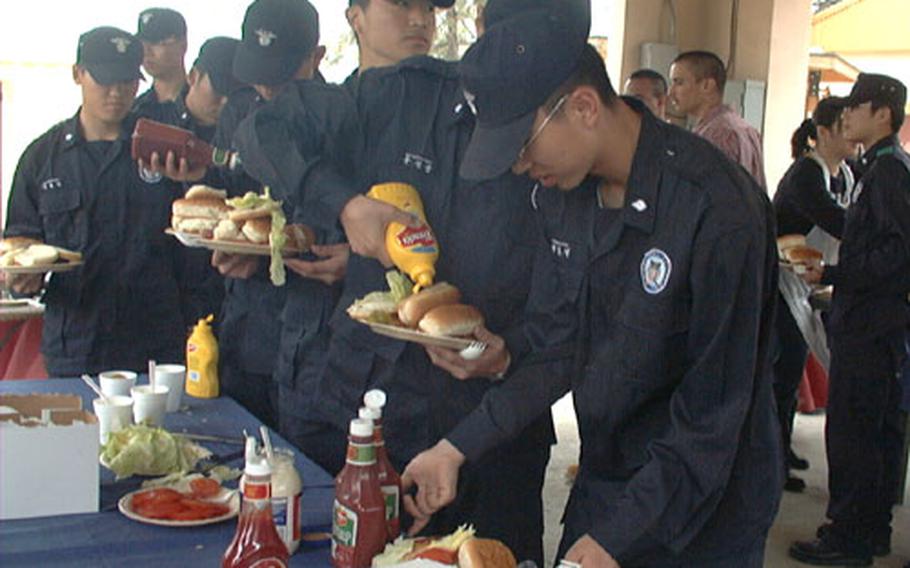 Officers of Korean National Police ready their plates at a cookout on the U.S. Army&#39;s Camp Carroll in Waegwan, South Korea. The Army hosted a day of appreciation for the KNPs, who have frequently stood guard outside Camp Carroll and other U.S. installations during anti-U.S. demonstrations and other situations. (Franklin Fisher / S&S)

WAEGWAN, South Korea &#8212; One frigid winter night, soldiers at a sprawling U.S. logistics base here lay safe asleep in the warmth of their barracks.

Outside the gates and on the perimeter of 681-acre Camp Carroll, Cpl. Han Ki-baek and other blue-clad young officers of the Korean National Police stood watch.

KNP buses have rolled onto the U.S. installations often since the terror attacks of Sept. 11, 2001, and in response to protests after last year&#8217;s roadside accident when two South Korean schoolgirls were struck and killed by a U.S. military vehicle.

To express its thanks for the KNP&#8217;s security efforts, the Army at Camp Carroll held a day of appreciation Friday for the KNP units from northern Kyongsang Province. It&#8217;s part of a broad new &#8220;Good Neighbor&#8221; initiative by the U.S. military to make friends among the South Korean public.

The KNP officers toured parts of the Materiel Support Center-Korea&#8217;s facilities on post, including warehouses and compounds that store tanks and other combat equipment.

Like members of South Korea&#8217;s military, KNP officers are conscripted for two years of service. Most of the event&#8217;s participants were in their early 20s, the same age as the 25 U.S. soldiers who volunteered to spend the day with their South Korean guests.

Whenever the Americans and the KNPs talked, there were a lot of easy smiles, even though some of the KNPs have mixed feelings about guarding U.S. installations against fellow Koreans.

KNP Sgt. Kim Sang-hon, 23, recalls a remark one Korean leveled at him on the day of a peaceful demonstration outside Camp Carroll not long ago.

&#8220;&#8216;Why are you protecting the Americans?&#8217;&#8221; he said he was asked. Kim answered that it came with KNP duty. Indeed, over certain issues, his sympathies have sometimes been with the demonstrators.

But then he talked with some of the U.S. soldiers who were along for the day.

He was pleased by the number of Korean workers he saw around the post, which employs 1,500 South Koreans.

Not all KNP officers have misgivings. KNP Sgt. Pak Jae-hyun, 23, thinks the American military presence is good for South Korea, and wants to do his part to &#8220;prevent&#8221; growing anti-Americanism among some in his country.

Army Pfc. Andres DeJesus, 26, an artilleryman with the 1st Infantry Division at Fort Riley, Kan., is on deployment in South Korea with others from his battery. He and some of his buddies spent a good part of the cookout chatting amiably with their KNP guests.

Sgt. William Rippey, 23, is stationed at Camp Carroll with the 20th Support Group. He, too, volunteered and was playing basketball with some of the KNPs.

The Army&#8217;s top officer at Camp Caroll offered a formal thanks to the KNP units at a brief ceremony in the gymnasium.

&#8220;Your support has been nonwavering,&#8221; said Army Col. Kevin M. Smith, MSC-K&#8217;s commander. &#8220;Everything that we have asked in the way of KNP support has been provided to the very best level of your abilities, and we want to take time out to thank you both personally and professionally.&#8221;

&#8220;In sun, rain, snow, and cold chill of winter, you have been there for Camp Carroll, as a visual and active deterrent to those who might mean to do us harm.&#8221;

The Army then presented a wooden plaque of appreciation to the commander of the KNP company stationed in Kumi City, about 15 miles north of Waegwan. Six other plaques were given for distribution to other KNP companies in the region.