Camp Buehring a final tune-up for troops headed to Iraq 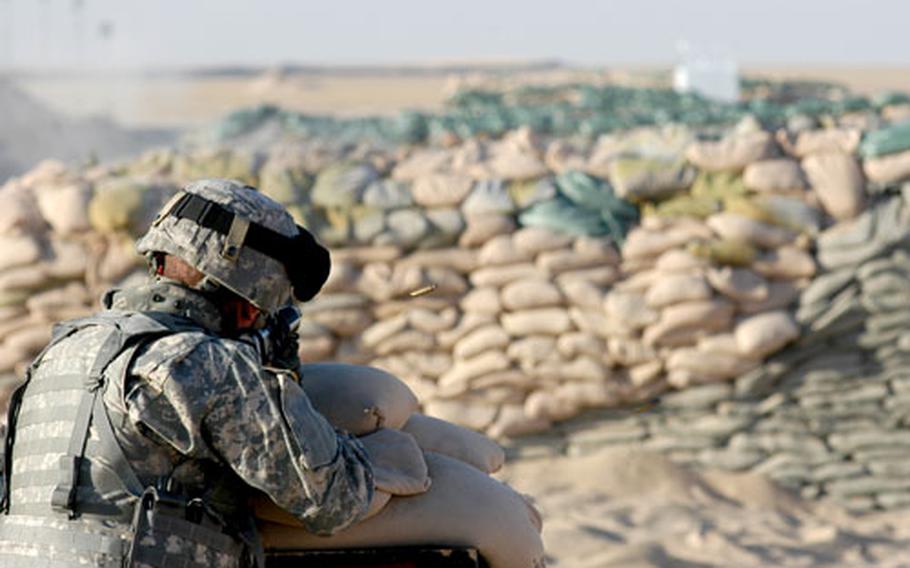 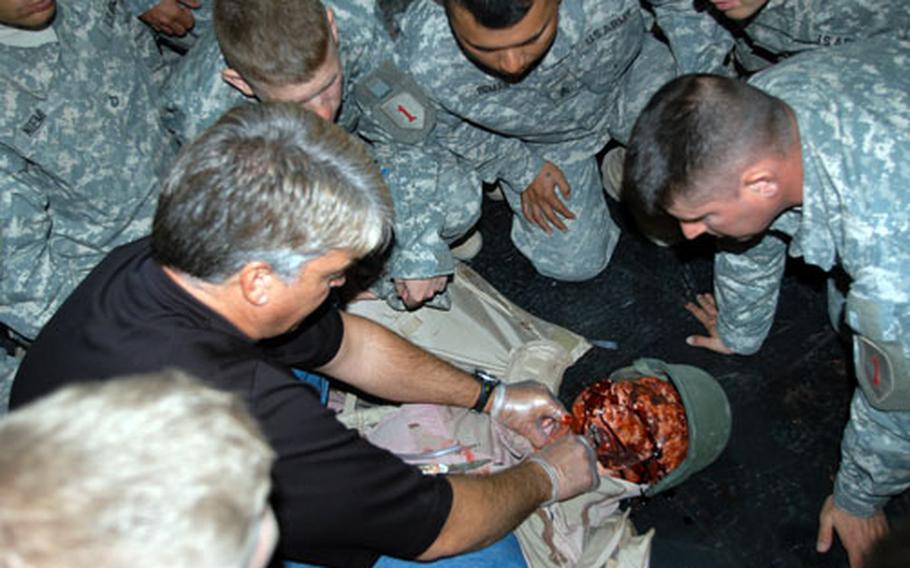 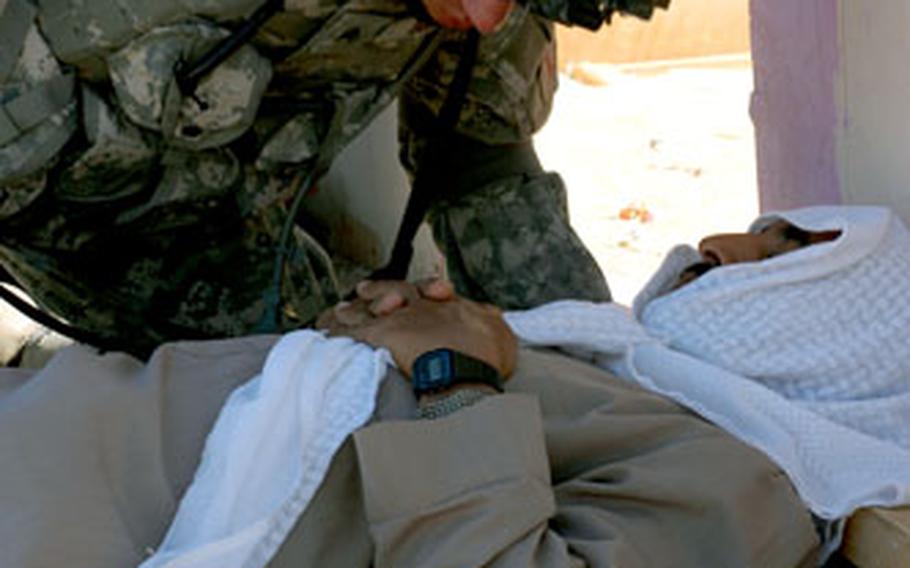 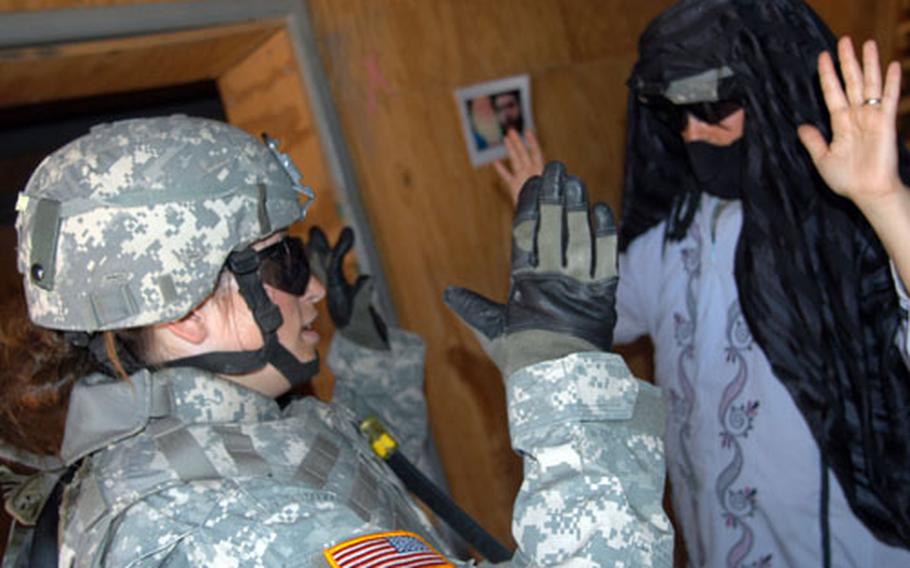 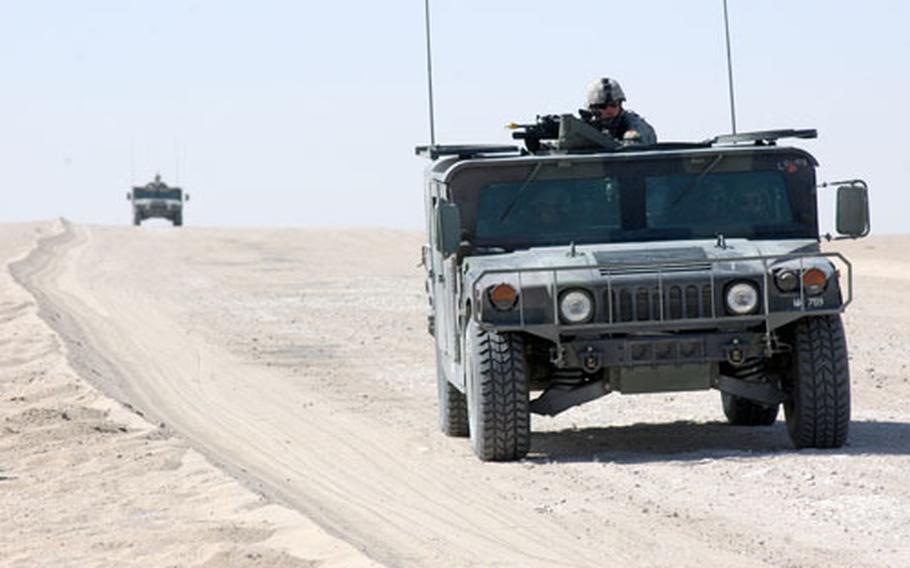 Soldiers with the 9th Engineer Battalion, based in Schweinfurt, Germany, convoy through the desert as part of a reconnaissance and clearance drill in northwestern Kuwait. (Jennifer H. Svan / S&S)

UDAIRI, Kuwait &#8212; The convoy has been inching down this hot, dusty stretch of sand flattened into a road for hours.

The pace for the Army engineers of Company C, 9th Engineer Battalion from Schweinfurt, Germany, is slow and deliberate. Every few minutes, they stop. This time, &#8220;a mound of dirt in the traffic circle looks out of place,&#8221; a soldier tells command-and-control.

Hairston pulls his Humvee off to the side to watch the action &#8212; or lack thereof &#8212; unfold on this training route at the Kuwait Armed Forces Training Center.

Another soldier radios, &#8220;I spotted some wires coming out of the trunk of a parked car,&#8221; bringing the convoy to a halt. Hairston waves them on with an all-clear.

The engineers are rehearsing for Iraq, where their job will be to clear roads of bombs &#8212; or any potential danger or obstruction that could disrupt a supply convoy.

Eat, sleep and trainEven in peaceful northern Kuwait, where camels and sheep graze on tan desert grass, every piece of debris looks suspicious to the GIs. &#8220;Trash bag buried in the berm,&#8221; is called in next.

Hairston, a contractor with Military Professional Resources, knows where the authentic-looking but pretend roadside bombs are planted. And yes, he said, there are a few intended as a ruse. He&#8217;s there to observe whether the soldiers find the real ones and how they respond; and also to tell them when a piece of trash or a Meals, Ready to Eat box stuffed with dirt is just that.

The engineers spend about three hours on the route reconnaissance and clearance drill, calling in bombs and snipers, shooting at a suspicious vehicle with blanks, and stopping at several cookie-cutter villages along the way where Arabic-speaking role players peek from windows.

For GIs deploying to Iraq, the Kuwait Armed Forces Training Center is the last stop before &#8220;crossing the berm&#8221; into Iraq about 12 miles north. They sleep, eat and exercise at Camp Buehring for the two- to three-week homestretch. The rest of the time is spent sharpening their skills and adopting the warrior mind-set at the camp&#8217;s training village and outlying Udairi Range.

&#8220;The most important thing that they get here is an opportunity to get their minds straight and realize, &#8216;Hey, we&#8217;re not back in the States anymore. This is real now,&#8217;&#8221; said Maj. Kenneth D. Smith, operations officer for Camp Buehring and the training center.

&#8216;CSI: Iraq&#8217;In the camp&#8217;s training village, maneuver units are combining tactics and detective work. The Military Operations in Urban Terrain &#8212; or MOUT &#8212; site includes five houses wired with pop-up targets and sound effects of a crying baby, a man and woman shouting in Arabic, and loud music. Soldiers can shoot simulated rounds that sting like paint balls. Video cameras record the action in each room, so units can review afterward.

The 1st Infantry Division&#8217;s 2nd Brigade Combat Team from Schweinfurt was trying to push about 35 platoons through the MOUT in three weeks, said Capt. Raven Bukowski, the brigade&#8217;s assistant intelligence officer. Five of the brigade&#8217;s Arabic-speaking soldiers were to be integrated into each drill, either as linguists or role players.

The scenario: A maker of roadside bombs and a terrorist financier are living in the same village. While securing rooms and rooting out weapons, the soldiers must use their interpreter to ask questions and gather papers and photographs for intelligence analysts.

Lumping interrogation and gathering evidence on top of room-clearing, cordoning and other urban tactics, &#8220;is an exhausting process for these guys,&#8221; said 2nd BCT legal officer Capt. Zahid Quraishi. But the soldiers are often forced into roles that are critical to the eventual prosecution of detainees, he said.

&#8220;It&#8217;s been a problem with detainees being released &#8230; because pictures taken were not sufficient; sworn statements were not detailed enough; the evidence package was incomplete,&#8221; Quraishi said.

Commanders can choose relevant training for their units

The U.S. military has been training at Udairi for more than 10 years, with operations expanding in 2003 when the military began staging for the invasion of Iraq.

The names have changed: The Kuwait Armed Forces Training Center is the new name for the former Udairi Range Complex. And in 2004, Camp Udairi was renamed Camp Buehring in honor of Army Lt. Col. Charles H. &#8220;Chad&#8221; Buehring, who was killed Oct. 26, 2003, when an insurgent&#8217;s rocket struck his 11th floor room at the Al Rasheed Hotel in Baghdad.

The camp can sleep more than 30,000 soldiers, and can accommodate a surge of more than 40,000. More than 25,000 soldiers are expected to transition through the camp in the next month, military officials said.

Some training is mandatory, such as small-arms and aviation- desert-landing familiarization, but most is optional, with commanders choosing courses for their units.

The training leaders are mostly retired or former military, now working as contractors.

Cloud&#8217;s tools are computer-driven mannequins that ooze blood and gasp for air, two life-size dummies in torn pink-stained fatigues. One has a leg missing below the knee, the other a face that is not all there. As Cloud crouches on the floor to demonstrate first aid, a soldier nearly faints. The class moves right along to cutting a hole in a rubber trachea.

&#8220;Might as well get used to it during training rather than on the battlefield,&#8221; shrugged Spc. Janice Johnson, 28, a prescribed load list specialist with 264th Combat Support Battalion, 18th Airborne Corps from Fort Bragg, N.C.