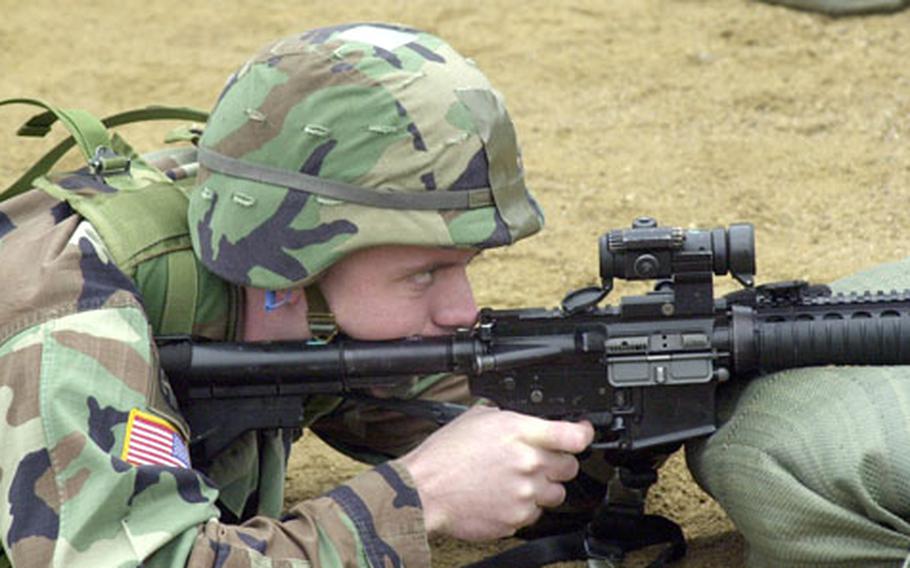 Capt. Henry Moltz lines up a shot with his M-4 rifle during range qualifications at Camp Bonifas, a minute or two away from the Demilitarized Zone. (Erik Slavin / S&S)

Capt. Henry Moltz lines up a shot with his M-4 rifle during range qualifications at Camp Bonifas, a minute or two away from the Demilitarized Zone. (Erik Slavin / S&S) 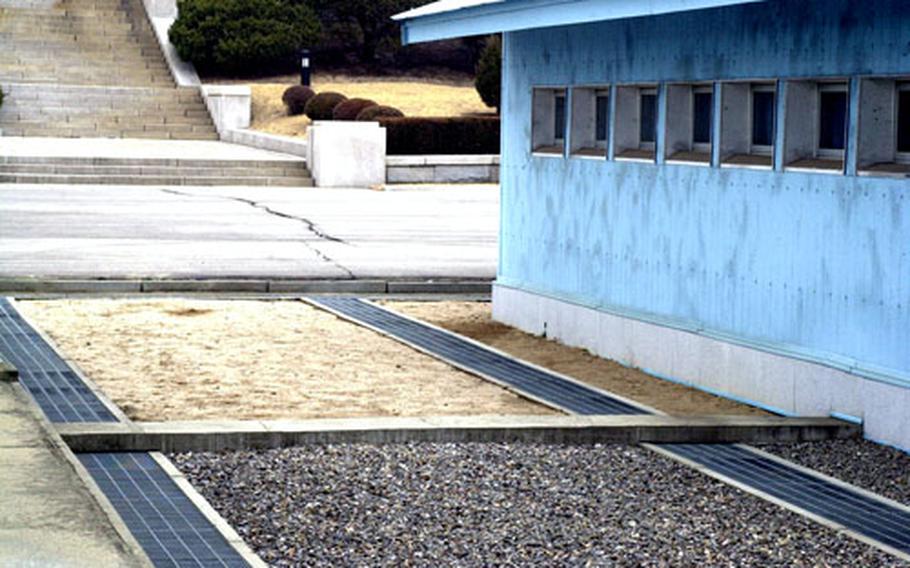 The concrete line in the center is all that separates South and Korea at the United Nations-administered Joint Security area. (Erik Slavin / S&S)

CAMP BONIFAS, South Korea &#8212; This is where a U.S. soldier gets up in the morning, stares at his enemy amid a technical state of war and considers it a victory if he doesn&#8217;t fire his weapon.

It is a war zone littered with minefields and 160,000 yearly tourists.

It&#8217;s also where 38 soldiers with the 8th Army and under the United Nations Command Security Battalion/Joint Security Area work six days a week on a base cut off from the rest of South Korea by the restricted &#8220;Freedom Bridge.&#8221;

It&#8217;s not for everybody, they freely admit. But some of the soldiers handpicked for this duty voluntarily spend several years at Camp Bonifas, a stone&#8217;s throw &#8212; and be careful where you throw that stone &#8212; from the Demilitarized Zone.

Saccomen had only a foggy concept of the Joint Security Area, which straddles the North/South Korean border under U.N. supervision.

He learned quickly on his first morning there, when sounds of alarms and bullets filled the air.

Saccomen ran outside, to the amusement of his fellow soldiers. The bullets were fired in a nearby shoot house. It was just a little &#8220;welcome&#8221; to the JSA.

For each position available, Gogue receives two soldiers to choose from based on their skills, records and past evaluations.

&#8220;You can tell right away if the soldier is enthusiastic about the assignment,&#8221; Gogue said.

Incoming soldiers likely are to receive extensive instruction in Korean customs from Gogue, a Guam native who has been informally adopted by a South Korean couple. They are roughly his parents&#8217; age; he calls their son his brother.

Gogue also is noticeably closer to his battalion than most in his position. It&#8217;s largely the result of a transformation in 2004, when 250 of the 600 soldiers in the battalion were U.S. soldiers. Now, there are only 38, and the remainder are South Korean.

It isn&#8217;t strange here for the sergeant major to interact with lower enlisted troops, or for that matter, for a field-grade officer to shoot darts with a specialist during rare moments of down time.

Unlike Saccomen and Gogue, Cottone expects to be at JSA for one year, then move to an accompanied assignment with his family.

After four years as a recruiter, Cottone&#8217;s tour is a return to a slightly more regular Army lifestyle, and an opportunity to improve his physical performance.

With limited entertainment options, working out is favorite pastime for many Camp Bonifas soldiers. Cottone&#8217;s idea of a day off last week was a rucksack march. Soldiers also go to Munsan, the nearest town over the Freedom Bridge, for relaxation.

The battalion also mixes frequently with South Korean soldiers and the multinational servicemembers from the U.N. Military Armistice Commission for everything from basketball to beginner cricket matches.

They don&#8217;t have anything nearby like Seoul&#8217;s Itaewon bar scene or a Wal-Mart-size post exchange on base. They make trips to Seoul when they can. And for several of these soldiers, there is nowhere else in South Korea they would rather serve.

Sgt. Douglas Long, a Camp Bonifas soldier since 2002, said he often gets asked why he enjoys his post but didn&#8217;t have any one reason.

DMZ facts and figures...&#182; The 1953 armistice that ended hostilities between North and South Korea established the United Nations Military Armistice Commission. UNCMAC is a multinational force charged with preserving the armistice diplomatically.

&#182; UNCMAC Joint Duty Officer Capt. Tamara Kisinger-Yolo, a West Point graduate, is the first and only active-duty female to serve at the JSA. She doesn&#8217;t consider herself a trailblazer but says &#8220;it&#8217;s refreshing that the Army is picking soldiers who they think are qualified for the position.&#8221;

&#182; The town of Tae Sung Dong, or &#8220;Freedom Village,&#8221; exists entirely within the DMZ. About 250 people live in this farming village, pay no taxes and earn an average of about $80,000 a year per person. Each resident must live there 240 days out of the year. Women can marry into the village but men cannot.

&#182; A South Korean quick-reaction force is housed within the DMZ. Its record time for arriving at the JSA in full battle gear, about a mile away, is 42 seconds.

&#182; More than 300 South Korean factories are expected to be operating by 2007 within a special zone on North Korean soil, using North Korean labor. Discussions are under way to add a theme park by 2011.

&#182; Four tunnels, some several hundred feet deep, have been discovered leading from North Korea to the South. Officials believe other tunnels probably exist.

&#182; Officers of the 8th Army U.N. Command Security Battalion are nicknamed &#8220;The Monks&#8221; for their work habits and isolation from other units.