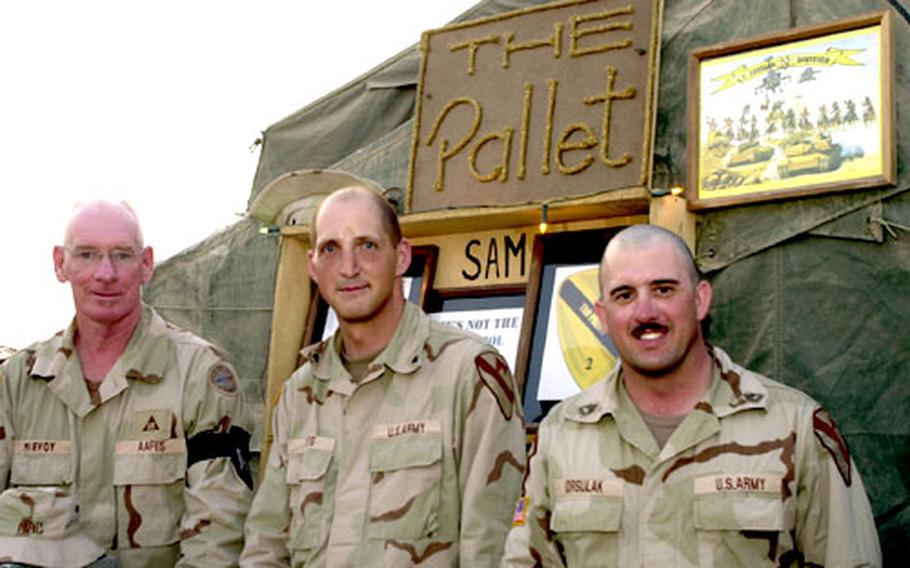 CAMP BLACK JACK, Iraq &#8212; At night, aglow from a couple of strings of Christmas lights, long-neck beer bottles on the ramshackle bar beckon like a desert mirage to soldiers trudging across the camp&#8217;s barren expanses.

Obviously, with soldiers in Iraq under General Order No. 1, The Pallet couldn&#8217;t be a bar in the real-world sense.

It&#8217;s not a conventional bar because customers can&#8217;t even &#8220;buy&#8221; a drink. Instead, they make donations, then choose between two or three non-alcoholic beers including Becks, Bitburg Drive or Budweiser NA.

&#8220;Pay your respects before you sit down. You have to pay your respects,&#8221; said Spc. Theo Jones, who volunteers as bartender and disc jockey when not soldiering with the 1st Cav&#8217;s 3rd Battalion, 82nd Field Artillery Regiment.

After that, management suggests customers take a load off.

The few square feet of bar, memorial, stools, chairs, tables and milling-around space seem almost detached from a base where in just three months, a high percentage of the soldiers have seen combat in one form or another in the Baghdad neighborhoods, and where mortar attacks are a daily event.

The Pallet may be the only, well, whatever it is of its kind. The name &#8220;Pallet&#8221; was inspired by the pallets of goods always moving around behind the tiny Army and Air Force Exchange Services post exchange.

Committee members share duties such as stocking the beer, putting ice in coolers and CDs in the jam box. Jones is most often the friendly face of The Pallet, handing out cold ones and changing CDs.

Members plan on collecting memorabilia from the Fort Hood, Texas-based 1st Cav&#8217;s rotation, then maybe starting a Pallet back in the real world, Orsulak said.

So far, the crowds are small.

&#8220;Intimate,&#8221; is how Orsulak puts it. With no way to advertise, the crew knows it&#8217;ll take time for word of mouth to work its way around Black Jack, which is a huge section of the even larger Camp Victory North, 1st Cav headquarters in Baghdad.

Orsulak and Jones often wave in passing soldiers. Or curious soldiers are drawn to lights and clusters of beer drinkers. Spc. Jaime Saintignon said she and her group were just walking by on a recent evening when they saw The Pallet.

If soldiers are looking to get a buzz, good luck to them.

If they&#8217;re looking for a warm welcome and a cold brew, this is it, Ingram said.