Camp at Babadag, Romania, may be a model for the future of Army training 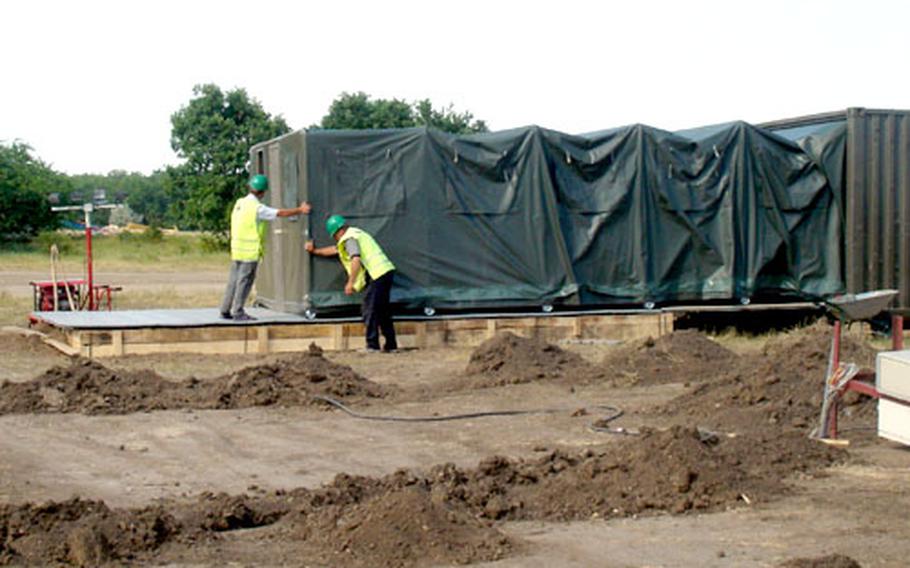 Workers roll out a tent at a temporary training base in Romania. The tents, which are about 1,300 square feet in size, fold into trailers for quick setup and breakown. (Photo Courtesy of Shipsup Group)

Workers roll out a tent at a temporary training base in Romania. The tents, which are about 1,300 square feet in size, fold into trailers for quick setup and breakown. (Photo Courtesy of Shipsup Group) Sgt. John Henrichsen, a Texas National Guard medic, buys chewing tobacco at a temporary post exchange set up to serve 1,400 people living on a temporary base camp in Romania. Soldiers said they were surprised to find more creature comforts in a temporary camp in Romania than what they are used to at training bases in Texas. (Russ Rizzo / S&S)

BABADAG TRAINING AREA, Romania &#8212; A walk around the 50-acre plot of land that U.S. and Romanian soldiers will call home for nearly three weeks offers a glimpse of the likely future of Army training.

Months ago, it was a barren field in the Romanian countryside accessed by a few dirt roads. Now, it is a bustling tent city with a population of 1,400 troops and civilians living with many of the creature comforts of home.

As U.S. military officials look east of Germany for bases to train soldiers and deploy them for combat in other areas, they are looking at places like Babadag, which offers relatively unrestricted firing ranges and close access to an airfield and a port. U.S. officials have said, at least for now, that new bases would remain small places with little infrastructure where soldiers could pop in for a few weeks and leave.

That means the Badabag experience could become the norm for troops. Currently, 650 Texas National Guard soldiers, 300 Germany-based 1st Armored Division and 7th Army Training Command soldiers and Air Force members from Spangdahlem Air Base, Germany, are training at the area along with 400 Romanians.

Instead of completing annual training in Fort Hood, Texas, the guardsmen are running through brush alongside Romanian soldiers, 50 miles northwest of the coastal city of Constanta. When they leave, the camp will disappear.

The exercise proves that the U.S. military can quickly deploy to places such as Romania before heading onto war somewhere else, said Maj. Jeff Anderson, executive officer for 1st AD&#8217;s Engineer Brigade, which runs ROMEX &#8217;05. The division also directed a smaller joint training program in Bulgaria this month, proving that the Army can run two simultaneous exercises, Anderson said.

The United States is negotiating with Romania and Bulgaria to gain more access to training areas there.

In Romania, soldiers live in 83 air-conditioned tents and eat a hot breakfast and dinner each day in cafeterias that seat up to 480 people. They have access to a gym, an Internet cafe, a laundry service with a three-day turnaround, flushing toilets, hot showers and cigarettes sold in a post exchange operated out of a trailer. The only permanent structures on the base are three out-of-commission wash stations and two barracks that are not used for the exercise.

National Guard soldiers said they were surprised to find living conditions better here than at the Fort Hood training area. The tents are just as nice as anything they&#8217;ve lived in there, they said. And regular access to a post exchange, Internet point and hot showers is a bonus.

Even the food is better, they said. The kitchen served lobster, shrimp and crab legs Saturday night.

During two weeks of training, the soldiers spend one day doing community work in a nearby village and one day at the beach &#8212; experiences they would not get in Texas.

When training finishes Aug. 2, Shipsup Group, the contractor responsible for setting up the base, will pack the tents and trailers used as offices onto trucks and ship them away. They&#8217;ll leave behind the electricity grid, Internet wiring, a gravel parking lot and possibly the sewer system that serves 110 portable flushing toilets, said Teufik Moran, Shipsup general manager and the camp manager.

To accomplish the military&#8217;s short timetable for setting up the base, which Moran said was built in 45 days, the company designed tents that fold into trailers like large accordions. Workers bring the trailers on trucks, put down wooden frames covered with plastic flooring and pull the tents over them.

The company is developing plastic coverings that can be used as temporary roads in other exercises.

This is the largest temporary base Shipsup Group has built, Moran said. It will serve as a model for future exercises.

Babadag by the numbers ...