Camp Arifjan NCO ready to compete against the best 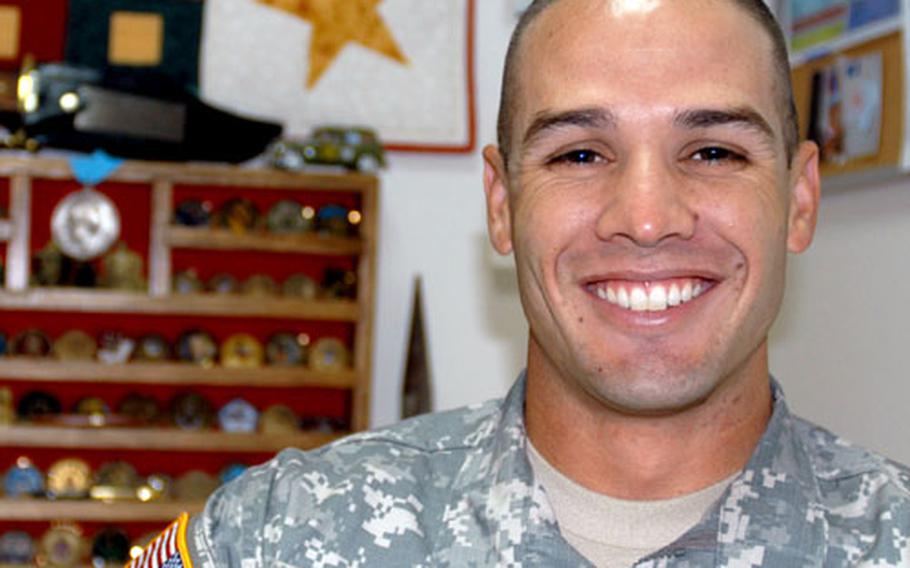 Sgt. 1st Class Jason H. Alexander will be one of 10 soldiers competing next week at Fort Lee, Va., for top Army NCO of the Year honors. (Jennifer H. Svan / S&S)

CAMP ARIFJAN, Kuwait &#8212; What does it take to be the best noncommissioned officer in the Army? Sgt. 1st Class Jason H. Alexander, Troop Medical Clinic NCO for Area Support-Group Kuwait, is about to find out.

The five-day event, also being called the Best Warrior Competition, will put soldiers through a series of tests to gauge Army knowledge, physical fitness and combat and leadership skills.

Command Sergeant Major of the Army Sgt. Maj. Kenneth Preston heads up the board, on which also sit about half a dozen command sergeant majors from the Army&#8217;s major commands, Alexander said.

After being named the best NCO for Army Central in July, Alexander went on to win top NCO for Forces Command at Fort Hood, Texas, in August. Forces Command represents the Army&#8217;s large combat divisions.

Some preparation is involved. Army manuals and study guides are available, but Alexander expects a curveball or two from the board.

The remaining days will be filled with marksmanship; fitness tests; a written exam of 50 questions; gear inspection; an essay with an unknown topic; day and night land navigation in urban terrain; and &#8220;warrior tasks&#8221; such as first aid or reacting to a nuclear, chemical or biological threat. There won&#8217;t be much downtime.

Alexander joined the Army at 19 after a stint in college. &#8220;I needed more in my life. I needed direction, something that would make my family proud, as well,&#8221; he said.

&#8220;He&#8217;s very professional; he&#8217;s very dedicated to his soldiers and his mission. He spends a lot of his personal time making himself a better soldier and better noncommissioned officer,&#8221; Ashe said.

The Army&#8217;s top soldier and NCO of the Year will be announced Oct. 9 at the Association of the United States Army sergeant major luncheon in Washington, D.C.