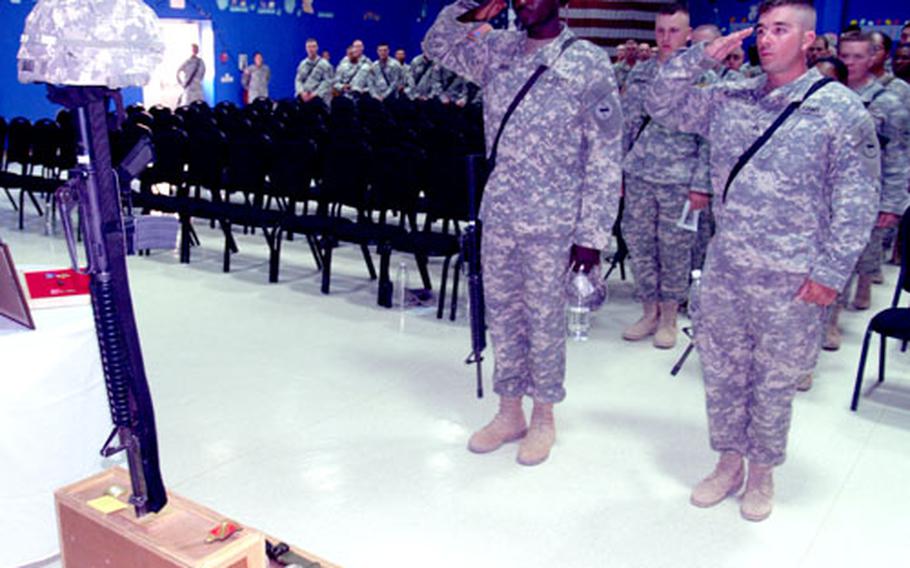 Many were choked up with emotion.

All were moved by the loss of Pfc. Joseph Love, 22, of Company B, 84th Engineer Combat Battalion, who was killed Sunday by a roadside bomb.

About 350 friends and colleagues gathered Tuesday at Camp Anaconda to pay their final respects to Love, of Sacramento, Calif. Among them was Spc. Richard Obleada, 33, who was in Love&#8217;s convoy when Love was killed.

Obleada, of Virginia Beach, Va., said he remembers last seeing Love being put on a helicopter.

Obleada described Love as a man who lived life to its fullest and was fully committed to being a soldier.

He said he will always remember Love&#8217;s smile and laugh.

Pfc. Albert Tagoe, 24, said Love was an outspoken person, and that sometimes got him into trouble.

Once Love presented his weapon for inspection without cleaning it, said Tagoe, of New York.

When Love&#8217;s sergeant noted that the weapon was dirty, Love feigned indifference and said that it could still fire while dirty, Tagoe said.

&#8220;He paid dearly for his outspokenness that morning, but his weapon was never below standard again,&#8221; Tagoe said.

Love&#8217;s company commander, Capt. Andrew Marshall, said he had the privilege of twice promoting Love and looked forward to promoting him yet again.

Love always wanted to get into the action, said Marshall, 30, of Sacramento, Calif.

&#8220;That Private Love, always volunteering for something,&#8221; Marshall said, choking up.

Battalion commander Lt. Col. Mark Toy called Love &#8220;one of the most dedicated soldiers in the battalion.&#8221;