Personnel work to tow a stricken truck back to a U.S. base near Balad, Iraq. The driver blamed the breakdown on motor problems. (Jeff Schogol / S&S)

Personnel work to tow a stricken truck back to a U.S. base near Balad, Iraq. The driver blamed the breakdown on motor problems. (Jeff Schogol / S&S) 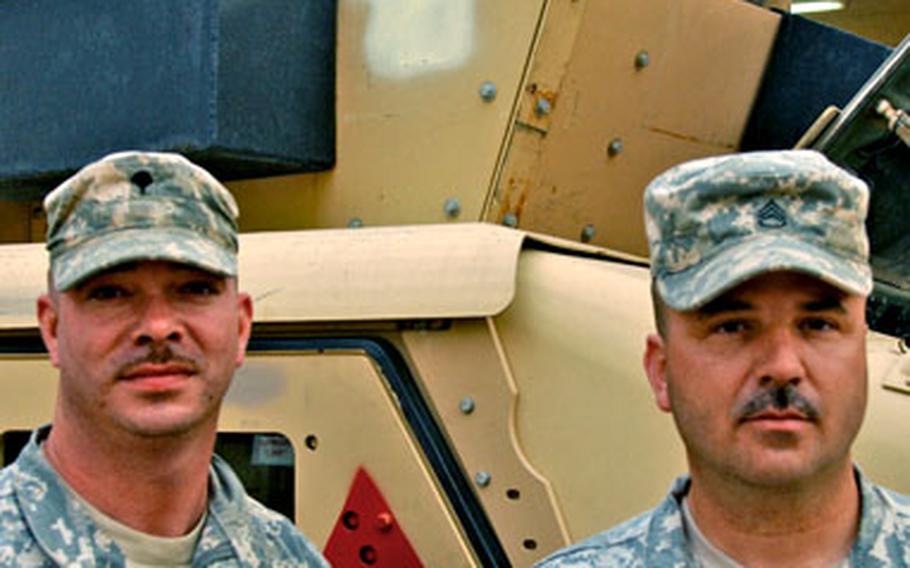 A truck carrying equipment to Camp Anaconda has broken down outside the wire, near the town of Balad. Within minutes, weary soldiers with a recovery team are piling into two Humvees and two Armored Security Vehicles, ready to head out.

Staff Sgt. Ray Coleman, 40, the convoy commander, said his team gets between four and five such calls per week, but sometimes they can respond to as many as three per day.

Coleman, of Battery B, 5th Battalion, 113th Field Artillery Regiment, said his team had the day off, but they are always on call for cases like this one.

Coleman, of Greensboro, N.C., explains that the convoy has to &#8220;bob and weave a lot&#8221; to avoid potholes and other possible sites for roadside bombs.

Coleman and other soldiers call out when they see debris by the roadway so that Fox can swerve to avoid them.

Fox mentions that, when he gets back home, he will probably swerve the first time a plastic bag blows across the roadway.

After about 45 minutes, the convoy reaches the stricken truck, a flatbed carrying construction equipment. Asked what is wrong with his truck, the driver simply says, &#8220;Motor.&#8221;

Within a few minutes, the truck has been hooked up to a tow truck and the convoy begins to head home as it starts getting light.

But the daylight reveals new threats.

On the way back to base, the convoy sees some pickup trucks stopped ahead of them.

After the convoy crosses into oncoming traffic, Humvee gunner Spc. Aaron Crudup, 21, reports that it appears the people from the pickup trucks are digging a hole to plant a roadside bomb.

Coleman reports the suspicious vehicles to the quick reaction force and the convoy keeps rolling.

Shortly afterward, Crudup, also of Greensboro, reports he sees another possible site for a roadside bomb &#8212; a downed telephone pole.

The convoy keeps moving until it reaches Camp Anaconda.

As it nears the base, the convoy comes across some Iraqi children. One Iraqi boy flips off the soldiers.

Fox, of Lenoir, N.C., said some Iraqi children will thank American troops as convoys go by, but then yell curses if the troops don&#8217;t throw them something, like candy. Fox said he learned early on not to throw candy at Iraqi girls, because Iraqi boys will beat them up and take the candy away from them.

Once, he did throw some candy to an Iraqi girl, who received a right hook from a little boy, he said.