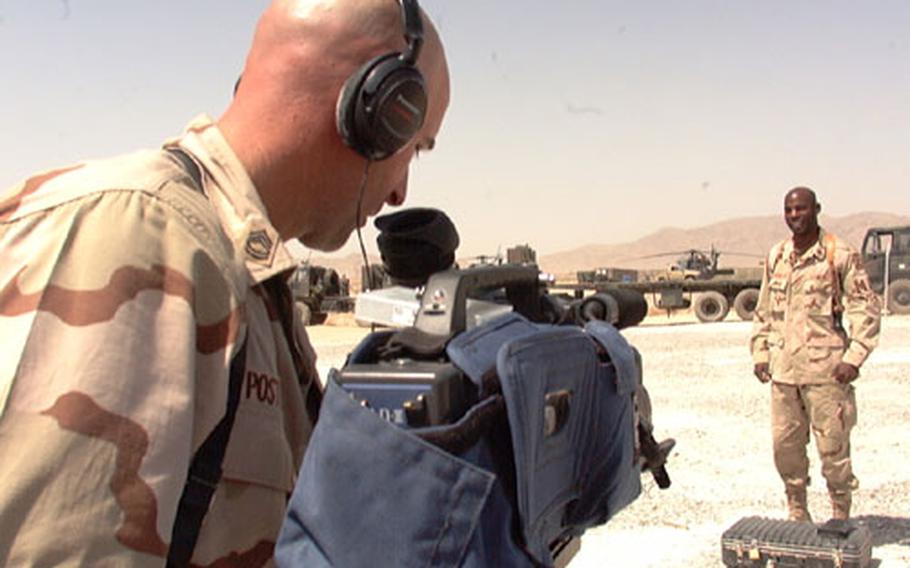 KANDAHAR, Afghanistan &#8212; While it may seem odd for soldiers to be standing in 100-degree weather in mid-September offering season&#8217;s greetings, come Christmastime the messages will mean the world to their families in the States.

The Army and Air Force Hometown News Service is recording the holiday greetings at the U.S. air bases in Kandahar and Bagram this week, and then moving on to Iraq next week, according to Sgt. 1st Class Jamie Posten, team leader for the three-man Southwest Asia team.

The team, which also includes Staff Sgt. Peter Rimar and Spc. Luciano Vera, is also going to Kuwait and the African country of Djibouti, Posten said.

The teams &#8212; there are two others, in the Europe and Pacific regions &#8212; record the greetings in September, then start distributing them to anxious local stations when they return to their base in San Antonio, Texas.

&#8220;The television stations usually [air] them during their local newscasts,&#8221; Posten said. &#8220;They know we produce them in September, so they start calling us asking where the messages are.&#8221;

And the families really do see the messages.

Washington, a member of the 274th Military Police Company from the Washington, D.C., National Guard, said he got to see a videotaped version of last year&#8217;s greeting.

The program both boosts soldier morale and caters to families of deployed soldiers.

&#8220;It gives the soldiers and airmen an opportunity to get a message back home,&#8221; Posten said. &#8220;But this is for families, too. It lets them know where their sons and daughters are. To see them during the holiday season means a lot to them.&#8221;