Cameras are everywhere in the U.K. 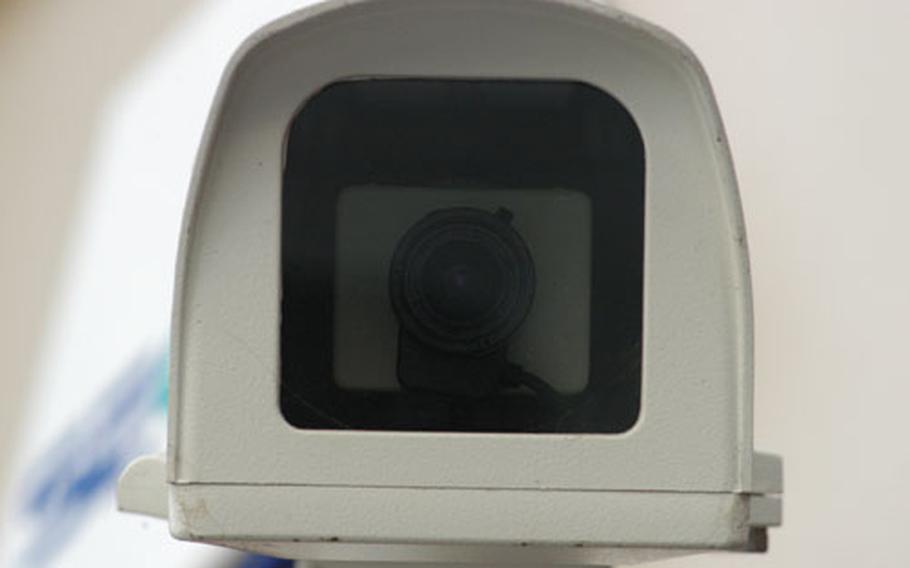 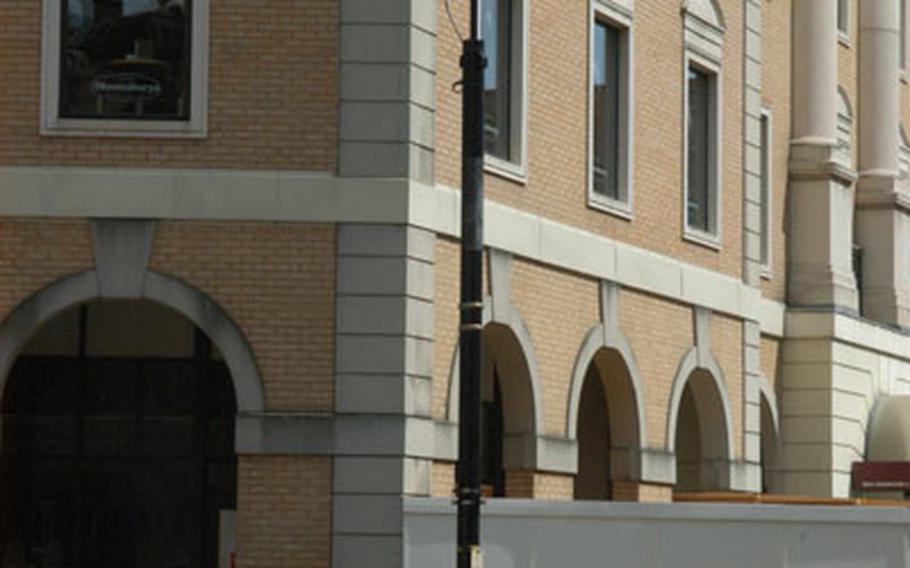 Most CCTV cameras are like this one in downtown Cambridge: elevated, easy to not see and able to move at the controller&#39;s will. (Geoff Ziezulewicz / S&S) 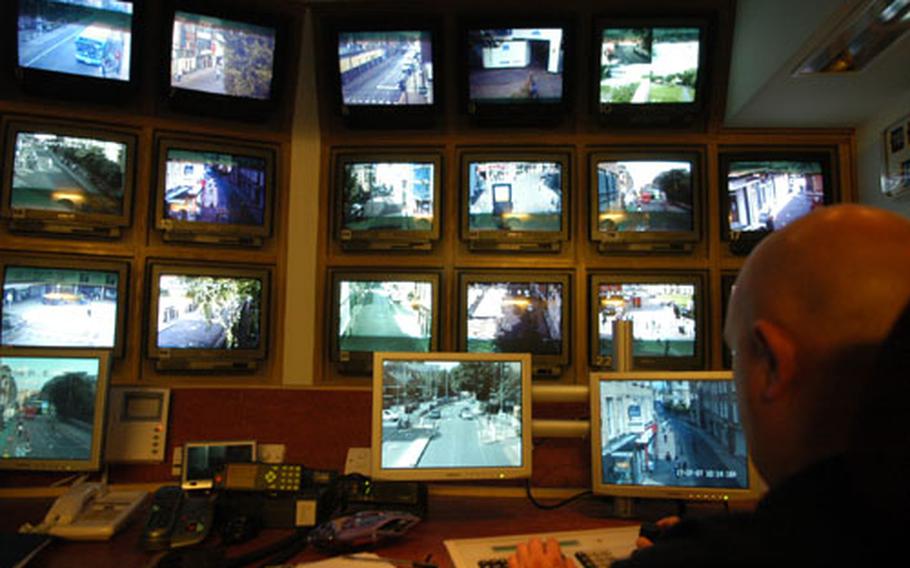 CCTV supervisor Andy Fleming said that operators like the one shown here are able to notice any suspicious flicker on the various monitors after they become more experienced. (Geoff Ziezulewicz / S&S) 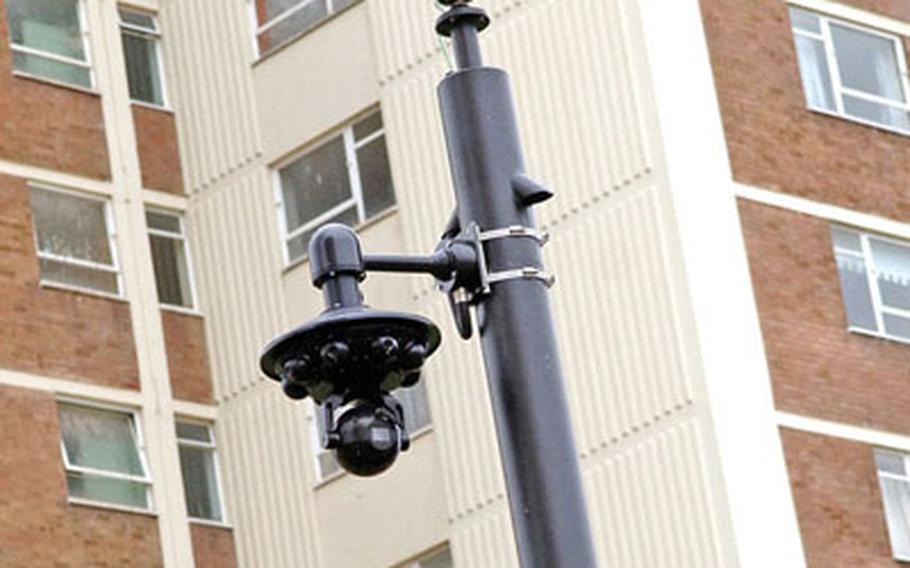 Eight lenses scan in 360 degrees, and a ninth camera focuses in on a person if the camera&#39;s computer thinks he or she is acting suspicious. (Courtesy of Viseum) 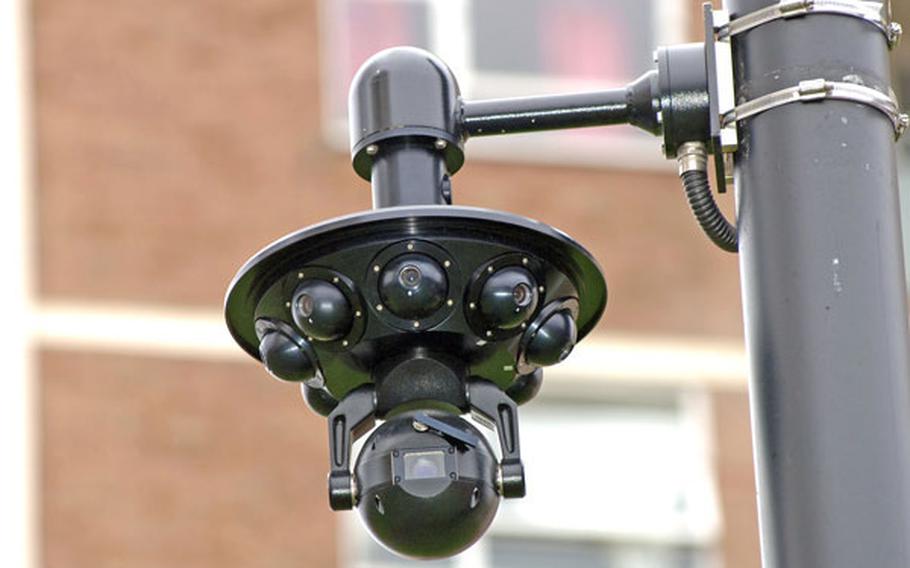 The Bug is a new kind of camera that picks up on people&#39;s body language to determine if they&#39;re about to commit a crime. (Courtesy of Viseum)

To the amusement of Police Constable Mark Arnold of the Cambridgeshire police, the suspect&#8217;s jump-kick finally shattered the driver&#8217;s side window. Instead of unlocking the door, the man then crawled through the hole.

Within three minutes, police were on the scene and the car thief was arrested.

When not capturing criminals in the middle of the night, Cambridge&#8217;s system also catches thousands of people on tape going about their daily business.

Repeat this countless times, in endless cities and towns across the country, and the state of public life becomes apparent.

The United Kingdom is a country under watch.

Approximately 4.2 million closed-circuit television cameras now operate in Great Britain, one for every 14 citizens, according to a 2006 report to the Information Commissioner by the Surveillance Studies Network. The extensive surveillance system in London is known as the Ring of Steel.

A total of 500 million pounds, or about $1 billion, has been spent on the systems in the past decade, according to the report. During the 1990s, 78 percent of the Home Office&#8217;s budget went toward such systems.

But while supporters tout CCTV as an effective tool against crime and terrorism, skeptics question its overall efficacy and the potential problems it poses for privacy.

&#8220;The expansion of CCTV was done very quickly&#8221; in the U.K., according to Pete Fussey, a senior lecturer in criminology at the University of East London who has written on the subject. &#8220;It was sold to the public as a quick fix. Obviously we know it is not.&#8221;

From terrorism to petty crimeCCTV got its start around London in response to the Irish Republican Army and its terrorist campaign of bombings, but about a decade ago the system really started to spread across the country, Fussey said.

As crime rates climbed, CCTV was billed as a solution to &#8220;anti-social behavior&#8221; and a variety of other crimes, he said. Combine that with money to spend and an accepting public, and the network was born.

Among other incidents, CCTV gained national attention in 1993 when 2-year-old Jamie Bulger was abducted from a shopping mall, said Martin Beaumont, who oversees the Cambridge CCTV system.

The initial instinct of police was to start pursuing pedophiles, but CCTV footage showed the child being led off by two 10-year-olds who later murdered him, he said.

CCTV has proven itself in deterring certain kinds of crimes, Fussey said. It is effective when watching parking lots and against property crimes, he said.

But violent or impulsive acts such as drunken brawls have not seen a decline in the U.K. because of CCTV, he said. Not much is going to stop a man who&#8217;s had eight pints of lager and wants to brawl, he said.

Studies by the U.K.&#8217;s Home Office have failed to show whether CCTV is definitely deterring crime, he said, and the system itself has been sold in different ways to the public.

Ben Cook, a force crime reduction officer with the Suffolk Constabulary, likened the system to an insurance policy.

Where&#8217;s the proof?Still, governments in the U.S. and the U.K. have never proven a need for such a system &#8212; one that couldn&#8217;t be met by increasing the number of police on the streets or other options, said Steve Block, an official with the American Civil Liberties Union&#8217;s Washington, D.C., office.

While officials in the States and in the U.K. prop up CCTV as a tool against terrorism, it hasn&#8217;t proven itself effective at actually preventing attacks, said Melissa Ngo, an official with the Electronic Privacy Information Center, a Washington, D.C.-based privacy and civil liberties advocacy group.

While the system did help capture the failed car bombers earlier this month in London and Glasgow, it does nothing against terrorists who succeed, she said.

There is also concern, on some fronts, that CCTV could be used for racial profiling, or could be misused in other ways, Fussey said.

The propensity of abuse cannot be ignored, Ngo said.

Back at the Cambridge monitoring center, Beaumont said that any employee caught misusing the cameras can be fired and even prosecuted.

If someone is following an attractive member of the opposite sex or peeping into windows, he could even be placed on the U.K.&#8217;s sex offender registry, he said.

Nobody from the Cambridge shop has been fired for improper monitoring, Beaumont said.

The system also has helped prove innocence, Beaumont said, recalling a case where a man was accused of rape. Once police reviewed the tapes, he said, the man&#8217;s innocence became apparent.

CCTV in the U.K. certainly isn&#8217;t going anywhere, Fussey said. While older systems may be left to die, there are plenty of innovations coming over the horizon.

The 162 cameras in Cambridge and the surrounding areas enjoy an approval rating of about 78 percent among residents, Beaumont said. The system also has wide approval ratings throughout the U.K., Fussey said.

Next generation of devices include body-language monitors

Cameras watching the U.K.&#8217;s public spaces have been a regular part of life for the past decade. Here&#8217;s a glance at a few of the initiatives in development that could take video surveillance to the next level.

The prescient camera: An intelligent camera is being developed that will assess a person&#8217;s body language to determine if he or she is about to commit a crime.

The Bug, named because its eight lenses make it look like an insect, is getting rolled out this year, according to one of its inventors, Stuart Thompson, of the English company Viseum, which specializes in security products.

The device consists of eight cameras scanning in 360 degrees, Thompson said. It uses software to detect whether someone is walking or loitering in a way that is suspicious. A ninth camera then follows them if they&#8217;re deemed to be acting dodgy.

The camera is programmable and relies on software that picks up on people&#8217;s body language, he said, adding that it&#8217;s a more economic option for local governments because it doesn&#8217;t require a person to monitor.

But not everyone is sold on The Bug.

&#8220;On the things like shoplifting, I think it&#8217;s very ineffective,&#8221; said Pete Fussey, a senior lecturer on criminology at the University of East London who has studied CCTV. &#8220;All the success stories you hear are people in the industry who are trying to sell them.&#8221;

The talking camera: Cameras that enable the operator to speak are being rolled out in various communities across the U.K. The scheme, backed by the U.K.&#8217;s Home Office, is set to be extended nationwide after successful trials in Middlesbrough.

The cameras already are being used in the city of Ipswich, said Ben Cook, a force crime reduction officer with the Suffolk Constabulary.

Cameras that eavesdrop are illegal under the U.K.&#8217;s Data Protection Act, according to Fussey.

But like standard CCTV, it&#8217;s unclear whether speaking cameras are effective on various types of crime, he said.

Fussey is not so sure about stories he&#8217;s heard, like that a drunken person who litters will pick it up if a camera tells him to.