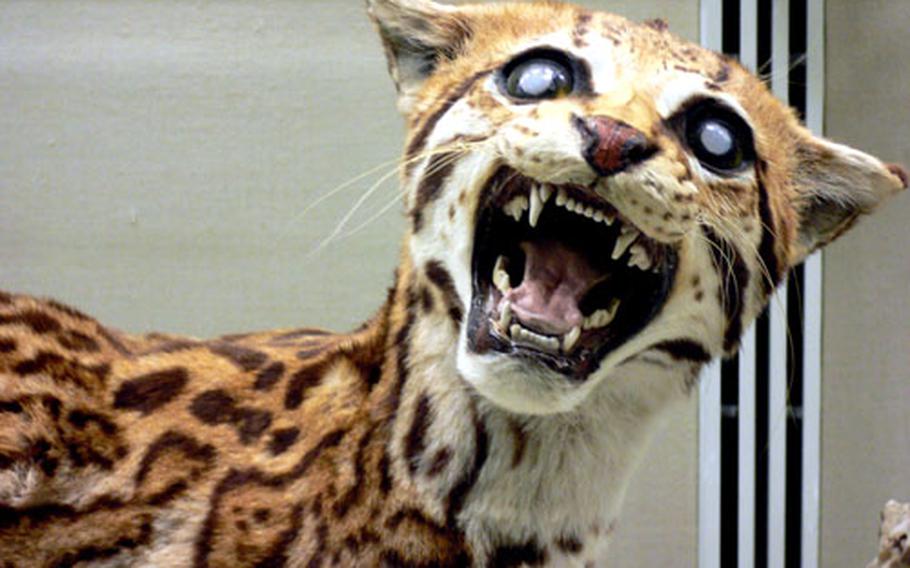 A stuffed South American ocelot glares out at visitors from a display case. (Ben Murray / S&S)

A stuffed South American ocelot glares out at visitors from a display case. (Ben Murray / S&S) 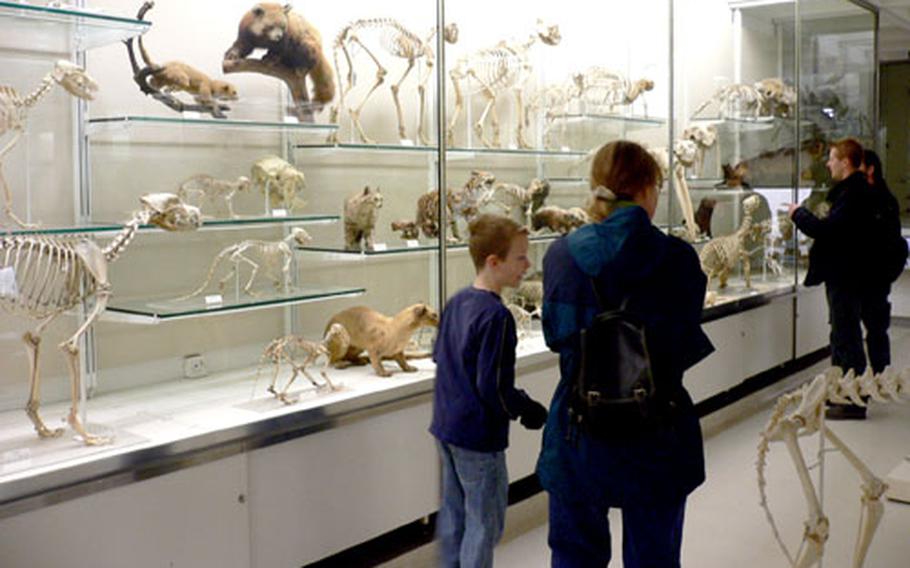 Visitors to the University Museum of Zoology Cambridge peruse a display of mammals. (Ben Murray / S&S) 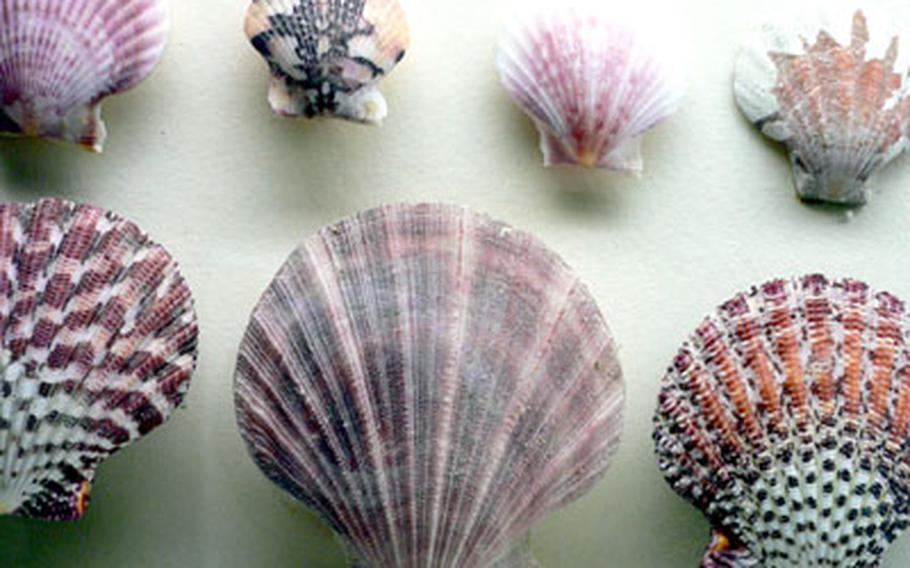 This group of scallop shells is part of the University Museum of Zoology&#39;s displays on early forms of sea life. (Ben Murray / S&S) 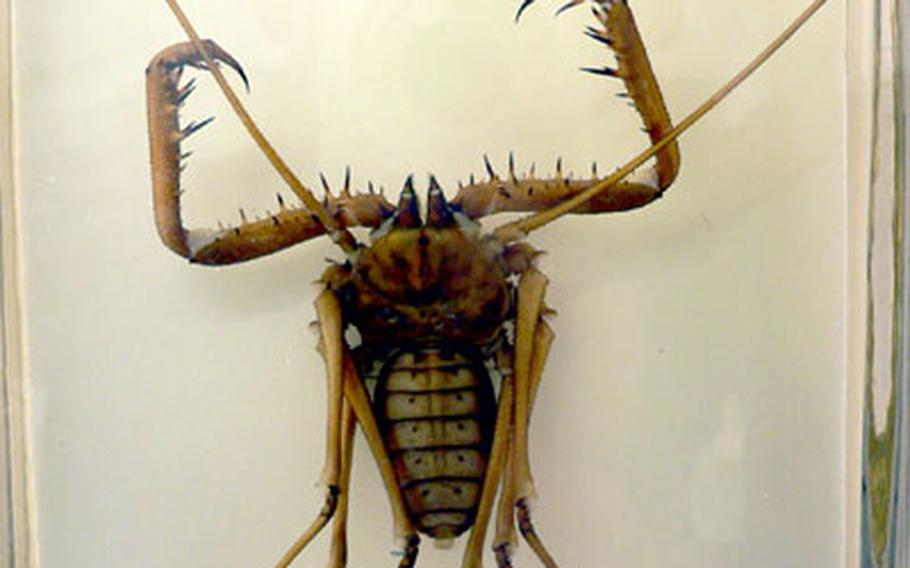 Suspended in a glass jar at the museum is a Mexican scorpion killer. According to the display, the creepy crawler uses the long antenna-like legs to coax scorpions to approach it, then strikes with the barbed forelimbs. (Ben Murray / S&S)

It&rsquo;s a big, creepy, tentacled world out there, full of spines and antennae and ugly little creatures with bulging eyes and &ldquo;mouthparts.&rdquo;

It&rsquo;s a place where rhinos and carnivorous plants share living spaces with insects the size of baseball mitts, and entire species of bugs evolve simply to eat &mdash; get this &mdash; bats.

If that kind of zoological diversity is something that fascinates rather than repels you, then there&rsquo;s a place in central Cambridge that will have you straining to get a closer look at the petrified mollusks and embalmed frogs.

It&rsquo;s the University Museum of Zoology Cambridge on Downing Street, and it&rsquo;s an interesting cross between education and fascination.

Relatively small and tucked between working classrooms and labs at the University of Cambridge, the zoology museum is divided into two distinct levels, one for small displays, the other for the big mammals.

In the upstairs portion, signs that the facility is part of a world-renowned educational institution are at their most evident.

Starting with some of the oldest species in the world, various types of fish, sharks and crustaceans are arranged by their phyla and genera and often dissected to show their most notable evolutionary features. Their descriptions are written for the scientific mind, including a lot of Latin and references to unpronounceable elements of anatomy or geological eras, which might sound uninteresting if not for the sheer ugliness of animals such as the blood-sucking sea lamprey.

Moving up through some of the early reptiles and amphibians (including a massive, football-sized toad) visitors can look at the skull of a prehistoric tortoise and the teeth of a tyrannosaur, though they may not understand all the lingo intended for zoology students.

Moving on, visitors come to the skin-crawling world of the invertebrates, including everything from harmless purple coral specimens to the &ldquo;Mexican scorpion killer,&rdquo; a hideous alien-looking insect from the tropics.

The atmosphere of the museum is made all the more Cambridge-like by the way the creatures are displayed, often in thick glass jars that appear to have been prepared decades ago. Lacking colorful informational aides, the museum instead has rows of insects and animals lying bleached and wrinkled in their embalming fluids.

Downstairs, however, the museum gets more tactile and, in general, more exciting. Here the museum showcases the big animals of its collection, mostly in the form of skeletal reproductions.

The displays here are arresting mainly because there is no barrier between the visitors and the bones, allowing people to stand next to a full-sized re-creation of a rhino or elephant seal and get an appreciation for just how giant they must be in life.

Along with glass display cases showing the stuffed versions of some smaller animals such as the elusive ocelot or toothy leopard seal, the downstairs area allows visitors to get within arm&rsquo;s reach of many interesting &mdash; and hippopotamus-huge &mdash; species.

There&rsquo;s a trade-off to be had at the Cambridge museum, however. Because it is a working part of the school, entrance to the exhibits is free, but parts may be closed off for class work or lab research.