Cambridge: Spend some cold days on a cool ice rink 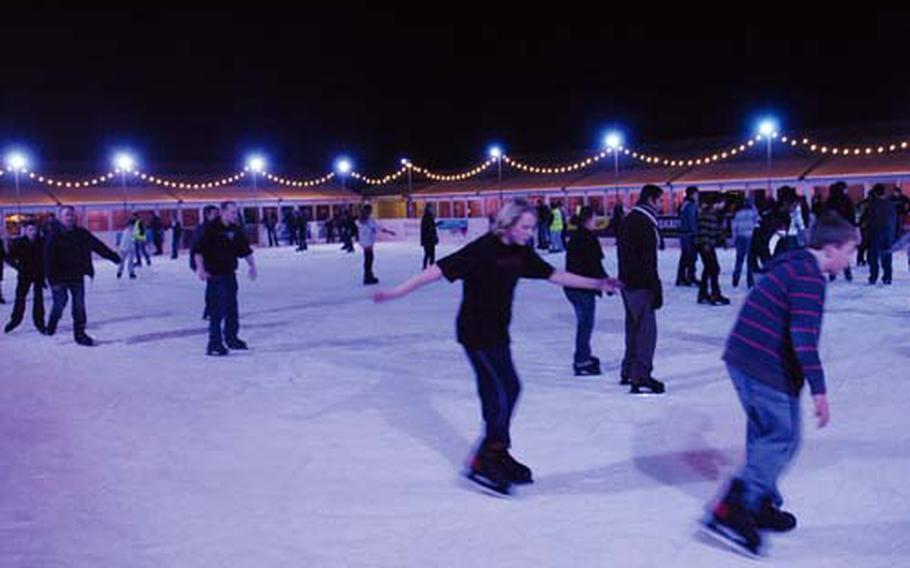 Skaters enjoy the rink at Cambridge on Ice, which runs through Sunday. (Geoff Ziezulewicz / S&S)

CAMBRIDGE &mdash; What&rsquo;s more entertaining than watching "It&rsquo;s a Wonderful Life," a decent way to work off the general overeating during the month of December and fun for both young and old?

You got it. Ice skating!

It&rsquo;s the quintessential winter activity, and it&rsquo;s accessible to the masses, thanks to the good folks at Cambridge on Ice. Less cumbersome and certainly cheaper than skiing, the beauty of ice skating is that it still requires us to unplug from the modern world for a few minutes and have a little good old-fashioned fun.

One of the coolest things about ice-skating is that unless you&rsquo;re good at it, you pretty much stink at it. So there&rsquo;s no need to feel bad if you&rsquo;re not Ice Capades material. You will be in good company. Wobbling around the ice like a spaghetti-legged toddler, laughing arm-in-arm with a fellow (and probably equally as uncoordinated) skater is what it&rsquo;s all about. Busting your butt at least once is inevitable, so it&rsquo;s best not to fight it.

In its second year, Cambridge on Ice has set up its wintery fun in Parker&rsquo;s Piece, the park situated on the northwest corner of Mills Road and the A603. It&rsquo;s a little commercial and packed to the gills with people, but unless you have a frozen pond in your backyard there&rsquo;s not much to choose from if you&rsquo;re in the mood to ice skate.

England may not get a lot of snow, but at least it&rsquo;s cold enough to ice skate outdoors. Just in case of unseasonably warm weather, the operation is shored up with refrigeration, according to the friendly ice skating elves who run the setup. But the rink is not covered, so rain can be a problem. And they don&rsquo;t give refunds for inclement weather.

It seems like a popular destination, drawing folks from around East Anglia, not just Cambridge locals. Reservations are recommended. They even have a parent-toddler skate on Wednesday and Friday, from 9 &ndash; 10 a.m., to get the little ones out on the ice without the hazards of bumbling adults and bigger kids lurking about.

So, while your kids might notice if you cancel the skiing holiday for an afternoon at the ice rink, it&rsquo;s still a winter sport everybody can enjoy on a budget. You&rsquo;re pretty much guaranteed a laugh.